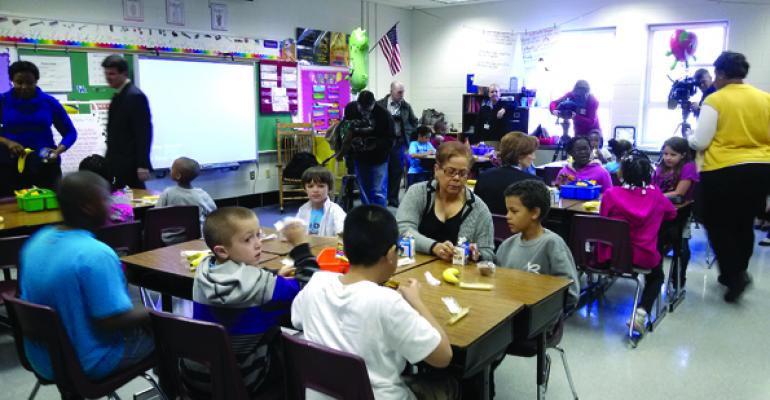 The Breakfast in the Classroom initiative looks to rework how school morning meals are delivered and to extend them to more children, regardless of household income.

They say it's the most important meal of the day, and in many ways it is. Without breakfast, students’ attention spans shorten. Their energy levels plummet. Their productivity wanes and learning suffers.
But filling bellies in the cafeteria during those precious moments between when students step off the school bus and when classroom instruction begins is a time-strapped challenge for many districts.

“Breakfast in the classroom (BIC) programs allow schools to offer wholesome meals to all students, regardless of income level, without interfering with the flow of the school day,” says Walter Campbell, Director of Nutrition and Food Service, Charleston County School District, North Charleston, SC.

While many districts offer breakfast in the café, the in-classroom approach brings an entirely different set of challenges—logistical, custodial, and even culinary. But the advantages are just as significant: expanded participation, true universal service and an end to “free meal stigmatization.”
Early BIC programs showed so much promise that a group known as “The Partners for Breakfast in the Classroom”—the Food Research and Action Center, National Association of Elementary School Principals Foundation, National Education Association Health Information Network, and School Nutrition Foundation—joined forces to spread its use as a best practice.

Now in its third year, the Partners program seeks to help selected school districts start up BIC programs by helping defray initial startup expenses at specific schools in a district to help it get BIC programs off the ground. Food and other operating costs are still managed through the existing USDA breakfast meal program.

The BIC program has been funded by $3 and $5 million grants from the Walmart Foundation and, beginning in 2011, initially selected five large districts [Dallas, Little Rock, Memphis, Orange County (FL) and Prince George’s County (MD)] for grants. Since then the program has added ten additional districts ranging from Charleston County (S.C.) and Jefferson County Schools (Louisville, KY) to Denver and Des Moines Public Schools.

Once the BIC programs are in place, students enjoy nutritionally well-balanced foods like breakfast wraps, yogurt, or fruit served directly in their classroom or grabbed from a cart in the hallway outside.  Students then eat together while a teacher takes attendance, collects homework or teaches a short lesson plan.

In Jefferson County Public Schools (JCPS), 9,200 students at 19 of the district’s schools have access to a free breakfast.

“It’s been one of my long-term goals to implement a breakfast in the classroom program here,” says Julia Bauscher, Jefferson County’s FSD, who carefully assessed the needs of each of the district’s participating schools before launching the program last fall. “To make it a success, we needed to identify how the process would work from start to finish, taking into account facilities, equipment and staffing.”

JCPS enlists the help of student leaders to collect fully loaded soft-sided coolers from the cafeteria and roll them to the classrooms. Once the bell rings, each student collects the different components of the meal. They eat at their desks, then dispose of trash in special garbage bags which are placed in the hall for collection.

“The biggest benefit has been the direct impact on our students,” says Bauscher, who is working with a research firm to track the impact the breakfast program has had on JCPS students. “Preliminary data shows that tardiness and discipline referrals are down [by 238 tardies and 248 discipline referrals] compared to the previous year.”

Similar reactions are rolling in from Knox County Schools (KCS), Knoxville, TN, where 5,200 students at 13 of the district’s schools participate in the free BIC program.

“The level of support from the partners has been outstanding,” says Jon Dickl, Director of Nutrition at KCS. “Once we were awarded the grant we immediately began evaluating the schools most in need of the program. We faced a lot of logistical challenges as we have almost all multi-level elementary schools, but the support and help trouble-shooting made it a success.”