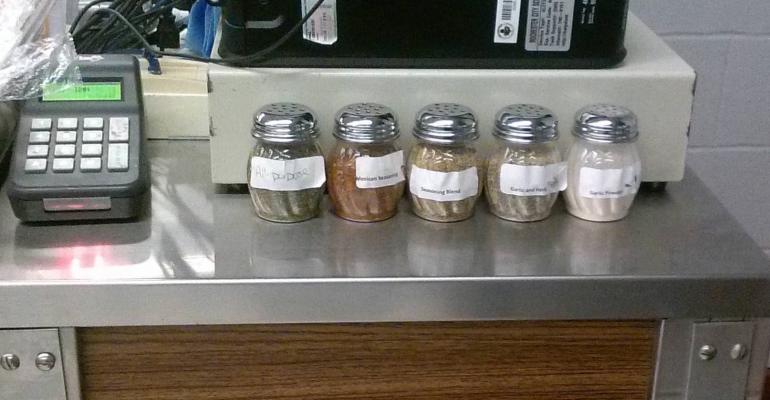 <p>Spice blends sit near the checkout to give kids in the Rochester City Schools an opportunity to customize the flavor of their meal selections without adding extra sodium.</p>
News & Trends>K-12 Schools

Selection of spice blends placed at the end of the serving line allow young diners at Rochester City Schools to add their own flavoring touch.

At Rochester City School District in New York, “flavor stations” consisting of a number of spices and spice blends available in shakers placed at the end of the serving line were piloted over the second half of the 2015-2016 school year in one district high school and one K-8 school. That proved so successful that the district will add the stations in 16 more sites this fall, including all the secondary schools, says Gemma Humphreys, director of food services. Rochester City Schools has a total of 55 buildings, some of them multiple program sites.

“We got a wonderful response from [the pilot],” she reports.

“We look at flavor profiles more than we ever have,” she says. “I’ve been with the school district for 29 years and it’s a far stretch from where it was 29 years ago with regard to how hard we work to entice our kids to eat their meals with us. [For example,] we have a limitation on salt and that is going to continue to get stricter unless something changes, so we figured we would try putting some salt-free flavor enhancers on the lines.”

The idea originated with the observation that kids were already making liberal use of existing flavor enhancers such as hot sauce and Boss sauce at the secondary schools and packets of low-fat ranch dressing available at all sites.

“You see them putting [the ranch dressing] on pizza and just about everything else, and that really is what enticed us to look at flavor stations,” Humphries says.

Humphries worked with spice vendor McCormick to come up with salt-free seasoning alternatives and rotated them through the two pilot sites to gauge response.

“We tried different garlic seasonings, different spice blends that McCormick had available,” Humphries recalls. “They included a Mexican-type seasoning and [various] garlic spice blends. There was a Southwest blend that was pretty popular as well as lemon pepper, garlic powder and crushed red pepper flakes.”

The age of the kids didn’t seem to affect preferences, she notes.

“Amazingly, elementary [and] secondary school kids [all] love spicy food,” she laughs. “We go through red pepper flakes as much as any other seasoning. I guess they’re used to eating spicy at home, so they eat spicy at school as well.”

The spice stations are placed at the end of the serving line just before checkout “so they can shake on whatever they like before they cash out.”

The impact of the flavor stations has been more on satisfaction levels than on participation numbers as the high-poverty district—84 percent of students qualify for free or reduced price meals—already has high participation rates, Humphries says.

The stations made their debut even as the infrastructure of the district’s elementary school foodservice facilities have been undergoing a major upgrade, from bare-bones heat-and-serve kitchens dispensing pre-plated meals produced in the district central kitchen to what Humphries describes as hybrid programs that offer bulk food from the central kitchen on a serving line. All but 10 sites have been renovated so far.

“So instead of pushing a package at them, we’re now actually asking the children what they would like, and then serving it up fresh on their plates,” she says.

The new hybrid kitchens also make sandwiches and prepared salads fresh onsite and seven of the hybrid elementary locations also installed salad bars last year, which add yet more choices as every child can add what they want to their plates from the salad bar.

“We try to offer selections kids can put on their plates that can enhance their meals,” Humphries says.

She intends to extend the salad bar program to the secondary schools this year. “By Christmas the majority of those 11 sites should have salad bars.”