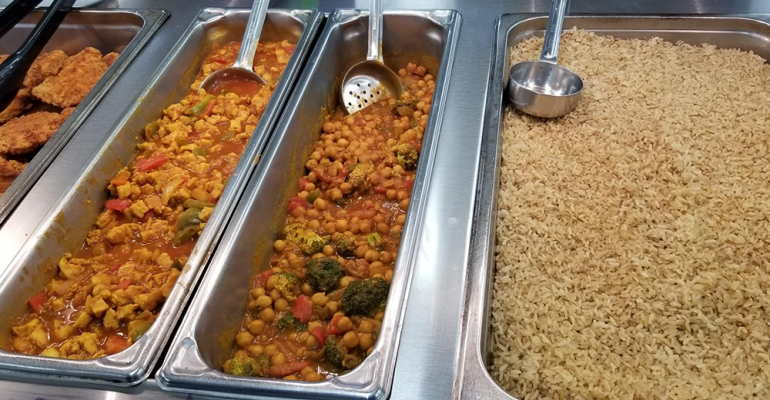 Before Robin Brown became the cafeteria manager at Fort Walton Beach High School, a student at the Florida school gathered signatures and presented a petition to administrators, requesting vegan options in the lunch line.

Meeting this request was Brown’s first assignment—“Make that happen,” the principal said.

She threw herself into the task. So far, she’s created 20 of her own plant-based entrées. Her goal is to create a full 50-meal cycle.

As she develops recipes, Brown asks students for feedback and uses their suggestions to make meals better.

Her first attempt at a black bean burger, for instance, got a warm reception. But it wasn’t perfect. It had too much cilantro, one student told her. And the burgers were falling apart. So she tried other types of beans.

Now she serves vegan bean burgers every Thursday, housemade patties made from white, red, black or refried beans. They’re popular with the kids.

Tuesdays she serves saucy curry entrées served over brown rice that are made with chickpeas, broccoli, potatoes or Northern beans. Fridays, it’s Mexican cuisine, such as enchiladas or a three-bean avocado Mexican layered lasagna. Other meals include stuffed peppers, shepherd’s pie, chili and hummus pita pizzas.

Brown is energized by recipe development. Sometimes, an idea for a new menu item strikes her late at night.  “The more I do successfully, the more I want to do successfully.”

The district’s foodservice contractor, The Nutrition Group, supports Brown’s efforts by working with her so she can order the ingredients she needs. They also developed a vegan menu for the high school using Brown’s recipes.

She places orders as part of the regular ordering cycle, mainly fresh produce and fresh herbs. The company recently approved avocados for her layered lasagna dish.

“That’s a hot-ticket item,” she says.

It’s challenging, Brown says. She’s limited by what she can order. “I really have to wear my creative hat and ask: How many different things can I turn the same ingredient into so it’s not the same thing every single day?”

She relies on her own creativity to come up with fresh combinations. Brown re-purposes items by making leftovers into popular meals: beans become bean burgers and leftover chickpeas become hummus or curry.

Other uses for chickpeas under Brown’s inventive eye include roasting them to use in the salad bar as toppers and rolling them into fillings for the stuffed red bell peppers or the shepherd’s pie. Her thrift helps make the meals cost-effective.

She recently started serving vegan breakfast items, as well. The first time she served her overnight oats, made with apple juice and cinnamon, they disappeared before the popular French toast was gone. She also makes hot oatmeal with peanut butter, which meets the protein requirement. She’s working on a potato dish.

Fort Walton Beach is the only school in the district with a vegan menu. But Brown is part of a group of 49 managers across the district, each one of the school cafeterias in the district. The managers meet monthly to swap ideas. One manager has already called Brown to request recipes. She hopes it will catch on.

On average, the dining staff serves an average of 530 lunches every day. About 25 are vegan meals. Fort Walton Beach’s student population is just shy of 1,800 students.

Vegan diners, both students and staff, respond enthusiastically to Brown’s meals, and to her dedication to the cafeteria experience.

Cyndi Stone, who teaches AP physics, says many staff members are eating and talking about the food, which has piqued the interest of more students.

“I had not eaten in a school cafeteria since 1972, when I was in seventh grade,” says Stone, who has eaten a vegetarian or vegan diet since she was four years old. “Now I eat there every day.”

Sandra Barrette, a Spanish teacher, has had a similar experience. “I’ve never raved about any cafeteria before like I’ve raved for this one,” she says. “It has options for everyone. I am vegan and I never expected to be able to eat at my work.”

Brown credits the students for speaking up.

“The kids in this school have such a camaraderie,” she says. “When these kids see an injustice, they come together. The students here are super empowered to ask for what they want. If they would have never asked for vegan meals, I don’t think it would have dawned on any of us.”