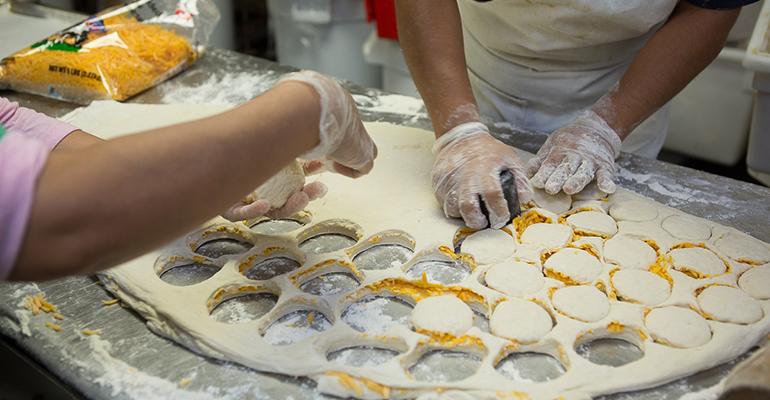 About 10 years ago companies saw an opportunity in the school foodservice arena: They saw the need for a different way to provide meals. Perhaps the best known of these companies is Revolution Food. But it’s far from the only one, as Red Rabbit a New York City-based company proves by serving meal to 20,000 students.

Today Red Rabbit serves New York City children in charter schools and after-school, pre-K and Head Start programs. But the company has evolved a great deal along the way. In the process Rhys Powell, the founder and president, received a crash course in school food, but through it all he insisted on making everything he serves from scratch.

Over a decade ago, when Powell was losing interest in his career in finance, a friend asked him for guidance on helping his 4-year-old daughter eat healthy meals. He threw himself into the project.

“I started exploring the food industry and the school food industry more through the lens of being a consumer than being a participant, but it definitely started to get me excited and interested in it,” says Powell. So that’s where the nexus of the company came from.” Rhys Powell, the owner and founder of Red Rabbit.

Red Rabbit (the name chosen by that 4-year-old) started in 2005 as what Powell calls “a convenience for private school parents.” Those parents logged on to a web portal and registered for individualized, made-from-scratch meals that Powell’s company would deliver. At the time, Powell worked with six schools, but he faced many challenges, including the logistics of actually making and delivering personalized meals and a lack of funds needed to market a direct to consumers business.

Red Rabbit later switched to working directly with about a dozen private schools, and at this point this, the company started to hit its stride. Powell was gaining a more in-depth knowledge of the marketplace and its pain points, he says. It was around then, in 2011, that he saw the discrepancy between public and private school meals.

“We took it upon ourselves to go beyond private schools and start working with that non-private sector and to take on those challenges,” he says. Serendipitously, at this time, Powell was approached by an investor who offered to put $500,000 into the company.

The shift to working with charter schools, pre-Ks, Head Start programs and non-private schools wasn’t easy. (Red Rabbit does not work with any district school in New York City as these are managed by the Department of Education.)

“The biggest part of the transition was taking a meal that we were currently selling for $5.50 and bringing that down to what the non-private schools could afford, which was around $3,” Powell says. “In doing that we didn’t follow the patterns that most other foodservice companies did, which was cut the quality of the food or shift to convenience foods like frozen chicken nuggets and canned vegetables or fruit in syrup and those types of things. Our nutrition philosophy demanded that we use fresh ingredients and cook from scratch and those ingredients definitely cost more than the convenience meals. So the biggest challenge was taking those ingredients and cooking them in a way that kids enjoy but still being able to charge 40 percent less for it and have a sustainable business.”

Powell also had to consider USDA regulations, which was something he didn't have to worry about when working with private schools.

“I have to say that was a bit challenging at first for us," says Powell. "Less so that our food was not nutritious and we were forced to make it nutritious, but more so that our chefs were allowed a freedom and creativity in creating the meals for the kids that the USDA requirements don’t really allow." Red Rabbit meets the USDA requirements by standardized some components of their meals, says Powell.

Today, at Red Rabbit's 1,000-square-foot kitchen in the East Harlem neighborhood of Manhattan, his staff of about 100 cook up quesadillas, chili, tacos, cheddar biscuits and muffins.

One menu item Powell is particularly proud of is his fish cakes. He admits, he was a bit nervous about serving fish cakes to children. He even had a parent call and ask for a substitute for her daughter when the dish first appeared on school menus. But he was vindicated quickly–the next day that same parent called back to let Powell know that her daughter had been stealing fish cakes from the child next to her. She loved them. Red Rabbit’s fish cakes are made by hand using sustainable fish caught off the coast of Massachusetts.

Red Rabbit now serves about 20,000 students, and Powell imagines that in the next few years his company will expand in the regional area into schools to Westchester, Long Island, Connecticut and Philadelphia.

But as Red Rabbit grows, Powell will keep his focus on his mission. In fact, Red Rabbit is a member of B Corp, an organization that certifies for-profit companies who meet high levels of social and environmental performance, accountability and transparency.

“For me starting the business was never purely about making a profit,” says Powell.  “We were a mission-based business from our inception.”

How Houston Independent School District is working with the Houston Food Bank to feed the city’s families during coronavirus
Apr 07, 2020