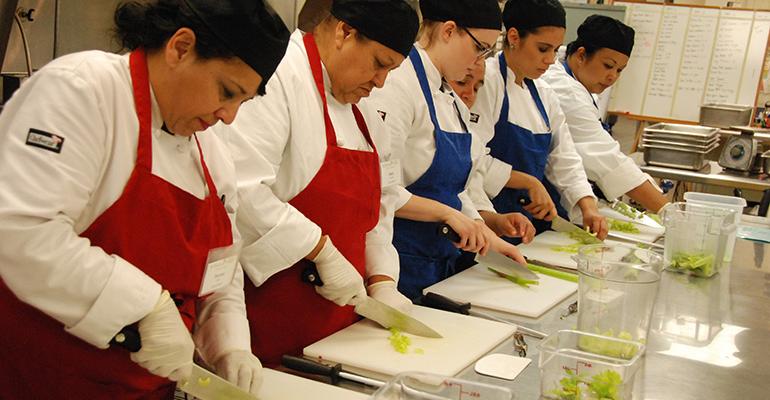 One philanthropic organization gave an entire city a lesson in serving up healthier school food.

Ever wonder what might happen if you taught a school cafeteria how to operate like a great restaurant? For starters, the food would get more creative and more delicious. The staff would work more efficiently, and maybe even feel more confident in the kitchen. Those age-old complaints about school lunch would go down—and participation would go way up.

It might sound completely unrealistic, but one philanthropic organization decided to give it a try. And not just with one cafeteria. Instead, the Santa Barbara, Calif.-based Orfalea Foundation devoted $12 million to overhauling school food for every district in its city. Here’s how its eight-year School Food Initiative gave some 50,000 students access to healthier meal choices—and how other schools can follow their lead.

From cafeteria to restaurant kitchen
When the Orfalea Foundation was founded in 2007, its members sought to bring a business-minded approach to raising community standards in a variety of areas, including childhood education and disaster preparedness. In the case of improving school food, that meant starting by teaching cafeteria workers to think like restaurant-minded chefs.

But cooking know-how was just the beginning. Staffers also learned how to think entrepreneurially and pay closer attention to food and labor costs in an effort to improve a cafeteria’s bottom line. School food programs could save money and labor, for instance, by scooping food directly onto students’ trays instead of pre-packaging food into individual plastic cups, or learning how to project accurate recipe volumes. And they could increase their revenue by developing new programs like summer feeding programs, after-school snacks or catering for monthly birthday celebrations.

Remaking the menus
With their new skills freshly in place, cafeteria staffers were ready to start making healthy changes to their menus. Previously, most of the schools’ offerings consisted of expensive processed products like tater tots, chicken nuggets, fruit cocktail and chocolate milk. “They were running in the red,” Dechadenedes says. “So not only could they not stay financially viable, they were serving non-nutritious foods.”

Orfalea’s chef instructors steered kitchen staffers toward making more items from scratch. Instead of prepackaged chicken fingers, staffers began roasting whole-muscle meats. They started making pizza in house instead of heating up frozen pies, and swapped bottled salad dressings for ones made from scratch. And when schools did buy premade items like sandwich bread, they sought out cleaner options like ones made without high fructose corn syrup.

The changes didn’t stop there. Many schools also began buying more from local farmers, which allowed them to emphasize seasonality on their menus. And the cost, according to Dechadenedes, was manageable. “We really didn’t run into anybody that had financial problems doing this. There was so much waste going on, and once the directors were able to identify it, the food didn’t really cost them that much more,” she says.

Reaping the rewards
Perhaps unsurprisingly, the improvements drove up school meal participation—especially in districts where the majority of the students paid for their meals. “We had a lot more adult participation too, which is a good indicator that the food quality is pretty good,” Dechadenedes says.

But the rise in sales wasn’t the only thing that proved the School Food Initiative had been a success. As the program wound down, the Orfalea Foundation surveyed nearly 50 cafeteria managers and analyzed before and after data for individual schools as well as entire districts. The in-depth evaluation confirmed what many at the foundation and at Santa Barbara schools already knew: Cafeteria personnel were better trained, students were eating more nutritious foods and schools were invested in sustaining their healthy eating efforts.

The continued commitment to healthier meals is especially important, since now, the training wheels are off. Designed at the outset to be temporary, the Orfalea Foundation closed its doors at the end of 2015. But teaching cafeteria staffers core culinary and management skills ensured they could continue carrying out principles of the School Food Initiative on their own. “The purpose was to create something that could be sustained after we withdrew our support,” Dechadenedes says. “By leaving them with the right tools, they could continue enhancing their work.”