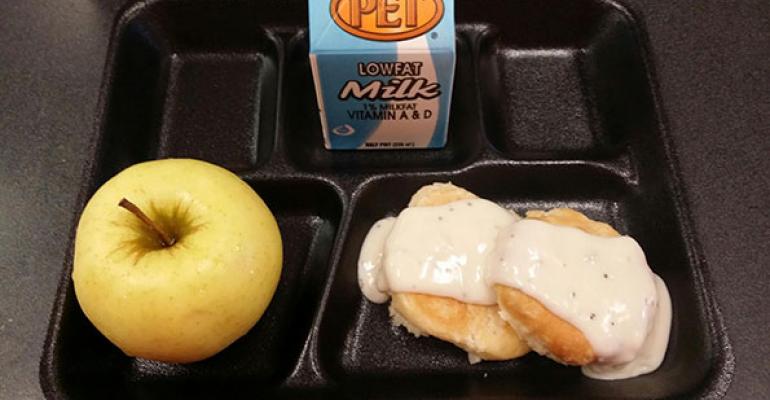 <p>After receiving the waiver, Haywood was able to add back its popular biscuits to the breakfast menu. Participation increased as a result.</p>
News & Trends>K-12 Schools

No matter what recipe they’d try, the buttermilk biscuits at Haywood County Schools, in Waynesville, N.C., were never as tasty—or as saleable—when they were made with whole grains.

But, because of the Healthy, Hunger-Free Kids Act of 2010 that requires schools to serve 100 percent whole-grain breads, Haywood County Schools (HCS) was stuck. And biscuit sales were plummeting.

“The implementation of the restrictive federal food regulations has been devastating for our students and the school foodservice program,” says Alison Francis, director of school nutrition, who has been with HCS for six years. “While many students adjusted to whole-grain buns, others simply refused to eat whole-grain biscuits, rice and other previously popular foods.”

HCS decided to take matters into its own hands by being the first district in the state to apply for a waiver that would allow it to serve 50 percent whole-grain items rather than 100 percent.

“Some whole-grain items will remain on the menu, but others, like biscuits, can be replaced,” Francis says.

In order for the state department to grant the grain waiver, HCS had to prove that the foodservice program was suffering a hardship as a result of the legislation.

“Over the past four years, we’ve seen participation drop 4 percent,” says Francis, who adds that while the legislation is well intended and designed to improve the nutrition of meals at school, it isn’t working all that well for certain aspects of HCS’s program, which feeds 7,400 students across 16 schools with 54 percent qualifying for free and reduced meals. “Out of all the things we serve, the biggest complaints over the past few years have been the whole-grain pasta and the whole-grain biscuits.”

Once Francis filled out all the appropriate documentation for the whole-grain bread waiver, she sent it to the state department, which held the power to approve or deny it.

Much to her surprise, she received word the following day. The waiver had been approved. It will last through the rest of this school year and all of next school year. (Eventually the district is hoping for new guidelines to follow.)

“We want our kids to eat with us,” Francis says. “What good are all these healthy meals and rules if no one is eating with us?”

To celebrate their return, the district offered free biscuits and gravy to students and staff on April 1. It was a huge success and participation skyrocketed.

“Because it was on April Fools’ Day, we decided to have fun with the promotion. We called it, ‘No foolin’! Buttermilk Biscuits are Back!’ and we’ve since seen breakfast participation increase by 15 percent over the past month as a result,” Francis says.

This recent waiver is limited to whole-grain breads, but HCS’s issues with the school nutrition requirements go beyond biscuits. Last year, as sales of macaroni and cheese plummeted, the district was able to obtain a pasta waiver that allowed it to use white pasta from time to time. Sales returned and satisfaction soared.

What’s more interesting, according to Francis, is the number of districts looking to follow HCS’s lead in obtaining waivers for certain dishes that were once hugely popular with students.

“I attended a regional school nutrition meeting and when asked how many people applied for the grain waiver, almost all the hands in the room went up,” she says. “I don’t know if we’ll see the legislation change completely with reauthorization, but the School Nutrition Association is pushing for some changes, including making the whole-grain waiver permanent.”

The association also wants school systems to be able to decide whether to require students to take a fruit or vegetable and to avoid additional reductions in the allowable sodium levels.