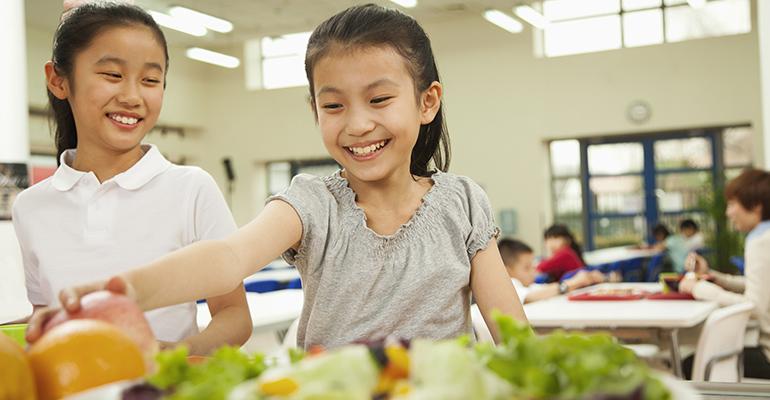 Among other findings, milk and veggies are the reimbursable meal components most likely to be tossed in the trash, and the average school food authority operates at a small deficit.

The nutritional quality of National School Lunch program (NSLP) lunches and School Breakfast Program (SPB) breakfasts increased “significantly” between the 2009-10 and 2014-15 school years, reflecting the initial impact of the Healthy Hunger-Free Kids Act (HHFKA) of 2010, which began going into effect in the 2012-13 school year. Those were some of the conclusions of a recently released report from the Food & Nutrition Service of the USDA that presented findings from the School Nutrition and Meal Cost Study (SNMCS), the first comprehensive, nationally representative study of the school meal programs since HHFKA was implemented.

Related: 5 things: Could Child Nutrition Reauthorization be in the works?

In the area of plate waste during NSLP lunches, it was highest for vegetables with an average of 31% being wasted, followed by milk (29%), fruits and 100% fruit juices (26%), and separate or side grains/breads (23%). Mean levels of waste were lower for desserts and other menu items (20%) and lowest for entrées (16%) and meats/meat alternates (14%).

For each type of food, the mean proportion wasted was higher in elementary schools than in middle or high schools. The study authors suggest one reason for this may be the offer versus serve (OVS) option, which is mandatory for high schools but optional at lower level schools, though it did note that 81% of all elementary and middle schools used OVS at lunch, and multivariate analyses found that, at least among elementary schools, use of OVS was associated with significantly lower levels of plate waste.

In the cost area, the study found that in the 2014–15 school year, for the average school food authority (SFA) the mean reported cost to produce a reimbursable lunch was $3.81, compared to the average federal free lunch subsidy of $3.32—an approximately 15% gap—while the cost-to-subsidy shortfall on reimbursable breakfasts was even larger: $2.72 to produce compared to an average subsidy of $1.88, or about a 45% difference.

USDA subsidies, including cash reimbursements and USDA foods, accounted for an average of 63% of total SFA revenues, with student payments for reimbursable meals representing about 20% and la carte and other non-reimbursable food sales accounted for 11%. Overall, for the average SFA, total revenues covered 97% of total reported costs, indicating that the average SFA operated at a small deficit.