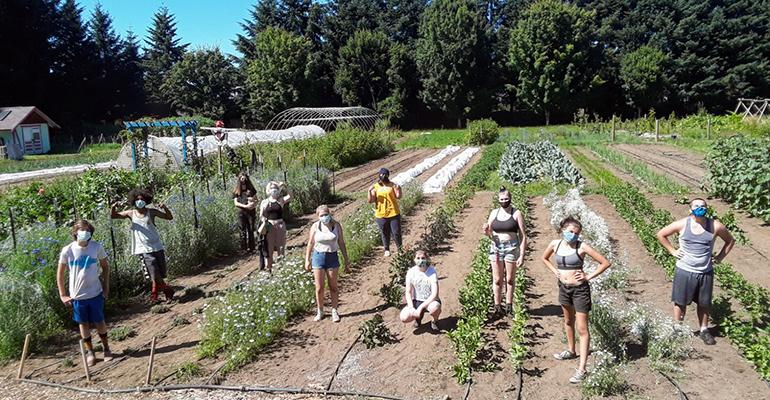 This fall, about 70 high school students in the Olympia School District in Washington State will escape newly repopulated classrooms and hallways to spend half of each school day in a block class at a district-owned 15-acre farm.  Their mission: to grow vegetables for the district’s child nutrition program while they earn credits toward graduation.

The Freedom Farmers program is in its ninth year says Blue Peetz, its leader and founding teacher.

Students who opt in earn civics, agricultural science and elective credits. But they also return something tangible to the district: 15,000 pounds of vegetables, about five percent of produce the district uses yearly.

The vegetables are used in school meals throughout the year and, to a lesser degree, in free summer camp lunches and weekly produce bags for families picking up weekend meals.

Students coordinate with the district to plan their crops. Then they plant, tend and harvest every vegetable themselves. They also process the vegetables they grow so district staff can fetch them from the freezers.

During the harvest, Peetz takes groups of students to the central kitchen at Olympia High School where they blanch and freeze thousands of pounds of tomatoes, carrots, squash, peppers, onions and other vegetables. Then they vacuum seal them in two- or three-pound bags using equipment purchased just for this purpose.

As the students process a thousand pounds of tomatoes or prepare huge batches of pesto, they start to see what it’s like to feed large groups of people. “We grow a lot of food,” Peetz says. “They definitely see the volume, how many kids this is feeding.”

He also observes students making a direct connection between their work and the issue of food waste. “If we are not in there, being the sous chefs, this food’s actually not going to be used.” 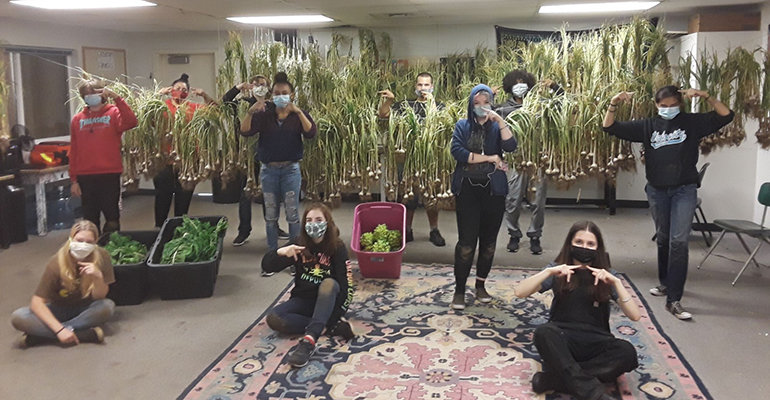 Every year, student farmers in the Olympia School District grow 15,000 pounds of vegetables for school meals, about five percent of the district’s yearly produce.

Beyond farming, the focus of the program is to encourage students to interact with the life cycle of food by exploring where it comes from, where it goes and how it functions in a community. In addition to food waste, they learn about topics such as food access, hunger, and responsible growing techniques.

The influx of produce helps the child nutrition program meet the USDA standards for fresh produce offerings, giving them more options for the daily fruit and vegetable bars in every school: each is stocked with 10 to 12 different types of fresh produce.

Having a dedicated group of student farmers is helpful, but it’s also relationally beneficial. Child nutrition supervisor Paul Flock notes that having students in the kitchen is a rich opportunity for staff and students to work together.

The staff “interacts more with the kids,” he says. “They’re talking with the kids about the food and what they grew. And the kids are proud of it. It’s an opportunity to see the students in a different light.”

Early in the harvest, the staff uses as much fresh produce as possible, serving up things like cantaloupe and honeydew melons, baked potatoes and steamed broccoli.

Throughout the year, they use frozen produce from the Freedom Farmers in a variety of meals. Heirloom tomatoes end up in spaghetti sauce and chili. Zucchini goes into breakfast muffins. Potatoes, carrots, tomatoes, and green beans become homemade vegetable soup. 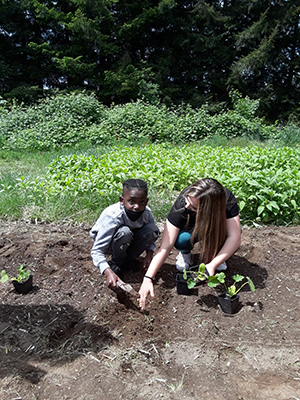 The central kitchen makes about 25 percent of its meals from scratch using commodity ingredients, products from their distributor and local goods. The district purchases pizza shells from a local bakery, blueberries from a local farm and berry preserves and syrups from a regional family business. In the past, they also purchased produce from the agricultural program at a local college.

The district employs 45 child nutrition workers; 10 of them produce food in the central kitchen. For a student body of 9,700 students, they serve 3,500 lunches and 1,000 breakfasts daily.

Almost 30 percent of students qualify for free and reduced school meals, a fact that isn’t lost on the student farmers.

Acknowledging an issue like hunger directly, Peetz says, gives students perspective and motivation. “I think any time you give students an opportunity to work on a relevant issue [like this], that gives them purpose, they really do see what’s wrong in the world and they want to help.” His suggestion: “Involve students in your food work.”

Peetz believes districts can do so using a similar model. “It’s an easy marriage. If a district has surplus land and a cafeteria that feeds kids, they can utilize that land as a learning experience for students and feed their own schools.”