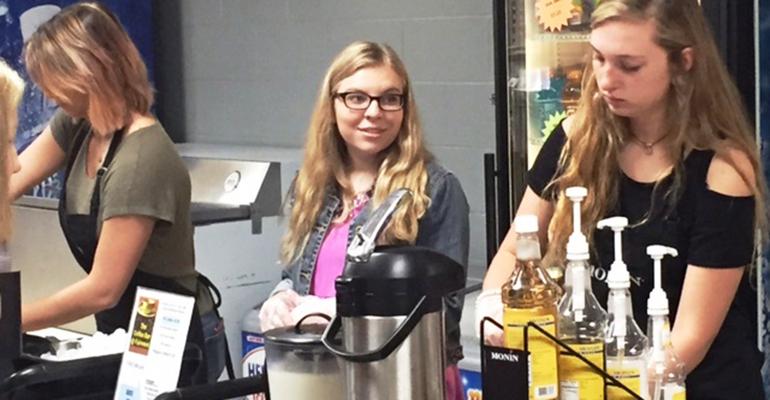 First-ever collaboration between a marketing class and nutrition services results in a cool new coffee corner.

High school students in a marketing class, together with the school nutrition department, have perked up the cafeteria at Kettering Fairmont High School in Kettering, Ohio, with a new coffee program.

Louise Easterly, food and nutrition supervisor, had been thinking about a coffee program for a while, but it was a meeting with students that convinced her to move ahead with it.

“The kids came and asked us if we objected to them installing their own coffee bar,” Easterly says, adding that the staff gently explained the reasons and regulations on why that wouldn’t be quite feasible.

“That’s the beauty of kids today…they think so outside the box with what-if scenarios,” she says. “But then my cafeteria manager said, ‘You know, Louise, the kids are probably onto something.’”

So nutrition services and the students began working together on a new coffee cart in the cafeteria that debuted two weeks ago.

“I’d been considering this, and when they spoke up, I saw it was a wanted thing; that was the push I needed,” Easterly says.

Students work at the cart, serving iced lattes with the options of three flavored, sugar-free syrups (chocolate, caramel and vanilla). Regular hot coffee is available too, but the iced lattes are by far the most popular. The coffees comply with Smart Snack regulations.

“Breakfast is really important to us,” Easterly says, explaining that she wants the coffee program to enhance school breakfast, not detract from it. Coffee, served in 12-ounce cups as an a la carte item, is $2 on its own, $1.25 with a breakfast item.

“I don’t want them getting the message of having just coffee for breakfast,” she says.

“If there’s one complaint it’s that the cups aren’t big enough,” Easterly adds, describing some students’ preference for the giant 16- or 24-ounce lattes from competing coffee shops around town.

Students working at the coffee station cannot be paid by the school, so the young baristas are rewarded with donations to the marketing class—for an upcoming field trip to Chicago, for example. Also the marketing class requires outside work hours, so students are thrilled to be able to do that on campus, Easterly adds.

Right now, the class and the nutrition department are working together on marketing materials: a logo, a color scheme and signage. Easterly was recently at an airport and got inspiration for a name.

“I saw a concept that was called ‘Corner’ something, and since we have the cart in a corner, I thought we could call it the Corner Café,” she says.

Plans include continued collaboration with students and possibly a new location and cart.

“Every now and then, we see these items that catch kids’ interest,” says Easterly, who has been at the district since 1999 and prefers her own coffee no-frills. “This is one that’s really caught on.”