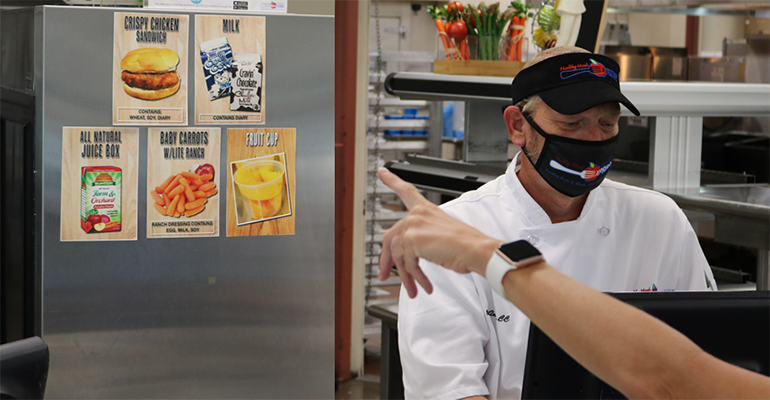 Students point to their preferred meal choices, and staff pull them together to go.
News & Trends>K-12 Schools

New to the job, Shani Hall had to turn a big ship in a hurry.

When she took on her new role as general manager of school nutrition for the Hillsborough (Fla.) County Public Schools in January 2020, Shani Hall had no idea that would be facing a trial by fire. Just two months later, the county’s massive 235-school system would shut down because of the coronavirus pandemic.

Joining the system after a stint as a training coordinator for the Georgia state education department and earlier experience handling foodservice for 20 elementary schools in the Atlanta area, Hall was ready to lead the charge. But “no years of experience could prepare someone for what happened,” she admits.

The district quickly adopted a curbside grab-and-go program that lasted until the fall, when schools reopened.

At first, students were picking up breakfast and lunch daily, then twice a week. Eventually, Hall says, a weekly schedule turned out to be the most practical way to get food to students, since transportation was an issue for many families. Eventually, idled school bus drivers were drafted to deliver meals to sites across the county for those unable to get to the schools at all. 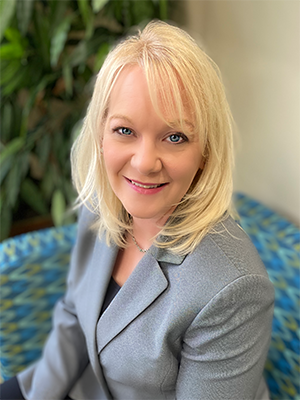 Photo: Shani Hall took over as G.M. just before the pandemic shut schools down.

Another challenge, one common to many school systems, was sourcing the right foods. Finding enough bread to send home in the weekly food packs was tricky, as was sourcing shelf-stable items. One bright spot: Since many restaurants were closed, local farms no longer had buyers for their products, so schools had a crack at them. “We were getting calls from produce centers asking, ‘We have a truckload of cucumbers—can you use them?’” Hall says. Her team jumped on the opportunity to include whole fruits and vegetables with the meal deliveries.

When the schools reopened in August, some students opted for virtual learning, so the district has been operating a hybrid feeding model. At school, students choose from a limited menu of items that the staff packages, then scatter to eat meals either in the cafeteria, classroom or outdoors. The menu is limited in part by continued supply difficulties.

“Our vendor does a lot of substitutions because they are just not getting the supplies from their manufacturers,” Hall says.

Students who opted for remote learning can still pick up meals at the school facilities and additional locations in the county. Hall says the district has partnered with a Meals on Wheels division that specializes in delivering food to kids’ homes; the service transports the schools’ weekly breakfast/lunch package along with its normal delivery of dinner. 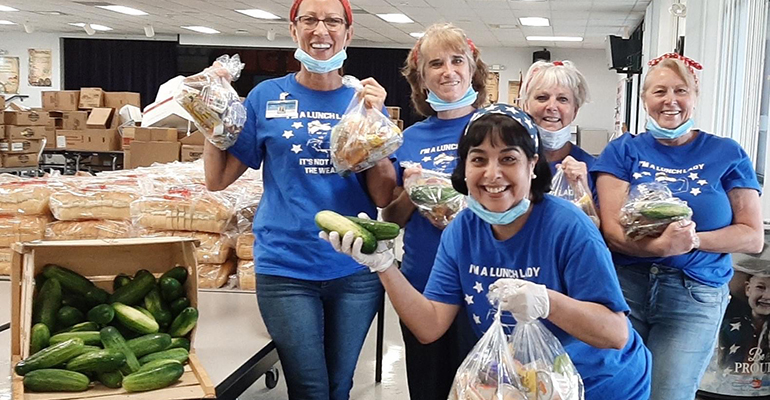 With many restaurants closed, local produce was more readily available for school use.

But some families have been left behind, a gap Hall is working to shrink. “We continue to address the barriers for kids who can’t get our meals,” Hall says. Feeding students is the primary goal, but lower participation, and some higher costs, have also played havoc with the budget. The department has cut out marketing and non-essential overtime, reduced labor through attrition, sought out grant funding (which paid for the bus drivers to distribute meals) and pursued methods to provide more meals. One solution was to provide food during holiday breaks, something that many families took advantage of last December.

When some semblance of normal resumes, Hall does dream about implementing some ideas. 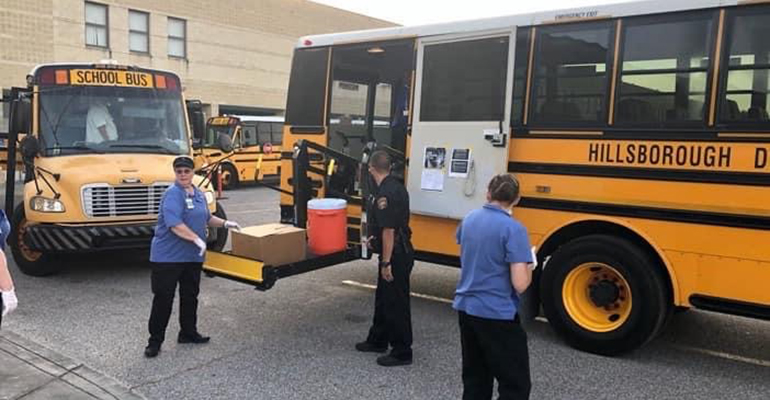 One is establishing a school foodservice career path for culinary students, both internal students and those studying at local career training centers. “We know there are a lot of kids in culinary programs that we lose to restaurants,” she says. She wants them to understand that school nutrition offers plenty of room for advancement and view it as a viable alternative.

A second, more ambitious goal is to establish Hillsborough County schools as a national model for what school nutrition services can be. Pre-pandemic, the district was already starting to innovate, with a district chef leading the charge and an emphasis on culinary skills. Managers at the school level were encouraged to enroll in a American Culinary Federation to develop their culinary abilities. Before the pandemic, the district underwrote the cost of that continuing education, but the times and the budget don’t allow for that right now. Practical considerations—the need to package meals, supply glitches—hamper creativity too.

“I’m hoping we can get back to a place (post-COVID) where we can do cool culinary stuff,” Hall says.

Another casualty of COVID has been The Silo, a café run by the department that serves the school district staff and nearby businesses. When telecommuting grew more common and schools needed The Silo staff to pitch in on school meal production, the restaurant closed last March. Hall says she hopes to reopen the café when people return to offices.