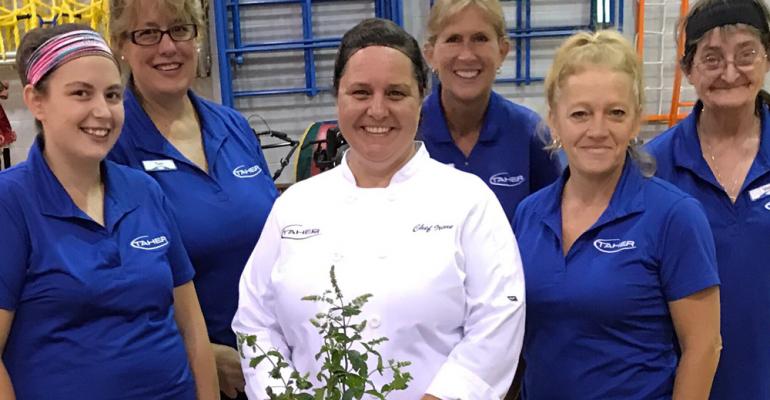 The vitality of the world’s Blue Zones—places where people live longer, healthier lives—is within reach at a school district in Wisconsin, where Chef Irene Pawlisch is incorporating healthy eating wisdom into school and catering menus.

While nutrition trends come and go, the proof is in the pudding with Blue Zones, places in the world where statistics show that people live longer and have less disease. Lately, dietitians and chefs have been looking to the cuisines of Ikaria, Greece; the Barbagia region of Sardinia; Nicoya Peninsula, Costa Rica; Loma Linda, Calif.; and Okinawa, Japan, for guidance on how to eat and live for longevity, health and happiness.

“Residents of the Blue Zones live in very different parts of the world,” according to the Blue Zone Project’s website. “Yet they have nine commonalities that lead to longer, healthier, happier lives.”

So while the cuisine is quite different from Sardinia to Costa Rica, for example, researchers have found some common threads, aka “the Power 9,” including: living in an environment where movement comes naturally, having a sense of purpose (called “Ikigai” in Japan), grabbing down time (naps, prayer, happy hour) every day, eating smaller meals toward the end of the day, more plant-based food, drinking moderate amounts of wine each day (and drinking with friends), having a sense of belonging and having a supportive social circle.

“My therapists suggested I read about Blue Zones after finding out I was a school chef for Taher,” she recalls.

Intrigued by the findings, Pawlisch has set out to incorporate as much of the Blue Zone wisdom as possible for students and staff at the school accounts she works with, most recently at Beaver Dam Unified School District (BDUSD) in Beaver Dam, Wis.

Pawlisch teamed up with Keith Hill of the Blue Zones of Dodge County project and learned how to take a recipe and turn it into a Blue Zone-approved recipe. One of the first tests was a back-to-school catered picnic for staff at BDUSD, which featured menu items from each of the Blue Zones. The event turned out a hit.

For regular staff meals during the school year, a roasted veggie wrap with a goat cheese spread and veggie salad have also been Blue Zone-inspired winners.

And plant-based ethos of Blue Zone food aligns perfectly with “the growing demand for more vegetarian options on the school menu,” Pawlisch says. “This school year, we are blending faro, barley and quinoa into the USDA brown rice to make grain bowls where the students choose the toppings,” she says. “And we’re also developing some ‘sneaky’ recipes.”

Those stealth health recipes include replacing a very popular flavored mayonnaise with spreads made from beans, cheese and sour cream.

Pawlisch has also focused on the use of fresh herbs in school meals (a potato salad with tarragon, dill and basil grown by Future Farmers of America classes). This tied in perfectly with the ongoing Wisconsin Wednesdays project, which features local food, including a variety of potatoes all grown in the state.

Kid and grownup favorite hummus has been a way to add more beans into the mix.

“We make our own hummus in house from a variety of beans and kick up the flavor with roasted garlic, fresh herbs, lemon or lime juice,” she says. “Our hummus was a big hit at the back-to-school picnic for staff, and we did a story time activity at the local library this summer featuring a lemon-garlic-basil hummus with much success.”

Still, introducing new food items to students is “a gradual process,” Pawlisch says, so free samples of new healthy menu items every month at the elementary schools in the district is key.

Hummus has found a home on fresh vegetable bars in the district, and Pawlisch can’t emphasize enough what a difference she’s found with making it in house.

As for creating more Blue Zone-inspired recipes for school menus, Pawslisch is looking forward to the process.

“My personal lifestyle falls very much in line with the Power 9 being promoted,” she says. “It’s easy for me to adapt recipes because I naturally gravitate towards garden-fresh and local in my everyday life.”