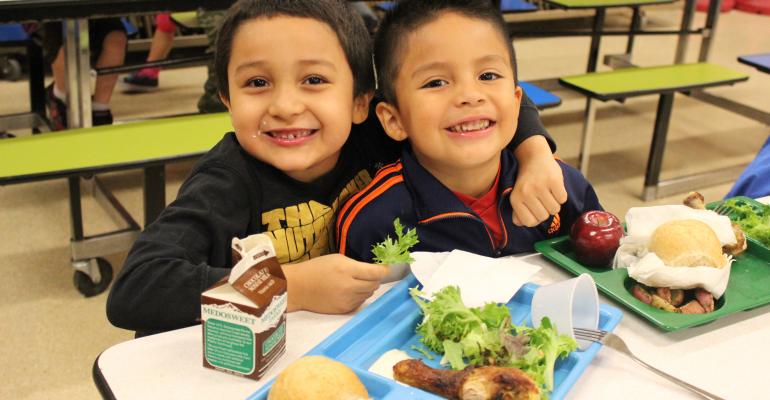 “From my perspective, this story really starts with community, with the local food movement, with the desire for local food,” says Jessica Sankey, the district’s director of wellness. “Everyone thought it was really important to look at the quality of food, the healthfulness of food, and the amount of food that’s processed” in the schools.

The goal of the advisory group was to compress a wide array of ideas into a working document that could guide the district into a new model of foodservice delivery. “Food matters a lot to all of us, but we all have really different values,” she says. “So we wanted to try to find something that makes it easier to talk about, avoids shaming anybody and helps promote health.”

The result was the Bellingham Good Food Promise, a simply designed two-page document that outlines the district’s key food values.

The advisory group implemented these values by creating a robust food education campaign that includes a Harvest of the Month program through a partnership with a local foundation. They also partnered with a school garden nonprofit and brought in a limited number of products from local farms, such as cubed squash. But the core decision of the group was to lobby for a central kitchen to help the district replace the longtime heat-and-serve system with a scratch-made model that’s more sustainable and transparent. For many years, prepackaged food has been heated in three high school kitchens and shipped hot to elementary and middle schools.

Like many districts, Bellingham’s school kitchens have “a complete lack of infrastructure” says Patrick Durgan, executive chef and director of foodservices. “Here’s a great opportunity to create an easier path by creating a kitchen that can handle raw projects on site.”

The central kitchen, funded by a facilities bond measure that passed in 2012, will allow the district to make its own meals using whole ingredients sourced through USDA channels and, eventually, from local farms. The kitchen, which was designed by a team that included two district kitchen workers, is currently under construction. It’s slated to open in 2019.

To facilitate the changes, the district hired three new staff members: Sankey, Durgan and a nutritionist. Sankey has a background in public health, and Durgan in university food settings.

In the lead-up to the central kitchen launch, the new staff is making incremental changes. This year, they’re designing a menu around whole-muscle products made from commodity items, such as shredded chicken and pulled pork. Though these products are precooked now, Durgan says they’ll work with raw proteins in the future.

Shredded products allow them more control over portioning at service sites. And since they taste similar to traditional products, they still appeal to students. The barbecue chicken sandwich is now made with shredded chicken rather than chicken breast. Pulled pork appears in sandwiches, plated alone, or as carnitas served alongside beans and rice.

“The plates aren’t going to look much different,” he explains. “You've got to start transforming little by little so you don't have a huge menu shock. We’re trying to take as much of the processed element out of the food as we can and then we’ll continue to transform and evolve as we go.”

Fresh produce, by contrast, is highly visible. This year, they installed salad bars in every school lunchroom. They’re stocked daily with a rotating variety of foods that appeal to both students and staff, such as chopped romaine, spinach, legumes, whole fruits, canned fruits, cherry tomatoes and peppers.

The district eliminated chocolate milk two years ago, and this year they found another way to reduce sugar intake at school. Using extra funds from the USDA Department of Defense Fresh Fruit and Vegetable Program, the district purchased 5,000 pounds of berries and made them into a low-sugar syrup to replace syrup packets that were full of processed sweeteners (and a drain on the custodial staff). They expect the stash to last through the full school year.

Durgan is happy with the progress so far and says they’re focused on “making the right decisions, and not worrying about doing it as fast as we possibly can” so they can build a long-lasting, successful program.