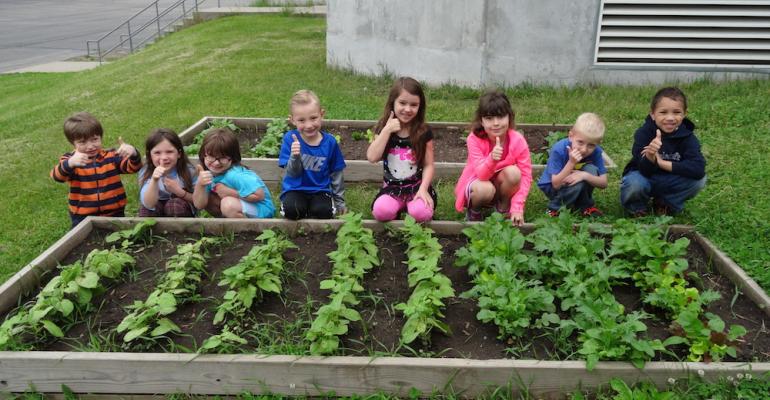 Roosevelt Elementary School in the Janesville School District in Wisconsin, like a growing number of schools around the country, maintains a school garden. However, unlike most schools where either the older students tend the garden or children from across multiple grade levels pitch in, at Roosevelt the garden has become the sole province of the youngest students, the kindergarteners (Roosevelt is a K-5 school).

Getting parents and community members to help with the garden always was a little bit of a challenge,” explains Jim Degan, SNS, manager of school nutrition for the district. “So the last two years the kindergarten teachers have taken it on as a project. They got volunteers to rototill the garden and then the children have come in and planted crops, watered them and weeded the garden. Then as the leaf lettuce, spinach and radishes have grown, they have harvested it. We then got them involved in using spinners to wash the crops—we triple-wash the spinach and leaf lettuce—and then they provide it to the cafeteria and we serve it to all the kids [in salads].”

Why the kindergarteners? “It’s all about time in schools,” Degan says. “It’s always been difficult to fit it into the curriculum” for the older grades, but he says the kindergarteners not only had a little more time in the school day for the garden but also “the teachers were committed to using it and that to me is a huge part.”

All three kindergarten classes at the school, encompassing 50 to 60 children, participate in the gardening and crop processing activities.

Degan says quick-growing crops like leaf lettuce and spinach are used because of Wisconsin’s short growing season. “They started planting some things in April and they’ve already had the spinach/lettuce mix a couple times this year [mid June], and they’ll do it again in September and October.”

It’s not a huge crop as the garden plot is fairly small. “What they harvest typically is gone in a day or two,” Degan adds.

The idea behind the garden, he explains, is to teach children where their food comes from, but it has also had an effect on participation and menu choice. Like many districts, Janesville has been trying to promote the consumption of more fresh fruits and vegetables in accordance with the Healthy, Hunger-Free Kids Act, but it was a tough go at times.

“When I first did leaf spinach and spinach salads, we were lucky to get 10 percent of the kids to try it,” Degan says. “The wonderful thing about this is that it is product they had a hand in growing and over 50 percent of the students take it and eat it and love it! So you can see the buy-in that takes place with the kids.”

Degan says he is now working with other schools in the district to start more gardens and try to get the same kind of results.

“Starting them at a young age, well, what better time?” he notes. “They’re impressionable, they learn that things taste better that they grow themselves. So it’s a real win-win for all of us.”