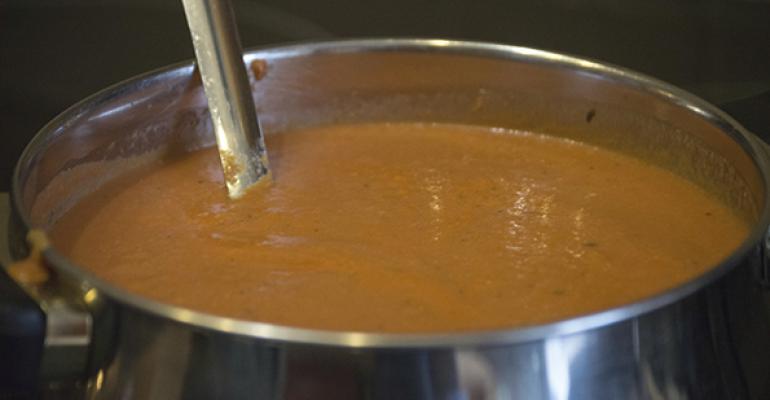 Learning on the Line

Students in the Ferguson-Florissant School District will enjoy two different dishes prepared by a select group of their peers as part of a self-sustaining farm-to-fork program.

Later this month, 11,500 students in the Ferguson-Florissant School District, in Missouri, will enjoy a rich tomato sauce, prepared with locally grown tomatoes that have been seasoned with herbs then thickened and sweetened with locally grown sweet potatoes. It will be served on pasta as part of the district’s universal free lunch program.

While these dishes sound delicious and simple, there’s more to them than meets the eye.

Both the marinara sauce and the sweet potatoes were prepared by a small group of Ferguson-Florissant students as part of an eight-week pilot program that helped the district connect with local farmers while giving students valuable experience working in a commercial kitchen.

“The whole thing started about a year ago,” says Kelly Bristow, a registered dietician with Aramark, the district’s foodservice provider, which has played a pivotal role in the project. “I was brainstorming with our Foodservice Director, Scott Williams, about how we could bring more local produce into our program and still maintain the quality and safety we require.”

This led Bristow back to her nearby alma mater, St. Louis University (SLU). There, she reconnected with Dr. Millie Mattfeldt-Beman, Ph.D., R.D., who is the chair and professor of the department of nutrition and dietetics.

“Dr. Millie Mattfeldt-Beman is focused on farm-to-table programs,” Bristow says. “Once she learned about what we were looking to do, she approached us with a grant from the Missouri Foundation for Health (MFH) called the Healthy Eating with Local Produce Initiative.”

SLU began the initiative five years ago with an $180,000 grant from MFH. It was previously granted to Maplewood-Richmond Heights School District as part of a similar collaboration.

The grant provided two of the district’s high schools—McCluer North and McCluer South-Berkeley—with local produce as well as kitchen equipment, ranging from smallwares to a cryovac machine (which the district will keep at the end of the program). It also funded the training, hiring and paying of eight students who were tasked with transforming the raw ingredients into finished products that were sold back to Aramark to be used on upcoming menus.

As it stands, the program is completely self-sustaining.

“Once we got final clearance from MFH, we brought on two family and consumer sciences teachers, Rita Benny and Beth Derhake, to oversee the program,” Bristow says. “Both teachers were instrumental in helping us to identify, interview, hire and train the eight participating students.”

At McCluer North, five students worked two days a week from 2:30 p.m. to 6:30p.m., cooking, milling and packaging the marinara sauce, which was then be shipped back to the district’s warehouse freezer before being distributed to all the schools later this month.

At McCluer South-Berkeley, three students met once a week to wash, slice and cryovac sweet potatoes, which are also being stored in the district’s central warehouse.

“We want to reach as many students as possible, so we focused on making these two products each week,” says Bristow, who adds that the on-the-job training for the eight participating students has proven priceless. “I think they started out looking at it as a $10-an-hour part-time job. But by the end of the eight weeks, they were passionate about what they were making and proud of how it tasted.”

Even though the pilot is over, the district plans to continue the program, bringing in more local produce to the table while hiring and training additional students.

“It’s a win for all of us,” Bristow says. “District students will enjoy tasty and healthier lunches. Local farmers will have a new customer who wants to showcase their produce. And our high school students will learn the satisfaction of a job well done."