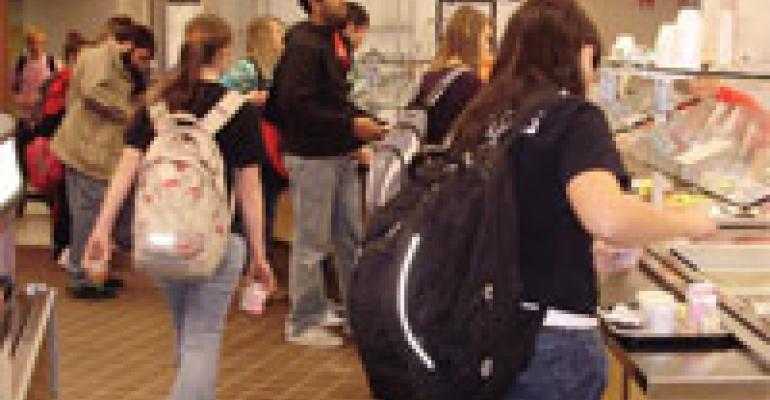 Linn Mar's growing district school system has one high school, which now numbers some 1,800 students. Combine the discouraging lunchroom congestion that kind of enrollment number implies with the school tradition that juniors and seniors are allowed open campus privileges during lunch and you get…well, very few juniors and seniors eating lunch in the cafeteria.

And that was exactly the situation three years ago, when only about a third of the high school enrollment bought reimbursable full-meal lunches on an average day.

Today, that number is nearly 60 percent, thanks to a significant change in the dining arrangements that has lured more upperclassment to remain on campus for the midday meal, and also encouraged more underclassmen to brave the lunch lines.

While she was unable to rein in the open campus policy for upperclassmen, Linn Mar Nutrition Services Director Susan Knight did the next best thing. She gave the upperclassmen their own separate cafeteria.

Called the Food Court, it is smaller, quieter (i.e, none of those annoying freshmen and sophomores allowed…), more modern and more upscale than the general cafeteria.

The Food Court not only encourages more upperclassmen to stay on campus but relieves the congestion at the main cafeteria, which in turn prompts more underclassmen who had been put off by the crowding to buy lunch there.

The space used for the Food Court was originally an auxilliary basketball gym located above the existing cafeteria. In recent years, it had been used mainly for storage.

In a major construction project that was part of a broader renovation and expansion of the high school building, this space was converted into a dining area where juniors and seniors are afforded exclusive access.

Retaining the old gym's wooden floor and basketball court markings (hence the name), the space affords upperclassmen a sense of privilege and exclusivity away from the bustle of the eatery below. It has its own serving areas that menu variations on some of the fare being served downstairs in the main cafeteria.

Knight says the difference between upstairs and downstairs lies mainly in increased choices and some menu upscaling.

“For example, while downstairs we may have a sandwich bar, upstairs we try to dress it up a bit by offering a soup and sandwich (or wrap or salad) combo, so they have more choices in creating their own meals. That is a very popular offering. Another big success is the pasta bar, which we offer once a week when we're serving pasta downstairs. The difference is that upstairs students can choose different types of pasta and sauce combinations.”

Other menu exclusives upstairs include a burger bar that comes with baked fries not available downstairs (the district does not deep fry anything anymore).

The prices and portion sizes are the same upstairs and down, in accordance with USDA guidelines for reimbursable meals. Both serveries offer branded choices from Subway or Pizza Hut one day a week.

The Food Court does have fewer choices overall. The downstairs cafeteria offers at least four different meal choices daily, but then, upperclassmen do have the option of getting something down there and then coming upstairs to eat.

The menu runs on a six-week cycle, with some favorites served more often. Favorites include tacos and Asian entrees like chicken teriyaki and rice, and a relatively new commodity product, mandarin orange chicken. “They can't get enough of it,” Knight says.

All production is done onsite except for baked goods, which the district produces in a central bakery operation at one of the school sites.

Knight is also a strong supporter of the Dept. of Defense program that delivers fresh produce to schools using commodity dollars.

“It gives us access to more fresh fruits and vegetables than we would otherwise be able to get,” she offers. “It helps us offer chef salads and a salad bar daily in the high school. We also have fresh fruit — apple, orange, clementine, kiwi, strawberry, melon mix, fresh pineapple — available daily at the high school and middle school level. The DOD dollars get us through about half the year, and then we buy. We try not to compromise the program once the commodity money is gone, but it definitely impacts our budget.

Knight says she was able to get the renovated space for the extra cafeteria because the growing enrollment was severely taxing the available space, making congestion a big problem, especially at lunch.

“We are a growing district and had run out of room in our cafeteria, so we were losing students during the lunch hour because we didn't have time to get them through lines,” Knight says.

Naturally, many juniors and seniors chose to exercise their open campus privileges and simply left to get lunch away from school.

“This is a small community, so kids can get in a car and be at a fast food place in about five minutes,” says Knight. “The restaurants around here know that and cater to it. One pizza place has a by-the-slice special that gets you in and out quickly.”

The lunch period is 25 minutes. In addition, with the school's block scheduling, some students gain even more time if they have an open block around their lunch period.

The block scheduling has also prompted the breakfast program at the high school to stay open until 10:30 to accommodate student schedules. Served only in the downstairs cafeteria, it offers a wide variety of grains and cereals as well as a daily entrée (hot breakfast sandwiches are especially popular).

Full meal breakfast counts are only about six percent of the enrollment, but Knight says that doesn't account for a la carte sales, such as the purchase of a bagel, which many students opt for.

But it is at lunch where the real success of Linn Mar High school's revamped meal program shines through. Given all the obstacles — the open campus, the crowding, the lure of nearby fast food — the success of the Food Court in keeping juniors and seniors onsite has been remarkable. Some 300 students buy lunch there on an average day, which is about a third of the upperclass enrollment and several hundred more than were buying lunch before the Food Court opened.