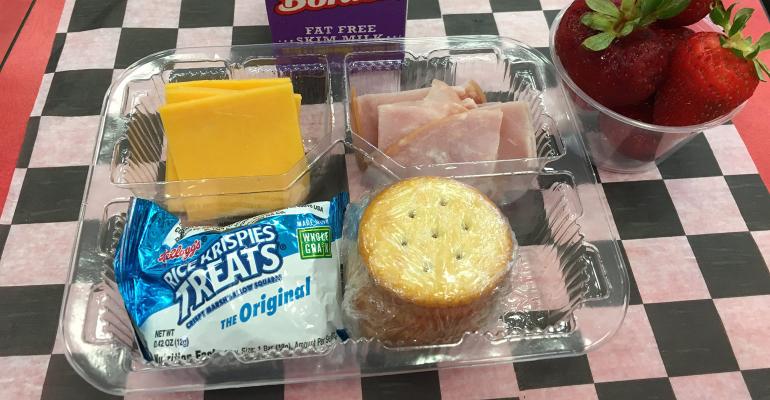 Kids, especially young kids, tend to opt for the familiar. That can be good or bad. It’s bad if it drives them to well-known junk food selections, but it can be good if an operator can use the trappings of familiar commercial products to draw youngsters to healthier choices.

That was the strategy behind a line of meal kits designed by the in-house school meal team at Charleston County Schools (CCS) in South Carolina. The selections are based on Oscar Mayer’s highly popular Lunchables line of retail meal kits, but they contain entrée/sides combinations that meet federal school meal guidelines for a heathy lunch for elementary school students.

“We spent months working on designing those kits because kids want it to look like they bought it in a store,” observes Walter Campbell, executive director of nutrition services for the district. “We went in-depth to make sure we had the right packaging and everything.” 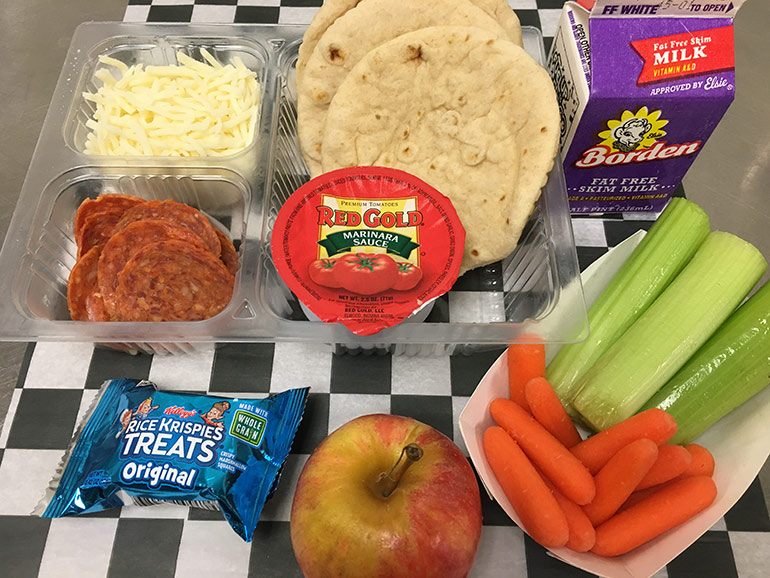 The pizza meal kit is perhaps the district’s most popular combo.

Introduced at the start of this school year, the kits are offered twice a week as a lunch option in the elementary school sites and generally have drawn quite a response, at least in the early going. “They knocked it out of the park,” Campbell enthuses. “I may have a school with 500 students and 250 of those having lunch will get the pizza lunch kit.”

Pizza is one of the choices, served each Friday in November. On Wednesdays, it’s a ham and cheese kit. They complement the other more standard choices on the menu such as cheesy French bread with marinara, herbed chicken wings, teriyaki chicken, chicken Parmesan with rotini, cheese quesadilla and orange chicken. The wings, the teriyaki and orange chicken and the quesadilla are all served with brown rice, and all meals come with a choice of side salads and fruits or veggies with dips. The salads can also be customized at a topping bar.

“We make them all ourselves,” Campbell says of the meal kits, which are an extension of the program’s focus on scratch preparation. It, for example, makes its own mac and cheese and grilled cheese sandwiches, with production done at each site rather than centrally. 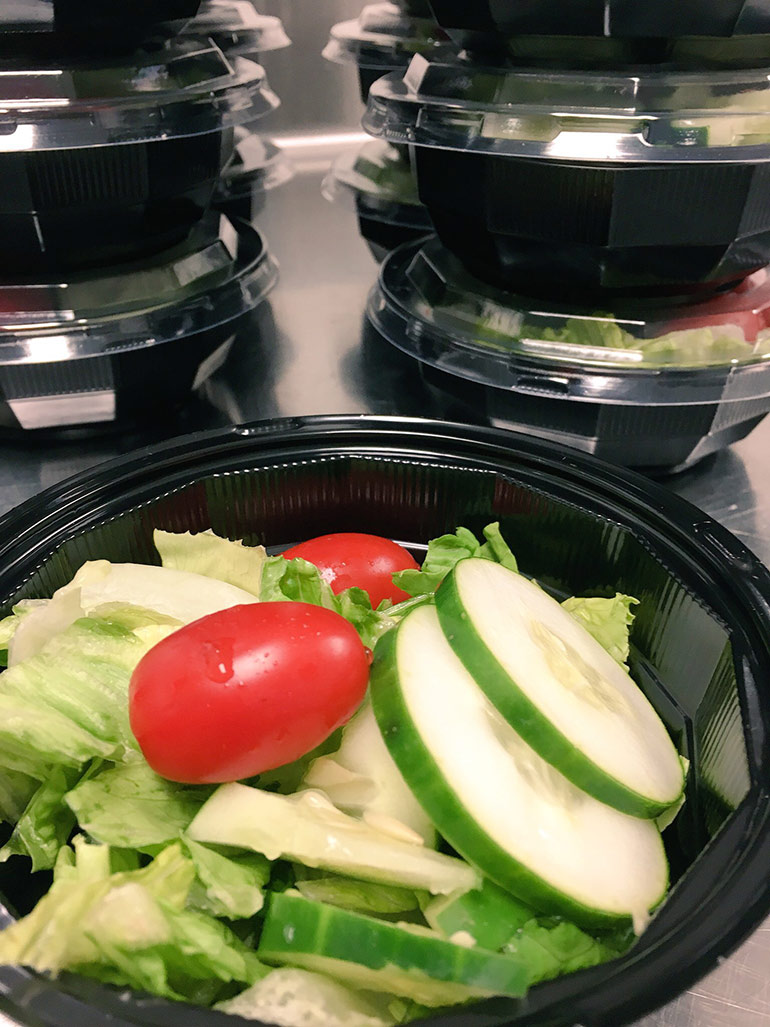 Side salads, available with all meals, can be customized at a special topping bar.

One sign of the increased acceptance of the menu among elementary students, Campbell notes, is that “we’ve got a 72 percent reduction in PB&J [sales], which to me means the kids really like the meals.” Peanut butter and jelly sandwiches, of course, are a traditional default choice of kids who can’t find something they like on the day’s menu.

The meal kits are part of a series of steps CCS has been taking to upgrade its meal program. It has used a sophisticated taste test initiative to determine which choices are likely to find the most favor among students.

This has resulted in a paring of the menu down to the highest-demand selections, such as the pizza and wings that are on the menu every day in the middle and high schools. As a result, the daily middle/high school menu is now down to about a half dozen selections as compared to over a dozen last year. Furthermore, each is made with high-quality ingredients such as whole-muscle meat for all chicken dishes. Even the pizza received a significant overhaul.

Also receiving closer attention is speed of service. The result has been a 6.2 percent boost in lunch participation systemwide so far this year. Even more encouraging, Campbell adds, is that of that increase, almost two thirds (64 percent) are cash students. 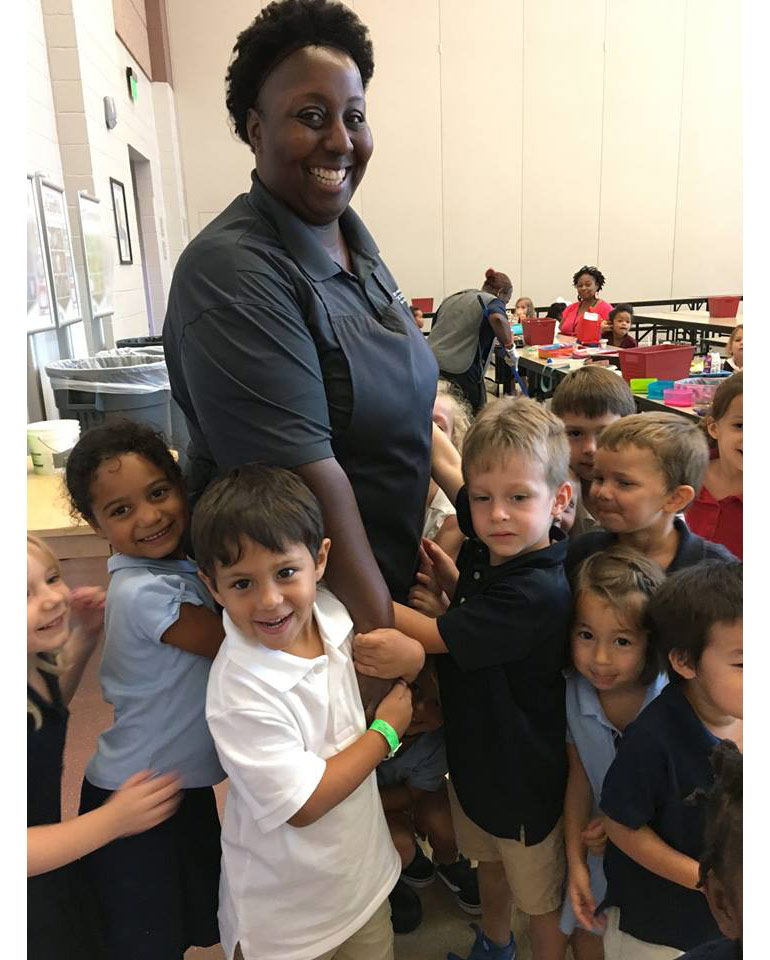