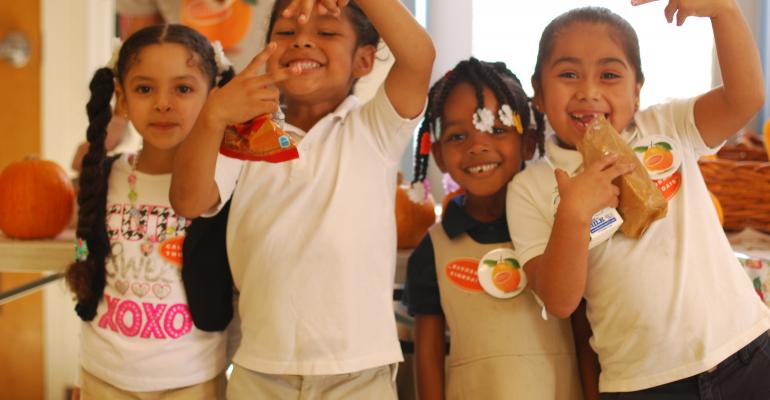 The district has reduced its carbon footprint by reducing meat, poultry and cheese purchases.

Oakland (Calif.) Unified School District (OUSD) has discovered a way to not only provide more than 22,000 nutritious lunches daily to students across 55 schools and 20 child development centers on a tight budget, but also do so while making sure the food is both sustainably and locally sourced.

“We’ve been evaluating our procedures since 2012,” says Alexandra Emmot, farm-to-school supervisor, who has helped usher these initiatives forward since she came to the district five years ago after serving in a similar role with Boston Public Schools. “We knew we wanted to transform our procurement model, but as we dug deeper into the supply chain, we realized it was more difficult than expected.”

“What attracted us to the Good Food Purchasing Program was that it gives an elegant and detailed explanation of what we mean when we say ‘local,’” says Emmot.

In a nutshell, The Center for Good Food Purchasing collects and analyzes data to determine where every purchased ingredient comes from—tracing it back to the name of an individual farm when possible. The Center then evaluates all of the data against the five criteria in its rubric, and assigns the district a star rating.

“We didn’t want to rush into policy adoption,” says Emmot. “We wanted to first understand where we were on the spectrum and then see what it would take to move forward.”

OUSD began by evaluating the 2012-2013 and 2014-2015 school years as a sort of voluntary test run. The data gathered served dual purposes as the district also partnered with Friends of the Earth, a nonprofit environmental network, to document how a 30 percent reduction in meat, poultry and cheese purchases over those same years shrank the school district’s carbon footprint by 14 percent. The study also found that the district saved 42 million gallons of water annually, and captured $42,000 in cost savings which was used for increased purchases of healthy fruits, vegetables, legumes and organic pastured beef. A bean and cheese tostado.

“We found that as a result of programs like meatless Mondays and California Thursdays where we serve healthy, freshly prepared school meals made from California-grown food each week, our star rating went from two out of five in 2012 to three out of five in 2014,” says Emmot. “It was interesting to see the data that we were able to capture serve dual purposes.”

Once OUSD had a better understanding of its data and rank, Emmot and Jennifer LeBarre, executive director of nutrition services for OUSD, set three-, five- and ten-year goals as part of their adoption of the Good Food Purchasing Program.

“If we hit all of our goals in year five, we’ll reach the five out of five rating,” says Emmot, noting that food costs and current facilities are the biggest challenges the district faces. “Currently we have 30 kitchens that cook from scratch with two central production kitchens. But we’re in the process of building one central production kitchen that will open in 2018, which will significantly change our capabilities.”

Emmot says two of the biggest hurdles with purchasing local is the volume of product the district needs as well as the logistics of getting it to each of the kitchens. Once the central kitchen is opened, the district will be able to receive more direct deliveries which can be properly handled in its produce processing and meat processing rooms.

“The Good Food Purchasing program is unique and nuanced,” says Emmot. “It’s not a road map that will take you from point A to point B. It’s simply a way to evaluate what you’re doing and then use that information to set goals on how you will move forward.”

Emmot says that the district has relied and will continue to rely on partnerships both locally and nationally to achieve its purchasing goals.

“It’s been an exciting process and as we get ready for the new kitchen to open. We’ve been developing recipes and standard operating procedures, writing grants and contracting with more local growers,” says Emmot. “And we’ve done this all while staying with the budget and serving our students every single day.”