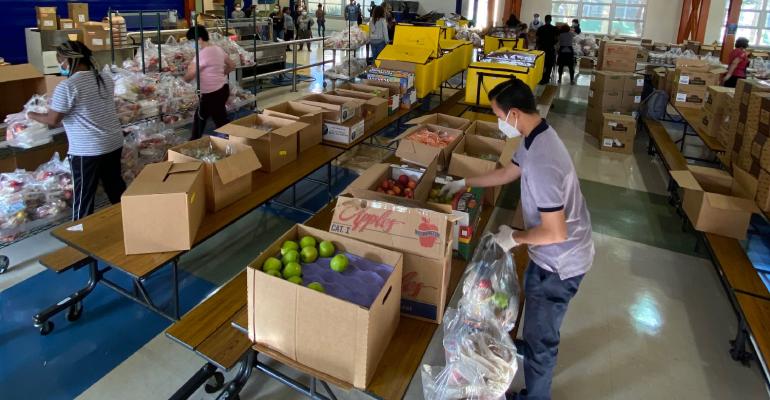 While some school districts figure out how to meet a growing demand for meals during the pandemic, California’s Oakland Unified School District (OUSD) is having the opposite problem. “Participation has just plummeted,” says OUSD Executive Director of Nutrition Services and Warehouse Irene Reynolds.

That wasn’t the case at first. When OUSD initially moved to remote learning in mid-March, Reynolds and her team were distributing individual pre-packed breakfasts and lunches to up to 18,000 children and families on any given day. (Pre-pandemic, the district served approximately 7,500 breakfasts, 20,000 lunches and 10,00 snacks daily.)

“Everybody was in that state of, we need to get everything we can to make sure our family has food and supplies,” Reynolds explains. “So we had a lot of participation in the beginning, even from neighboring towns and cities, because other districts may not have been open for foodservice like we were.” In addition to meals, OUSD also offered items like diapers, feminine hygiene products and even pet food—many of the things families may not have been able to provide for themselves, Reynolds notes. The district even partnered with local food banks to meet demand. 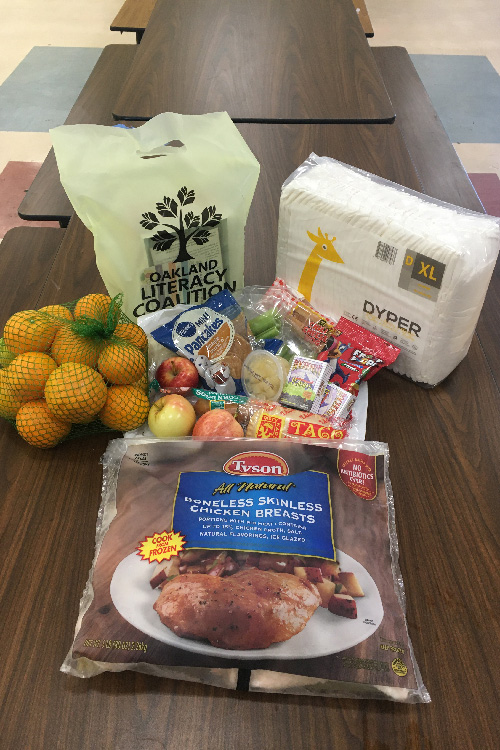 Photo: Families receive a mix of ready-made products, whole ingredients and other household staples like diapers.

Then things changed. Many families lost their meal eligibility when the initial set of waivers expired over the summer. But there also seemed to be a shift in thinking, as more people realized the current crisis wasn’t going to end anytime soon. “People were buckling down and figuring out new patterns and routines, how best to support their families and how to be focused in the morning [when remote learning was happening],” Reynolds explains. For many, running over to a distribution site to pick up premade meals didn’t seem sustainable.

Though the waivers were reinstated and meals could be provided without restrictions for the start of the current school year, the damage was done, Reynolds notes. By mid-August, OUSD was only serving around 2,500 lunches daily—and those numbers haven’t gone up. “We’re still struggling to bring that participation back,” says Reynolds. “People have discovered that this is not a temporary thing at this point. It’s ongoing.”

Late summer and early fall’s extreme wildfires made the situation worse. No one in Oakland was displaced, but poor air quality made it harder for OUSD employees to do their jobs safely and further disincentivized families to come out to pick up meals. While the problem wasn’t consistently ongoing, every time a fire cropped up within 50 to 75 miles of Oakland, the district was affected. “People had to decide, do I go out because it’s already unsafe because of COVID, and now we’ve got the smoke and the ash in the air and it’s ugly outside,” Reynolds says.

Reynolds and her team are trying to find ways to bring more participants back. But at the same time, she’s hesitant about making too many shifts. “Anytime you make a change, especially now as people are settling into routines, it disrupts people and confuses them,” she says. For now, OUSD has opted to stick with distributing meals twice a week at 22 sites across Oakland, but they’ve extended their distribution hours to give families more flexibility and have added dinner and snack offerings.

And new offerings are in the works. The district is in the midst of launching OUSD Eats, a home delivery service focusing on grocery staples instead of complete meals. “To get a bag full of manufactured pizzas and burgers and things that manufacturers actually produce for school lunch programs, it’s not quite as desirable for families as it would be to have a whole melon or tortillas with taco meat and cheese,” Reynolds says. Families who enroll in the program receive a week’s worth of food at a time.

Launched four weeks ago, OUSD Eats currently serves some 2,200 students, with more, Reynolds hopes, to follow. In the meantime, her team is adapting to the new service—and trying to find space to store product in between weekly food drop offs. “We have schools that have enough fridge and freezer capacity for small communities of kids that get deliveries daily. Now we’re trying to get deliveries once or twice a week, so the logistics are proving to be challenging,” Reynolds says.

But Reynolds and her team continue to power through, despite the hardships and uncertainties. “Their hearts are with the children,” she says. “They want to make sure their kids get their food. And I try to be their biggest cheerleader.”