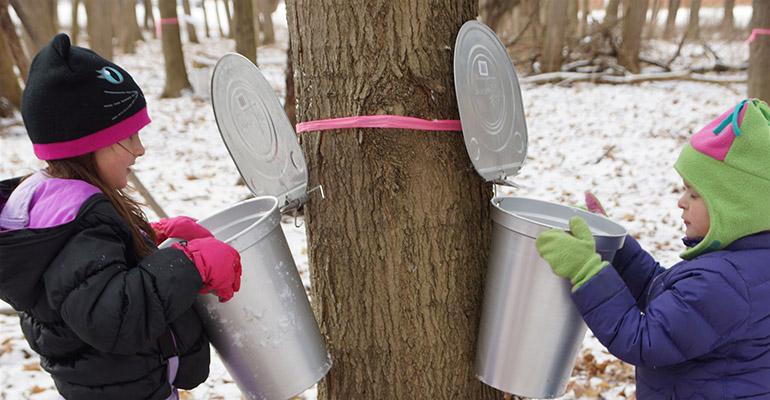 First-graders, their teacher and the school chef gather sap, boil it down and then enjoy it on French toast (and many other menu items).

Sap begins to flow from maple trees when there has been a series of relatively warm days followed by chilly nights. Northeast Ohio’s on-again off-again warm temperatures this winter have been a dream for maple syrup production at Old Trail School, an independent pre-K-8th grade day school in Bath, Ohio. The campus is in a woodland valley, with rolling hills, a four-acre educational garden, and lots of maple trees.

“This season has been really good, because the weather has been so warm, then cold, then warm again and cold again,” Williams says, adding that the time to tap maple trees in Ohio normally takes place in late winter but usually not this early.

Maple syrup season technically begins in the fall. That’s when, for the past few years, first-grade teacher Alice Goumas takes her students into the forest, where they measure the circumference of trees, selecting the best ones to tap. The science: When trees photosynthesize, they make sugar during that process. It’s used for growth, and when the trees stop growing, extra sugar is stored for the spring. Looking at the rings inside the wood of a tree, there are rays of cells running outward to the bark, and those cells hold the sugar. The tree is tapped with a spile (or tap) and sap is collected in a bucket.

“They tap some trees on the north and south side to discuss why the north side will yield more sap,” Williams says, revealing “because it gets more sun.”

The students collect the sap and bring it into the kitchen, where Williams is waiting with a 50-gallon kettle.

“First we strain it with a chinois that has a coffee filter-type thing attached to it to get any debris out of there,” Williams says. “Then it goes into the kettle, and it takes a good 12 hours to boil it down. You’re boiling all the water off and then you’re left with the amber-colored syrup. It takes about 300 gallons of sap to get about 3 gallons of syrup.” The students check on the syrup a couple of times while it’s boiling down, and they get to taste it throughout the process. Williams describes the fresh sap straight from the tree as tasting like “slightly sweetened water,” nothing compared to the mellow, rich, unmistakable maple syrup that it will become.

Once the process is complete, each student gets a little bottle of maple syrup to take home, and the rest is destined for Williams’ culinary creations, which include maple-rosemary pork loin on a carving station, stuffed maple spaghetti squash and the ever-popular French toast day.

Williams, who previously worked at the Smucker’s corporate cafeteria, says he’s glad to be working with kids (he has two young kids of his own), and also that the school is so focused on sustainable agriculture.

“It’s awesome to be at school that connects the edible to the education,” he says.