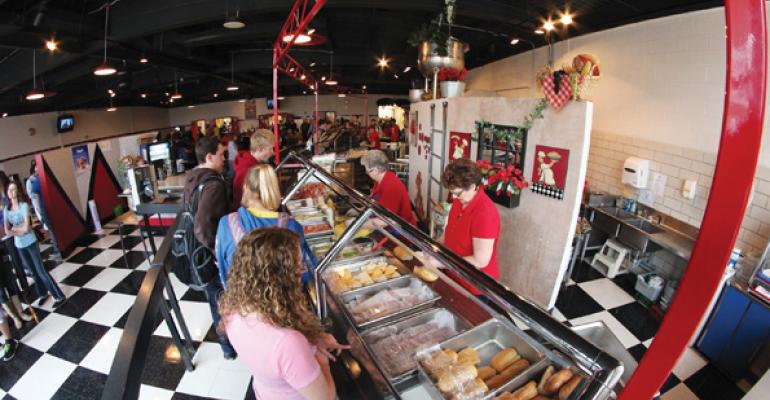 In 2014, K-12 operators will face a list of challenges ranging from tighter standards for school meal breakfasts to unintended consequences from new rules regarding the sale of “competitive foods” on school grounds.

The big trend in K-12 is “more of the same,” as final requirements from 2010’s Healthy, Hunger-Free Kids Act are implemented.

These include tighter requirements for reimburseable school breakfasts; new rules for “competitive foods” (snacks, a la carte and other items distributed on school grounds); and a few additional provisions still hanging fire from SY 2012-2013.

(FM's recent look at K-12's Power Players—the 50 largest school districts in the country—identified some clear trends in terms of new programs and opportunities in the segment. Click here to read about them in A Watershed Year for Child Nutrition.)

One of the most expensive parts of the breakfast rules takes effect July 1. “It requires that a full cup of fruit be served (not just offered) at breakfast, beginning in the 2014-15 year,” says Barry Sackin, president of B. Sackin & Associates. FSDs believe it will increase costs and plate waste.

Many districts are struggling with reduced participation they say is the result of the first wave of tighter standards. “In three years we have lost 1.8 million kids from the lunch program, based on average daily participation,” Sackin calculates.

“We’ll still have to see what USDA does and whether it actually creates a waiver program,” cautions Diane Pratt-Heavnor, a spokesperson for the School Nutrition Association.

Advocacy groups pushing  “real” and natural food requirements are having an impact. “The Urban Alliance (a group of large school districts) is developing a common spec for antibiotic-free chicken and a bill introduced in California last year would have prohibited ‘plumped’ chicken,” (It later failed in committee ), says Sackin.

“If such efforts take hold, they’d have a big influence the industry.”

For links to a variety of stories and reports that expand on these and other issues, go to FM FYI: Further Readings on Trends Affecting K-12 Foodservice in 2014.

Longer term,  2017 looms large because of additional required sodium restrictions in school food. SNA is calling for a delay “pending scientific data to support the need for these levels,” says Pratt-Heavnor. “The original Institute of Medicine report acknowledged a need for periodic reviews of the standards based on research.”