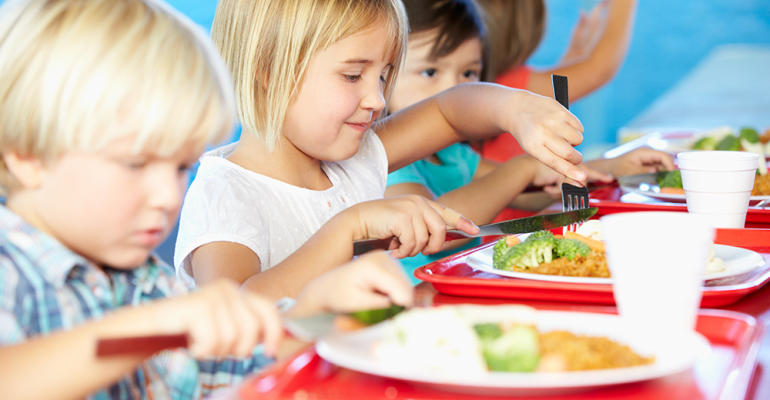 Study seeks to find out if selections emphasizing ingredients like eggs, ham and sausage make a difference in behavior and academic performance.

A pilot program underway at the middle school site of the Center School District in Kansas City is testing the effects of protein-rich breakfasts on student behavior and attention. The program was implemented for a brief four weeks at the end of the 2017-2018 school year with just the eighth-graders, and has now been expanded to all of the some 560 sixth- through eighth-graders in the building this fall.

The study, funded by the Egg Nutrition Center and run by Purdue University, seeks to find out if consuming more protein in the morning has an effect on behavior and academic performance.

“From a science standpoint, a lot of this has to do with protein’s satiety effect on blood sugar levels so that [it remains] steadier throughout the morning,” explains Michelle Kruse, wellness coordinator for the district. “We want to see if that will change mood and the ability to concentrate and [how it affects] cognitive function. [After all,] when you’re hungry, you’re not concentrating, so if we can keep them nice and full, then that satiety throughout the morning will help their concentration all morning long.”

The brief trial run at the end of the last school year was just a quick pilot to test recipes and protocols before rolling it out to all the students this fall, says Kruse.

The program this fall involving all the students in the middle school building is being run in phases to test the effects of content of the morning meal.

In the first eight weeks of the fall semester, students received a typical school breakfast of items such as cereal or cereal bars, whole-grain Pop Tarts and so forth. The next eight weeks then featured high-protein selections such as egg muffin sandwiches or burritos with sausage or ham. Students are surveyed several times over the course of the day on their mood and energy level, and the results will be compared to see if there are variances.

That phase of the program is still in its first stages as the study is scheduled to run through the current school year, but some early indications—admittedly anecdotal at this point—from the trial run with the eighth-graders last spring seem encouraging, with Kruse reporting that self-control issues declined and morning behavior referrals “drastically decreased.”

The effect on breakfast participation is harder to determine because the protein breakfast pilot coincided with the introduction of breakfast in the classroom (BIC) districtwide, which obviously produced a big participation jump by itself.

Once the middle school-based phase of the study is completed, “we hope to move to other grades and other buildings as time goes on,” Kruse says, though probably not this school year, she adds.

Center Schools originally got involved in the protein breakfast pilot while it was in the process of applying for a BIC grant through the Partners for Breakfast in the Classroom organization.

“I was at a conference where Heather Leidy, director of clinical nutrition at Purdue and now director of our study, was speaking about protein and the differences you see in cognition, behavior and so forth,” Kruse recalls. “And I’m thinking, I’m applying for a grant through which we’ll be serving our kids cereal bars, so what can we do to make a difference? Well, we started talking, and once we got the BIC grant to get the equipment we needed, we were able to add this study on top of it.”

The protein-rich selections served under the program include a variety of dishes, many containing eggs, as well as ham, sausage and protein-rich dairy foods like yogurt. Kruse says the most popular selections are those that mimic familiar dishes like Egg McMuffins and burritos and “anything with hot sauce! The things you see in restaurants are the things the kids tend to gravitate toward.”