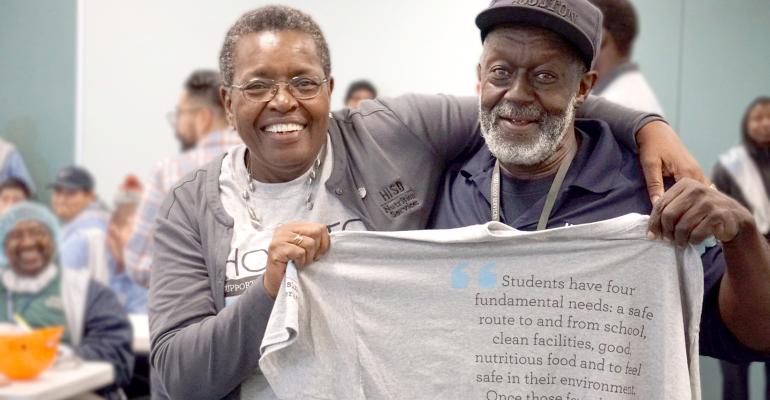 School food helps students and their families after Hurricane Harvey

With support from her new community, Betti Wiggins is revamping school food in a post-Harvey Houston.

In Detroit, Betti Wiggins spent years turning the district’s school food program into a model of health and one of the most profitable programs in the country. And she received accolades for doing so. When she accepted the role of officer of nutrition services at the Houston Independent School District (HISD), it was a chance to prove she could replicate her accomplishments in Detroit on a much larger scale. Little did she know, there was a storm coming.

In her new position, she was tasked with creating many of the same changes she made in Detroit—cooking from scratch, buying local produce and expanding meal programs—but with quadruple the number of students. (There are about 55,000 students in Detroit Public Schools Community District and 213,000 in Houston.) Betti Wiggins hands out lunch to students at Atherton Elementary School on the first day of school.

She was ready for the challenge. “I made a move to Houston based on the opportunity to put an exclamation point on my career,” says Wiggins.

Just a few months after Wiggins moved to Houston, Hurricane Harvey hit, bringing the city to its knees and causing billions of dollars in damages. Many of Wiggins’ employees and students lost their homes. Schools were damaged, and others were used as emergency shelters. Parents lost their livelihoods. Families from all economic backgrounds needed to be fed.

“Food is a priority for maintaining the health and stability of a family,” Wiggins says. “One of the things that [school food programs] do very well is mass feed people. And so here in Houston, we're doing breakfast, lunch and supper. We're even doing Saturday [meals]. We're doing whatever we can do to meet the needs of our kids first. But to support their families, secondly.”

Wiggins quickly requested and received a waiver from the USDA to feed all students in the district’s 283 schools at no charge. (Previously, schools had to show documented need to receive free meals in Houston). During a lunch for community partners, Betti Wiggins is gifted with a garden-themed gift from Kellie Karavias, culinary arts and garden teacher at Gregory-Lincoln Education Center.

“We viewed [the waivers] as a way of supporting our families, to get them back on their feet economically," she says. "Who's got time to be worried about lunch money when you don't have a roof over your head?”

Throughout the crisis, Wiggins was amazed at how the community coped. She had resources she could never imagine in Detroit, she says. And she received government help, too.

“One of the things that was so gratifying about being in Houston and being in this community is how people really pull together,” she says. “We’re recovering from Harvey, but there are still people out there that care for us, that are helping us.” FEMA, the Red Cross and the USDA all came to the community’s aid. Today, life hasn’t gone back to normal for all residents, but schools have reopened. Wiggins’ plans for overhauling the school food system have only been delayed, but not halted, thanks, in part, to the support she receives from the district.

Her most significant initiative will be to move the district’s program from a management company to a self-operating system. This is something she did in Detroit to great success. And in Houston with four times the students, it’s “just a matter of a bigger pot on the stove,” she says.

Wiggins has a bigger pot and a lot more infrastructure in Houston, including a sizable manufacturing facility and large-scale distribution system.

There’s also a communications team to help get the word out. “They're putting me in the right places at the right time to make sure that the community is aware of what we're doing because that's where you get support,” Wiggins says. “People all want to be included; they don't like things be sprung on them.”

Some of her plans include new menu items that consider the students’ rich culinary heritage. “You got a little bit of everything going on here, from Hispanic food and Indian food, to just good old Tex-Mex food.” She also plans to purchase produce from local farmers and install salad bars in the district’s elementary schools.

“The great thing about Houston is you can do anything because you've got the resources, you've got the community support and you have the staff,” she says.

How Houston Independent School District is working with the Houston Food Bank to feed the city’s families during coronavirus
Apr 07, 2020