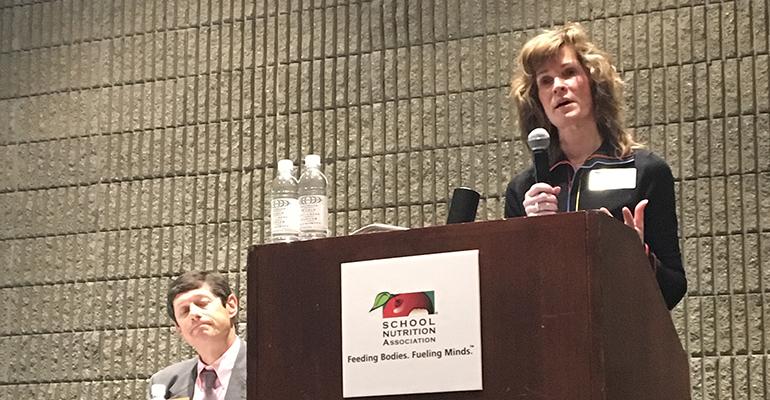 School Nutrition Association (SNA) legislative and government affairs leaders were upbeat about the results of their advocacy efforts that loosened several well-meaning but burdensome requirements.

“We have three of our ‘asks’ checked off,” Davis said, referring to flexibility in 2017-2018 school meal requirements. “In terms of our advocacy work, that’s an incredible win.”

First, state agencies may offer exemption from whole grain-rich requirements. Next, Target 2 sodium requirements will not take effect through school year 2020. And finally, one-percent flavored milk may be served.

Davis also praised Secretary of Agriculture Sonny Perdue’s recent show of willingness to “let the people who do the work shape the work,” citing Perdue’s comments at the House Appropriations Committee Hearing May 24. Said Perdue, “My strategy is to listen to those people who know best and are closest to the issue and how we can give them the flexibility to provide nutritious healthy meals in a way that doesn’t constrain them.”

Davis qualified his remarks, adding, “This isn’t a dig on the Healthy, Hunger-Free Kids Act and the great work the former first lady did. School food is great. Maybe some schools don’t need the extra help and flexibility depending on where you live and what your students find acceptable, but some do.”

According to Schuchart, the outlook for 2018 appropriations includes a likely continuing resolution when the 2017 budget expires Sept. 30. There’s a possibility of an omnibus—putting together several spending bills for approval—but that’s unlikely. “That my not be real likely, because people can’t agree on anything. We just don’t know so we have to wait and see.”

Among other “wins” for the SNA is a $1 million appropriation for program simplification in school foodservice. “This is to look for ways to simplify and streamline,” Schuchart continued. “A third party will be asking school food professionals how to make your jobs easier. Our goal, when this study is completed, is to have the results rolled into the next Farm Bill.”

Said Schuchart, “We’re not looking to abdicate responsibility. We just want to make sure we’re not doing things [like paperwork] more than once, so that we can convert that to things on the lunch trays and more time with our kids.”

Currently, the farm bill does not cover commodities, something the SNA would like to change, citing benefits to both schools and farmers. “This would be so helpful for farmers,” Schuchart said. “We have a depressed agricultural economy and it would help farmers do more.”

Since, “everything in Washington is ‘Who’s with you?’” Schuchart recounted a meeting between SNA representatives and the American Farm Bureau Federation, which went very well.

“This is [a group] we want with us,” she said. “They have to run it up the chain, of course, but they saw how important it is.”

The hot-button topic of school lunch “shaming” was also addressed.

“This is not a child-cashier problem,” Davis said. “This is a much bigger community-family-teacher problem. We need to look for solutions on a state level. We need to kick this out of the kitchen.”

Another challenge ahead for school meal legislation is block grants, which means money would go to each state and be distributed at the state’s discretion.

“In some states, [the money] may go to lunch trays, but in others, it may go to building a bridge,” Davis said. “Since we don’t know what block grants would bring, we just go on the fact that it could be devastating. No one knows what would happen to commodities. There’s so much unknown.”

In spite of Davis’ prediction of “devastating potential if block grants come through,” an SNA survey indicated that SNA members are split on their stance on block grants.

The SNA has a task force to stop the block, which will be looking at several strategies, including a strong grassroots email campaign with a consistent message, allied coalition development and economic impact studies.

Davis advised attendees to “make sure you keep your personal stories on the forefront. Your legislators want to know how this is impacting their constituents.”