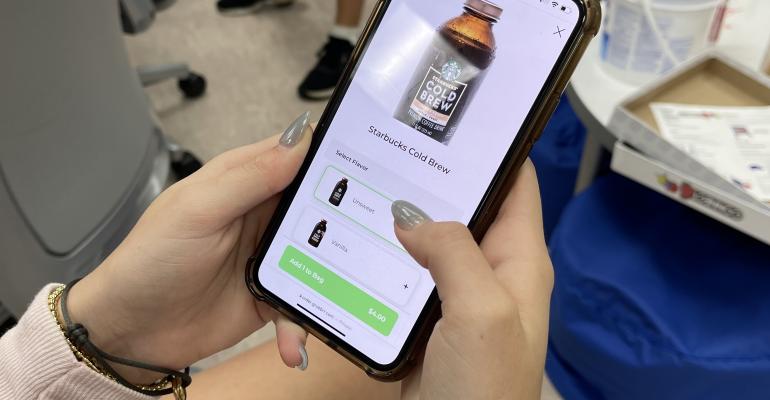 But the 830 high schoolers on Upper Campus have access to something special: a retail cafe located in the student union building where they can purchase specialty coffees, smoothies, breakfast items, sandwiches, salads, pizza, and snacks. The cafe is open as soon as students arrive at school, during lunch, and during breaks. By contrast, the shared cafeteria is open only at lunchtime.

When Flik Independent School Dining started operating Pine Crest’s dining program in 2019, they added more food options in the cafe and upgraded coffee service from machine-generated lattes and cappuccinos to barista-style specialty drinks. But as options grew, so did the lines. 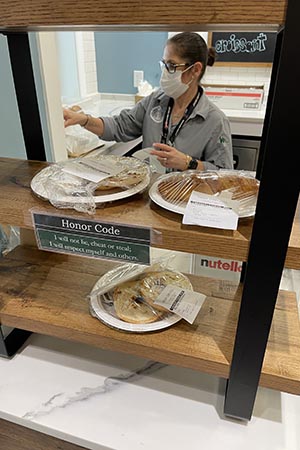 Photo: The system makes it easy for dining staff to add new items and to highlight desirable ones. It also makes it simpler to upsell.

The cafe, which is operated by two staff members, wasn’t able to handle the demand. Students would rush to get in line and spend their entire break waiting. When kids abandoned the line to get back to class, the cafe missed out on orders. The dining team realized they needed a different solution.

So they installed a kiosk and mobile ordering system that allows students to pre-order food and drinks. The staff says the system is a game-changer.

“It’s a lot easier for the person who’s working there,” says Alex Robles, Pine Crest’s food service director. “In the days before, there was a huge queue.” Now, he says, “it’s much more feasible for all parties involved.”

To pre-order food from the cafe, students tap their order into the kiosk or order using a QR code. Crisp photos accompany each item on the digital menu, helping students quickly identify what they’d like to order. Students pay for items at the cafe through automatic deductions from a student account. Faculty and staff pay through payroll deduction.

The dining staff prepares food as the tickets come in and put them on racks for students to pick up. The system allows them to fill more orders—a lot more orders.

According to GRUBBRR, the company that supplied Pine Crest School with self-ordering technology and kiosk software, the school’s orders jumped 30% and revenue increased by almost 43% over an eight-month period.

Andy Koobir, the school’s executive director of dining, says the cafe has not negatively affected the school’s cafeteria program. The cafe “has generated more revenue and really hasn’t lessened the production in the kitchen for lunch.” 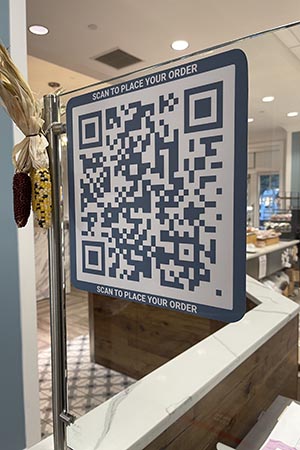 Photo: To pre-order food from the cafe, students tap their order into the kiosk or order using a QR code.

The digital ordering system hasn’t affected food prep, either—staff members still prepare much of the food the day before. But because they have extra time, they’ve been able to add new products. New options, combined with the technology’s upselling capabilities, contribute to rising sales.

Chris Mertens, vice president of U.S. sales for Samsung, which supplied the school with their kiosk, attributes the steep rise in sales to consumer control. “It gives the students the control of ordering it when they want it. The flexibility of the system—and the flexibility of the kitchen—expands exponentially as a result.”

The cafe menu includes simple breakfast items, such as bagels and croissants. Lunch items on a recent version of the menu included a mozzarella, tomato and basil pesto sandwich, grilled cheese, a grilled chicken Caesar salad, and a Greek salad. Some of the most popular items are the pizza and the buffalo chicken flatbread. “The two ovens are busy all the time,” Robles says.

Drinks range from solo espresso and cold brew to a bevy of flavored lattes (including hazelnut, cinnamon, vanilla and caramel).

Robles says the system is simple and user friendly. To get started, two staff members trained at the GRUBBRR facility to learn the new system. Since then, they’ve only contacted the company on a few occasions for support.

The system makes it easy to add new items and to highlight desirable ones. According to GRUBBRR, the software can feature a popular item or delete out-of-stock options, It can also curate the menu according to time of day by, for instance, highlighting breakfast options in the morning.

Pine Crest only needed to make a few changes to the kitchen: they upgraded their display cases and put in new racks where students pick up their orders.

Overall, the kitchens—and the students—are glad to have options that make school breaks a little brighter, and don’t keep people waiting.