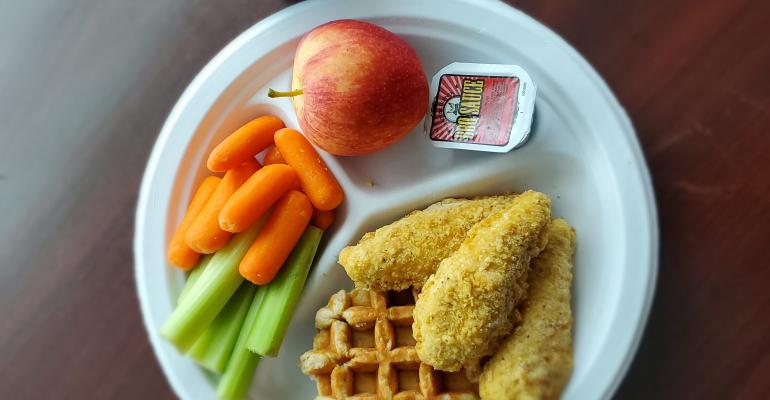 The Dallas ISD, with about 145,000 students and more than 220 schools, operates its own expansive warehouse and 18 delivery trucks.
News & Trends>K-12 Schools

Shortage of nonfood items forces Dallas schools to get creative

With a shrinking inventory of paper and other nonfood supplies, menu management has become a priority.

The incomplete, late or dropped orders were bad enough, but then suppliers were frankly admitting they could not deliver requested items and didn’t know when they would be available at all. The final omen was the diminished inventory: in a normal year, the huge warehouse for the Dallas Independent School District would maintain a 30-day supply of paper and other nonfood items. In the spring of 2021 that stockpile sometimes dwindled to three days’ worth.

The supply glitches are only getting worse. “Recently we placed an order for 1,250 cases of plates; the vendor delivered 164 and said they have no idea when or if they can supply the rest. It’s a disaster,” says Michael Rosenberger, executive director of food and child nutrition services for the district.

“Nonfood and paper are core essential items because you can have the best, most amazing food, but if you have nothing to serve it on and students have nothing to eat it with, then you have a real problem,” Rosenberger adds.

The solution, at least for now, was to adopt a finger food menu several times a week. On Tuesdays, none of the options require cutlery; on Thursdays, breakfast is all finger food. The food choices are curated from the regular menu: whole fruits, chicken tenders, other handheld items.

“We’ve had to be very nimble to make sure we meet all the nutrition requirements,” Rosenberger says. “USDA has a waiver, and so far we haven’t had to use it, but we’re keeping that in the tool box.”

When it’s practical, schools are also serving meals in paper bags instead of on a disposable plate or tray, which conserves paper products.

“The students love it—in fact, they probably haven’t noticed that much difference in the menus,” Rosenberger says. They don’t miss the cutlery. “If you get a meal at a drive-through window normally you’re not getting flatware with that. Kids get it.”

To keep students and families in the loop, the schools have turned to social media and signage informing everyone that the printed menu may not be reflected in the cafeteria that day because of supply disruptions.

The district has also pivoted to alternative sources for products. USDA and the state agriculture department have temporarily waived some procurement rules to allow the district to purchase off bid when the approved suppliers are unable to deliver needed materials. Rosenberger says he will also be asking the school board for permission to join purchasing groups that will give the district access to more suppliers.

The Dallas ISD, with about 145,000 students and more than 220 schools, operates its own expansive warehouse and 18 delivery trucks. Most items are purchased directly from manufacturers. “We are in effect our own distributor,” Rosenberger says.

While finding paper and nonfood goods has been the biggest headache, the pipeline for food is clogged as well. Rosenberger says orders are delayed and suppliers have cut back on the scope of products they offer because of labor and raw ingredient shortages and transportation challenges. Some simply can’t obtain packaging for their products. He, like many others, calls it a perfect storm.

Rosenberger says the supply chain issues may continue into 2022, but he thinks procurement for school districts has changed substantially and will remain that way into the foreseeable future.

“So much of the procurement model is built on a steady supply and stable logistics, and we’re now seeing the impact when instability is introduced into that system. There’s not a lot of margin for error,” he says. Just-in-time manufacturing may have worked for years, but “all you need is one little wave in the supply chain and all of a sudden you can’t make what you normally make. All of us will need to look at systems that have worked for the last 30 years and tweak them to adapt to a more chaotic environment.”

The district has contingency plans if the supply glitches persist, Rosenberger says. “We have tentative plans to turn Fridays into ‘Finger Food Fridays,’” he explains. The idea is to make it fun, something to look forward to.

Often the finger foods are a win-win. “Chicken tenders are one of the students’ favorite items. Nobody is complaining about chicken tenders if we serve them on an additional day,” he says.