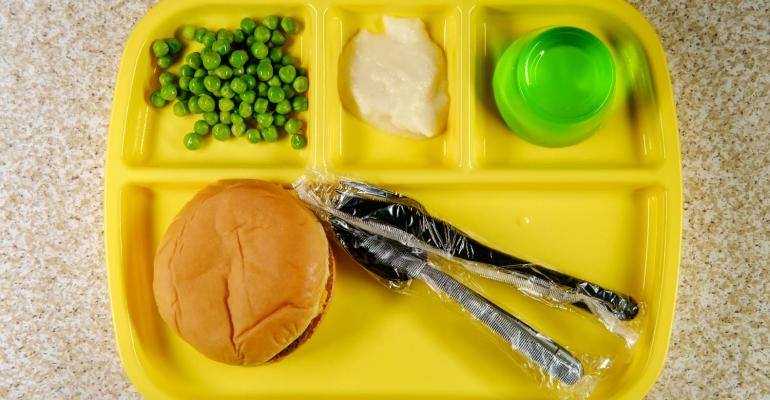 EzumeImages / iStock / Getty Images Plus
While officials assure parents that the food served will remain healthful and appealing, some kids are already rebelling against the reduced quality and variety, a situation that may have long term aftereffects on participation and customer perceptions even if/when the current situation is resolved.
News & Trends>K-12 Schools

With schools and colleges beginning their fall terms, early indications of troubles with labor and product availability are cropping up.

Some universities and K-12 school districts have begun fall academic schedules as August nears its end, and their experience is showing signs that troubled times may be ahead for their dining programs beyond the uncertainty brought on by the resurgence of the COVID virus through mutated strains like the Delta Variant, which has some institutions rethinking in-person instruction.

However, for programs that have started fall schedules, issues like staffing shortages, delivery issues and product unavailability have hampered meal service in some locations, a situation predicted by a recent School Nutrition Association survey of its membership that found 97% concerned about supply chain disruptions and 90% about staff shortages.

For some, the situation has forced cutbacks on what they are serving. For instance, in the Bismarck Public Schools in North Dakota, Child Nutrition Director Michelle Wagner recently told local media that “we’re going to have to slim down our menu. Instead of offering our two hot options, and our pizza, and our subs, and our salads, we might have to slim it down just a little bit. Just to try and maintain and make sure that the kids still get something to eat.”

In South Carolina, officials in Anderson School District One warned parents to expect immediate and unpredictable changes to menu plans because of supply issues with some product lines such as poultry, paper products and some canned vegetables. In some cases, supply chain issues interrupt what had been a growing farm-to-school movement, while in others, it has meant not having some popular menu options.

While officials assure parents that the food served will remain healthful and appealing, some kids are already rebelling against the reduced quality and variety, a situation that may have long term aftereffects on participation and customer perceptions even if/when the current situation is resolved.

In the Gwinnett County Schools in Georgia, one of the country’s largest public school districts, some parents have claimed that their children were being underfed with substandard meals, with one saying her child got only cereal for lunch. The district disputes the more extreme claims but admits the supply chain is “experiencing extraordinary challenges” and that menu offerings will vary from school to school and “may not reflect the planned menu as we use available resources.”

School meal programs have built some impressive community relations and trust over the year and the half of the pandemic in keeping meals supplied to kids and families, but the product and labor shortages are threatening to undo some of that.

Schools have been getting creative to try and deal with the situation. In Maine, Chef Ryan Roderick at the RSU 14 in Windham has a plan to stretch the tomatoes he sources locally each year as far as they will go. "Slice them up, roast them off, we'll give them a little puree and then freeze them and that way we can use them as we would canned crushed tomatoes for tomato soups, marinara sauce, chili – anything that calls for that," Roderick said.

RSU 14’s School Nutrition Director Jeanne Reilly says vendors are claiming that they neither have the food or the manpower to deliver it to schools so "many schools are competing for that same truckload of food." One possible solution is more local sourcing, she says. "If we can get it from our local farmer, it's a better value for us and a better value for our community."

Supply issues are one concern, but so is the availability of sufficient staff.

In Rapid City Area Schools in South Dakota, Student Nutrition Manger Krista Leischner noted that there are 17 job openings across the district, more than previous years. The Fayette County Public Schools in Kentucky are down 104 cafeteria positions, forcing central office staff to fill in as the district desperately tries to draw candidates, hiring a full-time recruiter just for that task.

The Rutherford County Schools in Tennessee are offering a $500 bonus for recruiting and retaining cafeteria workers in an effort to fill 30 open positions, a desperation measure strategy that emulates what many commercial competitors for workers is doing but puts a great deal of financial pressure on school meal programs already suffering fiscal shortfalls from the COVID pandemic’s effects.

“We’ve been making some changes to what we do, our priority right now is serving breakfast and lunch to our students so, we are moving people around, we are doing the best we can with the people that we do have and hoping to bring more people on board so, that we can so we can relive some of that pressure from our current staff and be able to do more for the students,” she told local media.

K-12 districts aren’t the only ones feeling the pinch. Universities are experiencing similar issues, as are commercial restaurants.

At Binghamton University in New York, Binghamton University Dining Services (BUDS) will open the fall semester with significant staffing challenges despite efforts like job fairs, working with four different temporary employment agencies, offering sign-on and referral incentives to current employees and promoting open positions area-wide. Among the changes being forced by the situation are delayed openings or reduced hours at some dining venues.

Miami University is indefinitely closing several dining venues such as its Bell Tower Commons due to understaffing. “Unfortunately we are dealing with a staff shortage, and we are working hard to recruit the best talent that we can to fill our roster,” Executive Director of Food and Beverage Geno Svec stated. As the dining halls add staff throughout the semester, he said they may expand hours while putting out a plea to students to come work in dining locations.

Dinner food shortages recently prompted Vanderbilt University Dining to issue meal credits to students to compensate for the substandard service. While the department doesn’t expect the supply challenges such as late or incomplete deliveries and other backup issues to go away any time soon, it is taking steps like building an on-campus “commissary kitchen” to reduce wait times for Rand Grab & Go Market orders and opening additional food lines in dining halls to increase service efficiency.