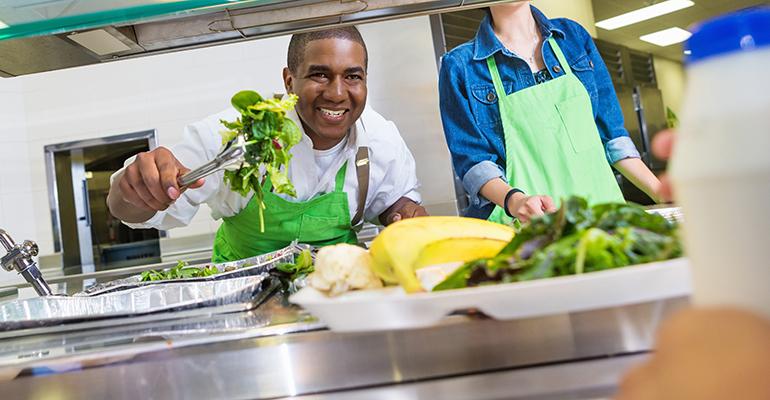 Getty Images
The overhaul of school lunch nutrition standards mandated by the Healthy, Hunger-Free Kids Act (HHFKA) of 2010 seems to have driven dramatic improvements in the healthiness of school meals.
News & Trends>K-12 Schools

The updated nutrition standards for school meals mandated by the Healthy, Hunger-Free Kids Act significantly improved the nutritional quality of the meals and their consistency with the Dietary Guidelines for Americans, according to a study funded by the Food and Nutrition Service of the United States Department of Agriculture.

The overhaul of school lunch nutrition standards mandated by the Healthy, Hunger-Free Kids Act (HHFKA) of 2010 seems to have driven dramatic improvements in the healthiness of school meals as defined by the standards set by the government’s Dietary Guidelines for Americans, according to a study published recently in the Journal of the Academy of Nutrition & Dietetics. The study was funded by the Food and Nutrition Service (FNS) of the United States Department of Agriculture, and only looked at the composition of the menus and not at how much of it was actually consumed.

This recent study seems to confirm the conclusions of a report released a year ago by the FNS that presented findings from its School Nutrition and Meal Cost Study as well as other studies conducted in the past few years tabulating the impact of HHFKA in the face of recent USDA moves to ease some of the Act’s restrictions.

The goal of the HHFKA nutrition standards implemented during the 2012-2013 school year was to bring school breakfast and lunch menus in line with the government’s Dietary Guidelines for Americans, which are designed to help combat obesity and other diseases linked to diets heavy in calories, sugars and fats.

To conduct the research, the study used school menu data from two cross-sectional, nationally representative studies of schools participating in the National School Lunch Program. One was the School Nutrition and Meal Cost Study conducted during the 2014-2015 school year and the other was the fourth School Nutrition Dietary Assessment Study conducted during the 2009-2010 school year.

The study’s results stated that “[t]otal Healthy Eating Index 2010 scores for school lunches and breakfasts increased significantly after the updated standards. Between SY 2009-2010 and SY 2014-2015, the total score for school lunches increased from 58% of the maximum score to 82%, and the total score for school breakfasts increased from 50% to 71%. For both meals, component scores increased by more than 20 percentage points for whole grains, refined grains, and empty calories, as well as for greens and beans for lunches and whole fruit and sodium for breakfasts.”

The study found that in addition to school meals getting healthier, they were also being eaten by more students and that meals brought from home had also gotten healthier over the same period.