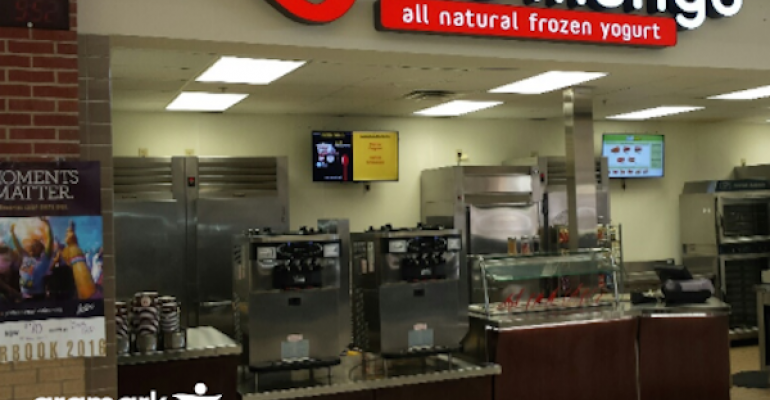 The big news at the high schools in the Northwest Independent School District (ISD) this fall has been the introduction of genuine Red Mango branded frozen yogurt stations to the cafeteria mix. The popular commercial chain is working with Northwest’s foodservice provider Aramark in piloting the brand in a K-12 setting at Northwest’s three high schools.

Red Mango joins a number of other commercial-style branded stations in the cafeterias of the growing district located to the northwest side of the Dallas-Fort Worth metroplex. The concepts, developed by Aramark specifically for the K-12 market, range from Crust City Pizza and Rock Hill Burrito to Java City coffee bars and P.O.D. Market retail nooks.

The latter is a kiosk concept (the name stands for Provisions On Demand) that retails Java City branded coffees and various bottled beverages and a la carte selections ranging from salads, wraps and sandwiches to fruit/yogurt/cheese and hummus/veggies plates on a rotating basis.

The branded stations are part of a concerted effort by Northwest ISD and Aramark to entice the teenage customer base to get healthful midday meals.

“Over the past five or six years we’ve been looking at innovative ways we might grow with the district and be a vested partner with them,” explains Aramark Regional Marketing Director Rick Ward. “At the same time, students are very savvy. They know what’s going on in the marketplace, so when it comes to lunch, they want to see things similar to what they experience on the outside.”

Instead of trying to fight that, Aramark has decided to use it to entice students to get healthy lunches.

“We developed every one of our concepts to mimic national brands,” Ward explains. “For example, our Green Street Deli and Rock Hill Burrito mimic Subway and Chipotle but adapted to meet portion sizes in a school environment along with great looking graphics to make a very appealing environment.”

That commercial-style appeal has now been boosted with the addition of the highly popular Red Mango brand.

“In certain locations where it makes sense we do partner with national franchise retail companies like Red Mango, which we’ve traditionally done business with in our other lines like higher education and sports/entertainment,” Ward explains. “With Northwest venturing off of the National School Lunch Program (NSLP) [the district removed its high schools from NSLP participation beginning with the 2014-2015 school year], this was an opportunity where they came to us and said, ‘Look, we’d like to try something really cool and out there, but we want to maintain healthy, nutritious, great options [for] our students that they are familiar with. So I connected through our sister lines of business with our contacts at Red Mango and then began conversations about a year ago. This has been a long process to make sure we have the exact right fit for Northwest ISD.”

The menu is a limited version of the chain’s full commercial menu, and Aramark is experimenting with the mix. Among the offerings at the start of the school year were packaged salads, a few yogurt flavors and a scaled down topping bar emphasizing healthier items like raspberries and bananas.

The purchase of full meals rather than scattered á la carte selections is encouraged at all stations.

“We want them to eat meals so every line is priced accordingly,” Ward says. “We bundle and combo in different ways and every line has a meal available. Even Red Mango has a great salad selection and various healthy, fresh deli sandwiches. So kids can get those with maybe a bottle of water or a small yogurt [which is the only portion size available].”

Red Mango was the most prominent addition to the meal program at Northwest ISD for 2015-2016 but other changes include a concerted effort to add more fresh options on all lines, such as freshly made salsas and pico de gallo on the Mexican food line.

The branded stations generally combine a set of standard selections available every day—cheese pizza, for example—with a cycle menu of specials. The exception is the Home Zone entrée station, which can be a pasta station one day and serving meatloaf and mashed potatoes the next.

Many of the stations emphasize made to order, which can be problematic in a K-12 environment given the constricted lunch period time windows. Ward says the key is to train employees, many of whom have worked in school foodservice for a long time and are used to the traditional serving line model, to adapt to producing made-to-order selections quickly.

“Take the deli line,” Ward says. “We try to do it like they do at Subway, with orders passed down the line quickly.”

He says there are two numbers he emphasizes in training employees for this mode of service: 22, which is the average time a student has to get and eat a meal in a typical school lunch setting, and 21, which is the number of days it typically takes to make a habit, per “7 Habits of Highly Effective People” author and business consultant Stephen Covey.

“So we ask them to live this, work this and give this your very best for 21 days and I’m telling you, I’ve done enough of these trainings, nine times out of 10 they hit home runs and it starts to work. And then when they see that the kids are happy, it make a big difference in their lives.”

The high school meal program at Northwest ISD gets the most attention because of its brand emphasis, but the district and Aramark hardly slight the lower grades, though in these venues the meal program must conform to NSLP standards.

In the middle schools, Aramark has scaled the made-to-order concepts down with fewer choices but also added variety by breaking up the traditional serving line.

Ward explains: “Traditionally, kids walk in and see two lines, both with the same items. We’re working to break these lines up so that, for example, we have deli sandwiches and grill on one side and entrées and salads on the other side. So you break it up and give them more choices in the same space through effective merchandising and line positioning.”

Complying with NSLP regs did present challenges at the middle schools last year as popular branded items that had previously been available, such as Red Baron pizza and Chick-fil-A chicken sandwiches, were no longer compliant, so alternatives had to be found.

Aramark worked with suppliers to develop alternatives that met the new regulations, including a whole-muscle chicken patty (as well as nugget and strip versions) that “is about as close as you can get to Chick-fil-A” in a school meal program, Ward says, though the brand name obviously cannot be used.

The new pizza offering, with the required whole-grain crust, “is starting to work out really well,” Ward says. “It took a little getting used to,” he admits, “but it’s doing well now. A lot of it is how you prep and put it out, and are you just doing cheese and pepperoni, or are you trying different kinds that you can make within the guidelines?”
New entrée formulations are tested through Aramark’s Fuel Promotions program, which features two new selections available for a full week each month from October through May at the middle and high schools.

“These are twists on traditional favorites,” Ward explains. “For example, our most popular item this past year in Fuel was the Crispy Sriracha Burger [a burger topped with a special salsa, crispy (baked) onion strips, Sriracha sauce and low-fat mayo]. Kids went crazy for this burger!”

Ward says the intent is to break the monotony, drive participation among those not usually inclined to buy lunch at school, get kids to try different things and generally create some excitement.

A concerted effort has also been made to increase variety at the elementaries, though there the effort must deal with limitations imposed by what equipment is available. Generally, a day’s menu includes a traditional favorite such as a chicken nugget, cheeseburger or pizza, plus a homestyle type entrée (lasagna, spaghetti, chef salad, etc.) along with a deli type item and a vegetarian selection.

A healthy meal promotion called Taste It Tuesday pushes a new item for kids to try weekly. One week it may be cut-up samples of papaya and another it could be a fresh smoothie demonstration served in 2-ounce portions.

The district also rolled out fruit and veggie carts a year ago at all elementaries where kids can get as much of the fresh produce they want.

“It’s a big deal for these kids. They get really excited and pumped up about lunch,” Ward says.

Which, of course, is half the battle.

Why Douglas County Pulled Its High Schools Out of NSLP
Aug 14, 2014