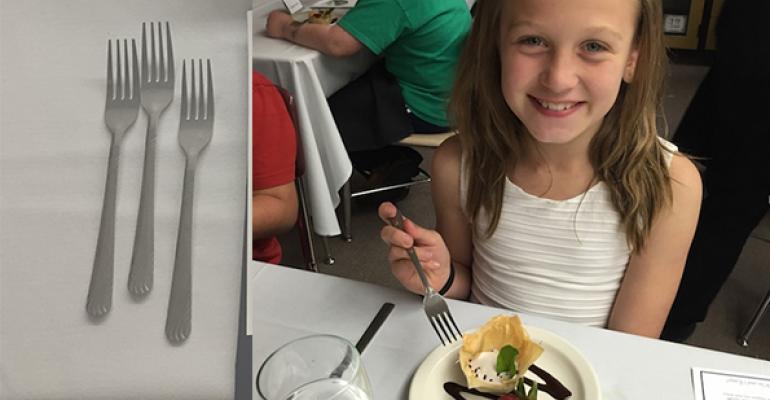 A four-course lunch with silverware, glassware and china was the reward for good lunchtime behavior at Woodland Primary School.

Tea voices were on display, as were lack of elbows on the table and general best behavior when Ms. Groen’s third-grade class sat down to lunch April 24 at Woodland Primary School, in Washington. That’s because this wasn’t a typical school lunch. For one thing, it was held in the classroom, not the cafeteria. For another, it featured four courses served on tables covered with white tablecloths and set with china, silverware, glassware and linen napkins.

The Fine Dine lunch was a reward for the class for good lunchroom behavior—keeping the noise down, being neat and cleaning up afterward.

The menu featured Italian wedding soup, lasagna, fruit salad with honey vanilla mascarpone and a chocolate mousse cup with fresh berries. It was developed by Lan Ha, the district’s nutrition services director with Sodexo, in consultation with a Sodexo chef.

Ha says she had put on similar events before in other districts and drew on her experience, combining the familiar with some more unusual dishes. “The soup was challenging because kids don’t eat a lot of soups other than chicken noodle or tomato, but I thought the whole Italian theme fit pretty well,” she says.

“We do make lasagna every once in a while,” Ha explains, “but we took the opportunity to add a little bit more presentation and garnish to it to give the students a feeling that they’re actually in a restaurant getting a chance to practice some of the etiquette they learned.”

The lasagna was served in cups rather than as the more familiar plated square slice. “They were excited about how it looked but they weren’t sure how to eat it,” Ha says. “But they did really well, taking the approach of the table host and using their knives and forks.”

A week earlier, the kids were primed for the event with a talk on etiquette and table manners presented by Ha. It included a sample sheet showing the layout of the table settings as well as a discussion of proper table manners aided by a short video, “Mind Your Manners,” which showed common do’s and don’t’s.

Ha also talked about the menu and what to do if one is not sure about trying something. “I wanted to prepare them so that they wouldn’t be stressed or concerned about a new item,” she explains.

“For example, how many kids have ever had Italian wedding soup?” she continues. “I asked them and only one or two hands went up. So I told them, ‘Well, you can try it, which I strongly recommend as it may be something you like and you’ll never know if you don’t try it. If you try something and find you don’t like it, it’s OK. Just put your spoon this way. You don’t have to finish it.’ Kind of showing them what you should do if you were going out to eat.”

About three-fourths of the kids ended up liking and eating the soup. Ha says that afterward she asked for a show of hands of those who tried something new during the meal. “Almost all the hands went up,” she says. Then she asked those with hands raised to keep them raised if they liked the new thing they tried and almost all hands stayed up.

Woodland participates in the National School Lunch Program and is subject to its requirements, but Fine Dine was classified as a special event. The meal mostly used ingredients already on hand, plus a few specialty items such as mascarpone, orzo and most of what went into the dessert. It was prepared by the foodservice staff, which also helped to serve the students along with some parent volunteers.

“The kids were really excited for the opportunity,” says Megan Groen, the teacher whose 23-student class participated in the event. “It was very memorable for them and after the event several parents contacted me saying that over the weekend they were telling their families how to have proper etiquette and how to behave at the table.”

Ha says the event is likely to be repeated with other classes in the future.