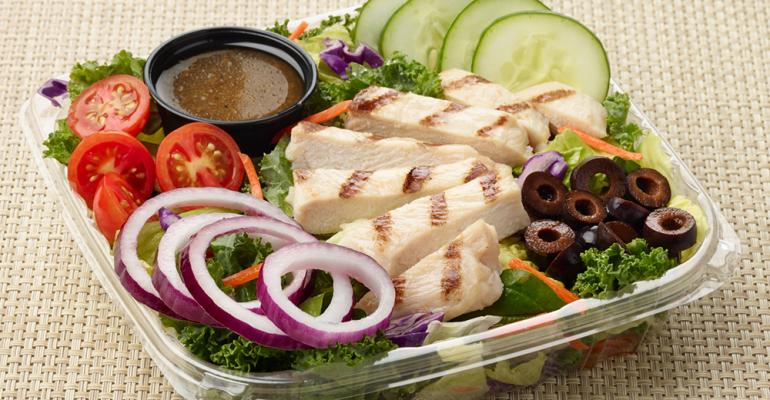 Bringing the strategies he learned in California districts to Virginia, Rodney Taylor is on a mission to transform the nation’s 10th largest school district.

When Rodney Taylor got the call to work at Fairfax County Public Schools, he jumped at the chance. He wanted to prove that the programs he had instituted in smaller districts in California, such as salad bars, could work in the 10th largest district in the country.

“I wanted to demonstrate that it could be done in one of the largest so that I could dispel all the naysayers,” says Taylor, who became the director of food and nutrition services at Fairfax County Public Schools in 2015. The district has more than 186,000 students, with just over 28 percent eligible for free and reduced meals. Before coming to Fairfax, Taylor worked at Santa Monica-Malibu Unified School District and the Riverside Unified School District, both in California. It was in Santa Monica that he established the farmers’ market salad bar and his “salad bar first” philosophy, which means, “every child goes through the salad bar where there's an adult on each side that engages, encourages kids to eat the colors,” he says. “The more colorful your plate, the more healthy the food is. We take the focus off the center of the plate, be it hamburgers or hot dogs or pizza, and we put it on more fresh fruits and vegetables.” Taylor has begun bringing salad bars into Fairfax elementary schools, and plans to install 17 more this year.

In Riverside, he started the Signature Line where he developed a line of sandwiches and salads that rival the options available at fast casual restaurants like Panera Bread. The program began as a line geared toward adults, because, as Taylor says, "Our worst critics are teachers, and rightfully so. We've asked them to eat kid food and pay adult prices.” Adults working in the Fairfax school system can now place an order by 8 a.m. to have a meal delivered to their site at 11:30 a.m. the same day.

While working in Riverside, Taylor also saw that salad bars weren't being utilized by many middle and high school students, so he reimagined the Signature Line for the upper classmen and named it Fresh Express. Taylor has instituted both programs in Fairfax. Both the salad bars and sandwich and salad lines feature locally grown products. Taylor began these programs in California, where seasonally produce is abundant, but bringing them to Virginia, with its shorter growing season and less farmland, was another story. If there’s less variety in the salad bar, though, that’s OK with Taylor. “We're teaching kids about the growing season,” he says. “We're going to teach the children about the land where their food comes from.”

What Taylor has found in abundance in Virginia is poultry. Taylor is planning on installing rotisserie ovens in all of the district's high schools (he's installed one so far), and he will be buying chickens from Virginia. He’s also speaking to local pork farmers and beef producers, too. The district has also begun outdoor barbecues, which are popular with students and staff, he says. “We want to smell up the school with the smell of fresh food. We want to visually have you see your food, [and know] that it's not mystery meat.”

It’s initiatives like salad bars, Fresh Express and barbecue days that have changed the perception of dining services, says Taylor. It’s helped that Taylor promotes these dining services to students and staff. One of his marketing initiatives was commissioning professional photos of the Fresh Express line. The photos entice diners and “puts pressure on my staff to make sure that the food looks the way it does in the picture,” he says.

Taylor’s efforts have also helped turn the school around financially. “I have been advocating for years that we have to stop running nutrition programs in our public schools like they were entitlement programs,” he says. “I think we need to run our nutrition programs like they're a business.”

At Fairfax, “we'd had a few years where we struggled financially, and we reversed that in the first year,” he says. “I have every expectation that we'll continue to grow our program, grow our revenue and put in healthier food in our schools.” Taylor has already encouraged more students and staff to purchase meals. Now he plans to create more robust summer, supper and senior programs.

“What I hope to do in my work is to demonstrate that you can have a healthy bottom line and healthy children and that we have an obligation to ensure that all children have access to nutritious and healthy meals," Taylor says.

It’s a personal mission for Taylor who grew up in what he calls an at-risk family. “I know first-hand the indignity of being hungry,” he says. “No kid, not on my watch, not in my school district—no child will know that indignity.”

One On One: Seattle Public Schools builds menus tailored to students and the learning experience
Apr 30, 2021

FM On Demand: Why getting in touch with your feelings should top K-12 food service pros’ to-do list
Apr 30, 2021