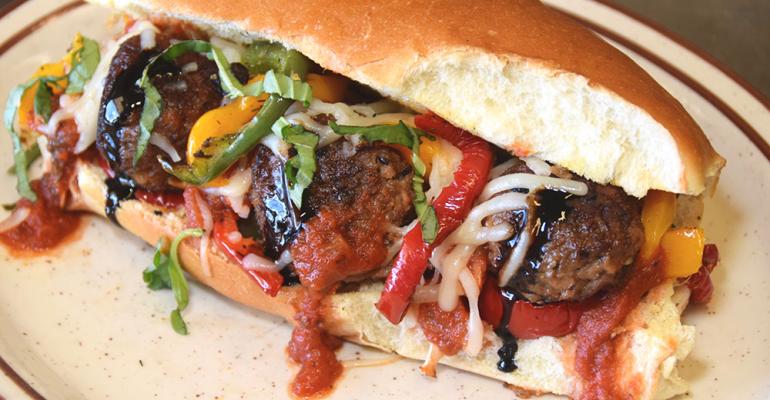 Santa Barbara USD
Vegan selections like this “meatball” sandwich are offered daily as a meatless alternative to the standard entrée of the day in Santa Barbara school cafeterias.
News & Trends>K-12 Schools

Santa Barbara USD has been menuing meatless alternative proteins and has found a majority of kids take them.

At the Santa Barbara USD (SBUSD) in California, meatless proteins from vendor Hungry Planet are a regular alternative on the daily lunch menus and “more than 60 percent of the students reach for them,” reports Nancy Weiss, director of foodservice for the district.

Why? “Because it’s undeniably yummy,” she quips. Promoting meatless choices was already a staple of Weiss’ program even before she discovered Hungry Planet products. In fact, that was the source of the original connection.

“One of the [Hungry Planet] co-founders, Jody Boyman, approached me because she was a parent volunteer at one of my larger high schools and was helping us serve lunch because her kids go to that school,” recalls Weiss. “She said, ‘I really like what you’re doing with the foodservice and I think I have a product you might be interested in, because at that point in time we were [already] menuing a lot of vegetarian, plant-based items.”

Made from 100-percent non-GMO soy and available in a variety of flavors such as chicken and beef, the vegan products have found favor with SBUSD students, being served in dishes such as a crispy “chicken” burger, hamburgers, “beefy” nachos, “beef” tostada, Italian meatballs, meatball subs, and spaghetti and meatballs. Santa Barbara USD Foodservice Director Nancy Weiss with one of the district’s Mobile Café food trucks used in catering and to serve school meals at district and client sites.

SBUSD has about 14,500 students with a free/reduced percentage of about 50 percent, so the district participates in the National School Lunch Program and must abide by its regulations. The Hungry Planet products fit the federal meal pattern mandate, with 2.5-ounce portions satisfying the meat/meat alternate requirement.

“Fiscally, it’s a stretch,” Weiss admits, “but one that we feel is as important as not using Styrofoam in our department. The year I became the director we eliminated Styrofoam and have been building a scratch-cooked reputation for the last 10 years. Because of that, I think parents and the community trust the foodservice program [and] our participation is pretty good.”

All SBUSD meal program food is scratch-made in 11 production kitchens and satellited to 26 district sites as well as a number of outside clients such as private schools and small public districts, using SBUSD’s own Mobile Café branded food trucks. And, yes, the outside clients also receive dishes made with Hungry Planet vegan proteins.

The trucks have on-board production capability such as flat-top grills but because of the time constraints of school day schedules, most of what is served at school sites during lunch is pre-packaged for quick service, though at some secondary school sites there is some onsite cooking.

The outside contracts as well as a strong catering program that operates both inside and outside the district, including some social catering, help fiscally support SBUDS’s meal program.

“Anything to make a dollar!” Weiss laughs.

In addition to breakfast and lunch, SBUDS is building its supper program and already manages a “robust” summer feeding program. “In order to make everything fiscally sound, we need to reach as many different venues and customer services as possible,” Weiss says.

Weiss comes by her commercial mindset from a strong restaurant background. She founded the still-in-business Santa Barbara landmark Soho Restaurant & Music Club in 1986 after graduating from the University of California-Santa Barbara. She operated that venue for over 20 years before joining SBUSD and becoming director of foodservice in 2007.

“I landed in a really good second career,” she now says. “This could not have been better for me. I had all my contacts from the [local] farming community that I was using back then, even before farm to table became a catchphrase. So when I got this job it was very easy to introduce farmers to the school district and start getting organic produce for good prices because these guys were looking for a sound investor in their crops.”

The relationships are win-win, she stresses.

“They know exactly what I’m going to use a year in advance and they know their income is guaranteed, so we get really good pricing on local produce.”

That and the Hungry Planet vegan proteins, plus the scratch production, make SBUSD’s regular school menu both very healthy and very green.

“I think we’re making a very eco-friendly statement to support the environment as well as our kids’ health,” she says proudly.