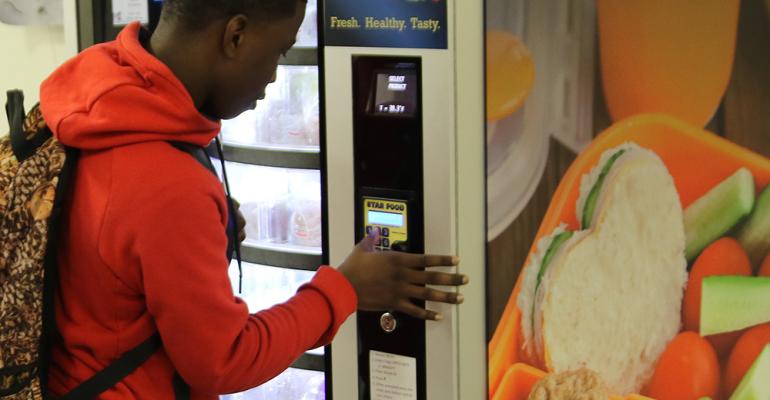 Middletown High School operates units in the morning and sees up to half of meal sales in that time period come from the automated units.

Like many K-12 districts, the Enlarged City School District of Middletown in upstate New York has struggled with breakfast sales, so earlier this spring it installed four vending machines at its high school that dispense fully reimbursable breakfasts. Since that time, the school has seen about a 50 percent increase in morning sales as students line up to get one of the four specially designed menu choices only available in the machines, which were secured from vendor Star Vending.

The units, which cost about $13,000 apiece, were paid for with a grant the district won from the American Association of School Administrators. Middletown is a Community Eligibility Provision (CEP) district that lets all students receive a free breakfast, and the vending machines are designed to make it as convenient—and trendy—as possible to get a morning meal at the high school, traditionally the most difficult demographic to persuade to get a meal at school. The machines operate between 6 a.m. and 8:30 a.m. on school days.

What they offer is a bit different from what students can get in the traditional cafeteria, which remains open for breakfast as well.

There are four options: yogurt parfaits, an Uncrustable PB&J sandwich, campus-made muffins and cereal or Benefit bars. The machines each hold 96 selections representing all four options, and any restocking takes place during a period change at 7:40 a.m.

While CEP technically makes cash sales irrelevant, the POS system in the machines is linked to student accounts to prevent anyone from getting more than one breakfast a day. Any student that want a second meal has to go to the cafeteria and pay cash for it at the checkout.

The machines were introduced in a soft opening and kickoff party on April 11 and went fully live the next day. However, for about a week before the rollout the machines were already on the premises to be tested and integrated into the POS system.

“The [machine] lights were on and students each day kept asking ‘Is today the day?’ so there was a lot of momentum built up to the soft opening on the 11th and we were full steam ahead on the 12th,” recalls Debra Donleavy, food & nutrition services director for the district. “We had great participation right from the beginning.”

The high school has an enrollment of around 2,100 and has seen breakfast counts of around 600, of which nearly half now come out of the machines.

One impact of the increased breakfast participation at the high school has been expanded hours for some of the crew at the high school’s prep kitchen, where the parfaits are made and the muffins baked. It is only about a hundred feet from the machines, making stocking easier. The units are fully stocked each afternoon so they are ready for the next morning’s breakfast rush, something made possible by the fact that they have refrigeration capability. Also, the arrangement of individual items inside each machine is such that older items are always dispensed before ones that were inserted more recently, maintaining FIFO (First In, First Out) integrity.

The machines currently are used only for breakfasts and are not used at lunchtime. However, the district is looking to secure authorization to use them to dispense supper meals at some point.

Also being contemplated is expansion of the program to district middle schools.

“We feel the vending machines are a good solution for our very social and very motivated older students,” Donleavy says. “Because of their schedules, they don’t always have the same first class, so this is a good opportunity for those students who have a restricted classroom like a gymnasium or a music room to get their meal after that class.”