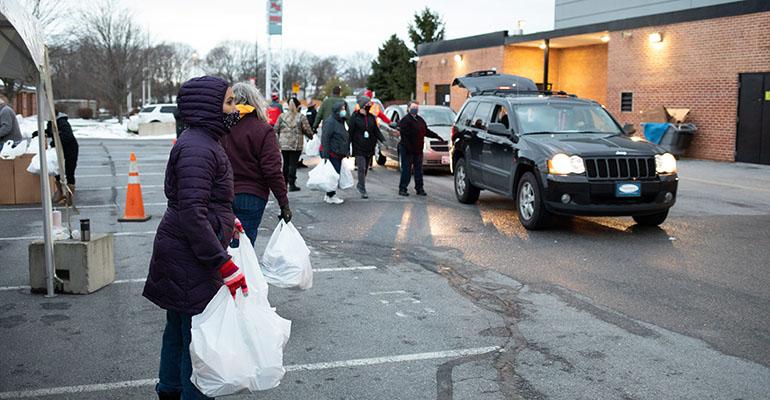 When demand for meal kits skyrocketed, one Maryland district rose to the occasion

When Washington County Public Schools opened up online ordering for free winter break meal kits for kids under 18, they ended up having to suspend the system just 12 hours later. Within half a day, the Maryland-based district was flooded with three times the number of orders they had expected. And they had to quickly come up with a plan to fulfill the orders that were already in.

“Based on our current numbers, we thought 1,000 orders was even stretching it. So when my team said we received 3,000 orders in 12 hours, I thought they were messing with me. I was like, that’s not feasible,” says Michael Embly, WCPS Food & Nutrition Services supervisor.

Embly had no idea how his team would meet the astoundingly high demand. Each meal kit was supposed to provide a child with five days’ worth of breakfasts, lunches and dinners—everything from cereal kits and muffins, to grilled cheese and veggies, to Korean barbecue chicken fried rice, lasagna, and maple chicken poppers with biscuits. At 3,000 orders, Food & Nutrition Services was faced with the task of having to procure ingredients for, prepare, pack and distribute 52,000 meals. And they only had two weeks to figure out how to make it happen.

The issue wasn’t just ordering more food from their vendor on short notice. “We realized the infrastructure we have within the county couldn’t handle this,” Embly explains. But once word of the situation got out, Embly quickly started receiving offers for help. Local companies Dot Foods and Hoffman Transport donated refrigerated trailers. Private donors gave money that Embly put toward packaging. (Food and labor costs were reimbursed by USDA.) District bus drivers and custodial staff, who were being paid to perform other tasks while the WCPS was doing remote learning, were diverted to help move food into the trucks. “It was a whole assembly line process at that point, all while trying to maintain social distancing and keep everyone healthy,” Embly says.

Then the weather took a turn. “We were doing full-on production on Monday December 14, figuring we needed a good five days. Then we saw a snowstorm was going to hit us on Wednesday and shut us down,” says Embly. Knowing they had to wrap up before the storm, the team set up second production shifts for Monday and Tuesday evenings. Right as the snow started falling, a fresh team came back at 4 a.m. on Wednesday to load the last of the kits onto the truck. “It was a huge victory,” Embly says. “We ended up getting around 10 inches. Running all that product from the kitchen to the trucks would have been a safety nightmare.”

Soon it was time to distribute the kits. Thankfully, getting the meals to children and their families proved much smoother than the production process had been. WCPS had established just two pickup sites, and local police helped keep traffic flowing. “It was a drive up and go set-up. Even the principals were able to come out and help load,” says Embly.

As planning for the kits was underway in the fall, Embly and his team knew there’d be a fairly big need. Just over half of WCPS students qualified for free or reduced lunch before the pandemic—and after March, the number of families in need only grew. While he never would have predicted such a high demand, he believes it speaks to just how many families are struggling right now. “We think it goes to show what the needs are. They’re greater than what anyone even imagined,” he says. In addition to delivering on the 3,000 kits that families had ordered, Food & Nutrition Services even found a way to provide 500 additional kits to the local Boys & Girls Club and YMCA.

Though he describes the situation as a “logistical nightmare,” in the end, it was worth it. “Everybody worked together to achieve a common goal and it was great to see,” Embly says. Most important, he could rest assured knowing Food & Nutrition Services had done everything that it could to help families through a challenging time. “Whether it’s in or out of school, we still have that role to play with our kids needing nutrition,” Embly says. “You have no idea what folks are going through, so it was just important for us to fulfill the need.”