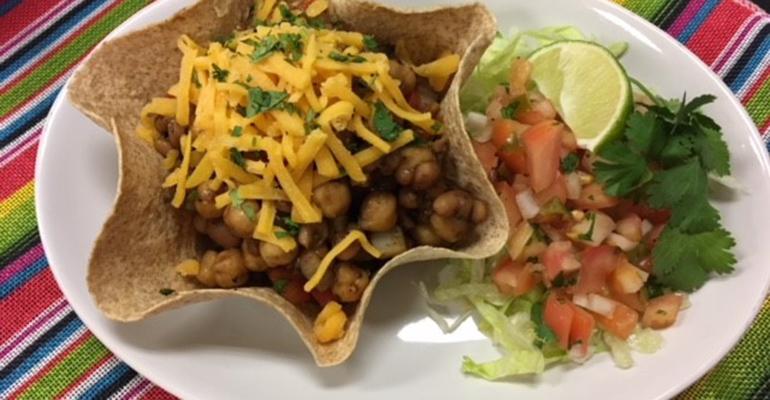 A black bean burrito bowl in a toasted tortilla shell is "a big hit" among the Tex-Mex dishes.
News & Trends>K-12 Schools

Meatless Monday gradually made its way onto the calendar at Whitsons Culinary Group, starting about a year ago, with chefs experimenting here and there while gathering feedback from students. This month, Meatless Monday has officially kicked into high gear, with new meatless items making the scene at 95 school districts managed by Whitsons in a huge rollout.

“In our corporate office, we’ve embraced it as a company,” says Whitsons Chief Operating Officer Kelly Friend. “So, we decided to make it a full-blown, formal launch and really support it and get the Meatless Monday team behind us because we know they have great resources.”

Those resources include recipe ideas—which Whitsons chefs tinkered with—and information on the positive effects of going meatless just one day a week. Whitsons sent signage to all the schools with facts like, “Did you know it takes 425 gallons of water to make ONE beef burger? Cows, the food they eat and the land they live on need a LOT of water.”

Plant-based menu items are something students in Whitsons’ K-12 accounts are definitely interested in, Friend and the culinary team found out through recent surveys. This initial spark of interest can lead to changes for a lifetime, says Cherry Dumaual, partnerships director at The Monday Campaigns.

“We hope the implementation of Meatless Monday in schools with Whitsons dining services will inspire students to start each week taking small steps that can instill healthy habits for life,” Dumaual says.

Friend says she expected students in the older grades and high school level to be receptive to Meatless Monday, but was pleasantly surprised that the younger students are into it, too.

“We did have a couple parents who were concerned and said, ‘My kids won’t eat anything but chicken nuggets.’ And I got most of those calls! I told them, ‘It would be wonderful to introduce this to your child. We’re not pushing you to be a vegetarian or vegan…we’re not trying to be a cult. It’s not that meat is bad, it’s just that you can make delicious meals without it.’”

And incentives like stickers for doing taste tests has been working well in elementary schools, Friend adds, describing a veggie burger tasting where staff never pointed out that the burgers were meatless, just offered them and the kids enjoyed them.

Training for staff on Meatless Monday has been integrated into Whitson’s online employee handbook, “because we want everyone to have ownership of this,” Friend says. “If you started your job yesterday, you could embrace Meatless Monday and start it today.” The first Meatless Monday menu item introduced was a vegetarian burrito, the first of several Tex-Mex menu items that work especially well thanks to the prominence of beans in that cuisine.

“Beans are such a great protein and they’re naturally in a lot of Tex-Mex dishes, so we said let’s try some Tex-Mex entrees,” Friend says.

A black bean burrito bowl in a toasted tortilla shell looks cool and has been a big hit where it’s been served, and a Mexican lasagna has done well, too.

But the most popular meatless item has been “the good old, classic veggie burger,” Friend says, attributing the success to the familiarity of the item to kids.

And the veggie burgers continue the step in the right direction, with grilled veggies offered as toppings.

Another great new item is acai berry bowls, “especially the older kids see these on the retail side, and they know it.” The trend-forward bowls fit the national standards for either breakfast or lunch and include different toppings like granola and coconut flakes, something that takes a bit more effort from the labor standpoint, since kids select their own toppings. It’s worth doing, though, Friend says.

“Customization is really important to the older students,” she says.

As Meatless Mondays get underway through the end of this school year and the beginning of next fall, data on food waste and student feedback will be gathered at all of the locations, Friend says, adding “We’re going to continue to place a very strong focus on coming up with creative and trendy meatless dishes.