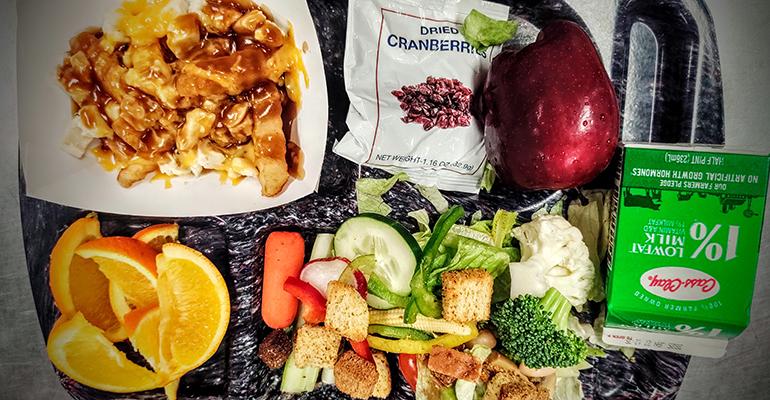 Fergus Falls (Minn.) Public Schools school meal program feeds around 2,700 students, at 38% free and reduced. This tray lunch is pre-pandemic but shows how well-rounded a meal can be. Currently the district is serving a hybrid of virtual and in-person students.
News & Trends>K-12 Schools

Depending on your district, a la carte could be limiting your program or even limiting kids in surprising ways. One food service director takes us through the journey of al a carte to the Whole Meal Deal, from the “whys” to the “hows.”

Lance Wells has never been a fan of a la carte for school meals. In his mind, there’s a link between a la carte and a two-tiered system that just leaves a bad taste in his mouth for several reasons.

“My overall issue with a la carte is no matter how it’s done, it creates a two-tiered system and encourages nutrition departments to market to kids to eat less healthy and to over-consume nutrients without the balance the other meal components provide,” says Wells, foodservice director at Fergus Falls (Minn.) Public Schools. “It distracts from making the best whole meal possible, which is actually in everyone’s best interest.”

Back in 1997, when Wells took over a different K-12 foodservice program in Othello, Wash., a self-service snack area had turned into a bloated 30-plus-choice-per-day program that resulted in food “walking away” as kids helped themselves. In addition, so much effort could have been better spent, in Wells’ opinion, into “better and more choices for complete meals in what we called the Whole Meal Deal,” he says.

When Wells started as director at Fergus two years ago, he noted a newish (eight years old) renovation at the high school which looked like a food court, but served “old school, one student at a time,” he says. One area was doing it better, though: a la carte.

“In a la carte, the ‘haves’ had treats, beverages and entrees that were being subsidized by the traditional meal program,” Wells says. “We were competing against ourselves. We were chasing our tails and spending so much time selling two and three entrees to the kids with money, so we didn’t have time to grow the Whole Meal Deal.”

After a year of observation and building trust with his team, Wells proposed his idea to eliminate a la carte, backed up with hard scientific data he’d gathered into a presentation, which was well received and approved by all necessary stakeholders.

“I did the math for my presentation and knew that after the loss of a la carte entrees and the loss of revenue by not offering a la carte snacks to 5th and 6th graders, as well as making our own pizza, we determined we would not be worse off,” Wells says.

At first, some students weren’t sure about the change, Wells says, but the rebranded Full Meal Deal with more customization and more choices on the main lines have made things better. “In one fell swoop we improved the nutritional content of every meal and eliminated the two-tier system. We replaced what they had with something much better.”

And despite school buildings being near to “every fast-food company” Wells adds, participation increased with the Full Meal Deal. “We saw the Whole Meal Deal double within a couple of weeks of the rebrand [last year]. “As it turns out, our participation and revenue far exceeded our forecast.”

Entrees have included kickin’ chicken bowls, Italian subs, meatball and mashed potatoes, chicken sandwiches, tacos, nachos, cowboy pizza and many more. Each entrée comes with a choice of canned fruit, a commodity fruit cup, raisins and “every kind of veggie we can squeeze in,” Wells says.

Due to the pandemic, this semester at Fergus started with grades K-6 attending in person every day and grades 7-12 in a hybrid of virtual and in-person classes. An off-campus meal program providing bulk meals to distance learners has been filling in the gaps. There’s also a temporary meal program for families in quarantine.