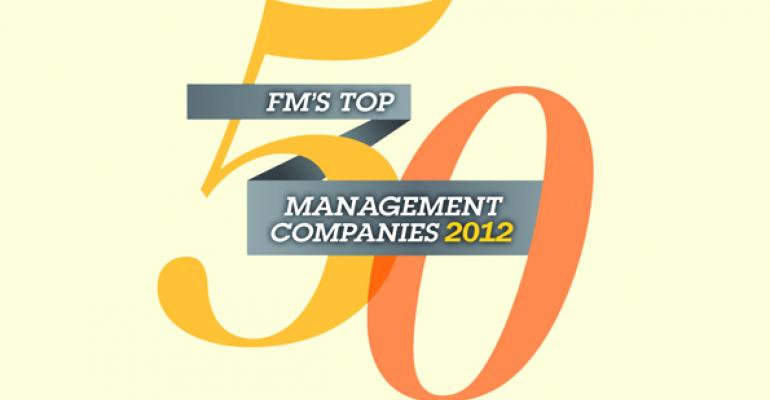 There were some big gainers in the 2012 Top 50 despite a slow economy, as well as market niches where contractors found room to grow.

[FM Web Exclusive]While the broad economy continued to sputter over the past year, the firms on Food Management’s 2012 Top 50 Contract Management Companies list demonstrated a continued ability to grow. Together, the 50 companies cumulatively grew by over $2 billion. They were led by #1 Compass Group, which accounted for about half that total by itself. Other big gainers included #2 Aramark ($414 million), #4 Delaware North ($300 million) and #9 Trusthouse Services Group ($116 million).

In percentage terms, the top gainers were Trusthouse (93.5%), #10 Healthcare Services Group (31.5%), #19 Unidine and #24 Southwest Foodservice Excellence (23% each), #30 Continental Dining (21%) and #27 Cura (20%). Notably, all but one (Continental) of these companies operates predominantly in institutional segments like schools, corrections and senior dining where public funding and/or policy changes have squeezed resources and made outsourcing auxiliary services like dining more attractive.

Eighteen of the companies on the Top 50 can be classified as exclusively or predominantly serving a single segment while the rest are diversified over two or more. Looking at which segment has the largest share of each company’s current business even if it is diversified, we find that 15 list B&I as their top revenue generator, followed by Healthcare with 11 (this includes both hospital and senior dining business), K-12 Schools with 10 and College/University and Entertainment/Sports with six each. One lists Government and one lists the Military as their top revenue generators.

The emphasis on K-12 Schools is particularly notable because, despite (or perhaps more accurately, due to) the notorious challenges presented to this segment by tight cost parameters, ever more strict government regulations and political pressures from parents, unions and nutrition activists, it also provides opportunities for professional management providers who can deal with these constraints in a cost-effective way while maintaining an acceptable level of quality and service.

Indeed, anecdotal evidence suggests that the contract sector recognizes the K-12 foodservice market, which is currently largely self-operated, as a prime growth opportunity going forward. To that end, companies looking to penetrate or increase market presence in this segment are developing programs that can satisfy the need for kid-friendly meal choices in an economical way while providing value-added extra services like nutrition education, farm-to-school programs and parent/community engagement.

Among Top 50 companies with significant operations in the school market are the “Big Three” of Compass, Aramark and Sodexo, though none realizes more than an eighth of its total business in this segment. Further down the Top 50 list we find a series of school market specialists such as Whitsons (#18), Taher, (#21), Nutrition Group (#23), Southwest Foodservice Excellence (#24), Pomptonian (#33), Opaa (#34), Revolution Foods (#39) and Quest (#46).

Most of these have carved out regional niches, sometimes encompassing only a single state (e.g., Pomptonian in New Jersey). The advantages include being familiar with local or state laws affecting school meal programs and making a plausible claim to being locally based or “part of the community,” a potentially significant factor many school boards that make outsource decisions.

You can read about a number of other management company program trends at this story: "Top Trends in Managed Services."