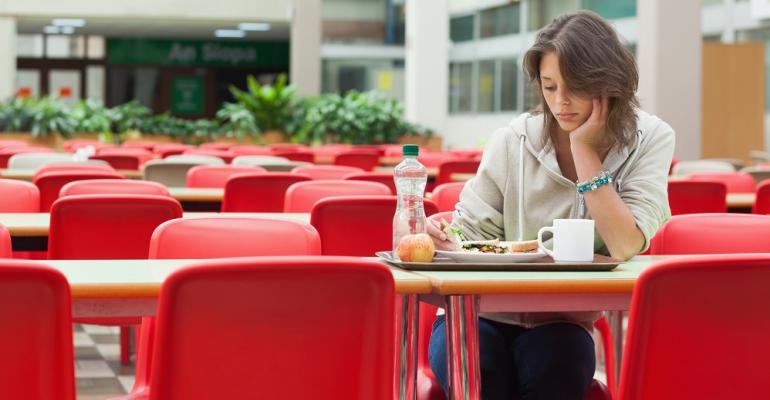 Wavebreakmedia Ltd/Thinkstock
Participating students can receive up to 15 meals per academic year.
Operations>Management

With a student’s help, the University of New Hampshire fights food insecurity

The University of New Hampshire (UNH) is the latest in a growing number of colleges addressing student food insecurity, and at this school, senior Alana Davidson is leading the way.

As Davidson sees it, there’s a rethinking happening around the romanticized image of students struggling and living off one meal of ramen a day. More students get into college than in years past, but tuitions are increasing and financial aid often doesn’t cover the extras like meals.

"Food is the first thing to get cut from [students’] budget, because you can go a day without eating, but you can't really go a day without paying for your bills, or gas to get to work or whatever it may be," says Davidson. She hopes that students in need will seek help through one of the programs she’s helped institute, including a meal swipe donation program. Davidson, a nutrition and dietetics major, first saw food insecurity during an internship at Connecticut Mental Health Center where she worked with people on public assistance. When she had an opportunity to do an independent research project on any topic of college health, she wanted to see how many of her classmates were suffering.

Using the same survey as the USDA, she discovered that the food insecurity rate was higher with students than in the state’s population overall—12 percent of students were food insecure, compared to only 10 percent of people in the state. When she performed a larger survey with the help of her advisor, the percentage of food insecure students rose to nearly 25 percent. The results, says Davidson, were “shocking.”

When Davidson presented her findings to school administrators, they felt the same way.

“I didn't really understand there was a problem,” recalls David J. May, associate vice president of business affairs at UNH. “So this was a real eye-opener for us.”

The schools started a task force to combat the issue of food insecurity on campus, with Davidson as a member.

Davidson started by working with the school’s farm to have produce donated to the school pantry and by working with dining services to donate food as well. Then she got to work researching what other schools were doing to curb food insecurity.

She brought her findings to the task force, along with data on why the issue should be important to the university. She also pitched Swipe it Forward, a virtual food bank that allows anyone, including faculty, staff, alumni, parents and students to donate dining hall meal swipes toward students in need. Meals are added directly to a student's meal plan, and he enters the dining hall as any other student would—by scanning his finger.

“It's such a simple idea,” says Davidson. “I hope other schools will be able to easily implement it with whatever dining plans they have.”

The Swipe it Forward program, which began a few months ago, has a handful of students enrolled so far. The school caps the number of meals each student can receive at 15 per academic year, and looks at the program as a short-term solution. “We'll get you going, get you situated and then we need to look at what your long-term plan is to get yourself back on track,” says May.

The school already has 1,000 meals ready to contribute—500 were donated from the dining program and 500 from the dean of students. The school has received $4,000 from the school’s parents association and another $4,000 from faculty, staff and alumni for the meal program. Students can also donate meals from their own plans.

Now Davidson, May and the school’s administrators are focused on getting the word out to students in need.

“We have a number of staff on campus looking out for signs that students may be food insecure,” says May.

Students who want to be part of the program don’t have to file any paperwork or show proof of family income to be eligible for the program.

“We make it easy,” says May. “ We saw other schools that had extensive applications, where they had to fill out all this financial information and everything. And we didn't want it to be a burden on the students.

“I think the challenge for us is going to be for the student to come forward,” he says. “I think that's going to be the struggle for them to say, ‘Hey, I need some help.’ We're hoping to get a few wins under our belt, so we can promote it more, so students feel more comfortable to come forward.”