Things Are, and Are Not, What They Seem

As you might guess from the photograph here, I will digress a bit in my column this month.

I came across this character in the heart of New York's Times Square, just before Thanksgiving. The sign you see, declaring “Occupy Wall Street” dictums, was not the version he preferred to show. On the cardboard's other side was a much blunter, hand-scrawled message: “Need Money for Weed.” It was only when I went to take his picture that he quickly flipped the sign over to what you see here.

“If you want to take a picture, it will cost a dollar,” he said, holding out his Starbucks cup. I declined.

He was a pro, though, no question about it. You can see he's been at it for a while — note the marijuana leaf belt buckle to support the sign's weight and make it less stressful to hold. The hair styling was another nice touch. 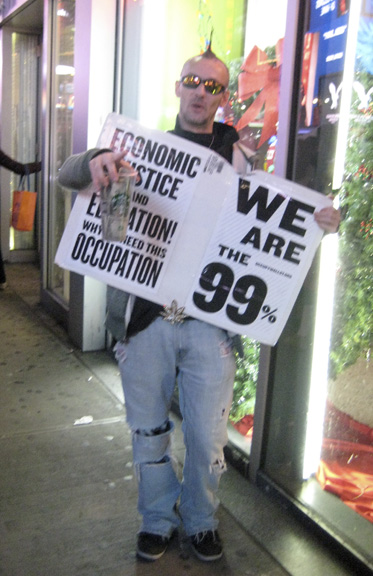 As I passed down the block, I turned a couple of times to see how his efforts were progressing and watched several young people, perhaps identifying with the “Need Money” appeal, drop dollar bills into his cup.

My take-away from this experience? Simply, that things are not always what they seem.

This fellow was a capitalist himself, taking advantage of street traffic, holiday generosity and the novelty of his personal presentation to turn a profit. The “99 percent” are not always as pure of heart as their idealists and signage might declare.

In my mind's eye, I could not help but contrast this scene to the cover of The New Yorker magazine a few weeks earlier, a caustically pointed illustration titled, “Fighting Back,” by Barry Blitt. It featured an iconic crowd of turn-of-the-century industrial magnates in top hats and tails carrying their own signs: “I've Got Mine,” I'm Good, Thanks.” and “Keep Things Precisely As They Are.”

This is not to deny that income stratification is increasing in the U.S. (the vast majority of income gains over the last decade went to that top one percent) or that the less affluent pay plenty in payroll taxes (even as Social Security and Medicare taxes clearly are not covering the costs of these programs).

Such issues do and will affect the institutions and businesses onsite operators serve. The cost of healthcare is still rising steadily faster than incomes, average investment returns and national tax revenues and will increase still more as the population ages. Or consider higher education, which also has seen relentless cost increases over the past two decades that have risen even faster than those in healthcare. While students and families have managed to afford them up to now, many fear we are approaching a point where the debt required may not be affordable or prudent for many of those students.

We are truly in a global economy today. And if, as some believe, we are entering a period of nearly universal re-adjustments to our economic (and governmental) expectations, something has to give. In such an era, it is easy to try to place the blame and cost on some other sector of society.

There is no better illustration of this failure to reach consensus than the ongoing political stalemate in Washington. We — and our Congressional representatives — all want a social contract, but seem dead set on achieving one that mostly benefits our own constituency at the expense of another.

Sometimes things are, unfortunately, exactly what they seem.