Trends in corporate life are like the ocean’s tides – they flow and ebb.  But there’s one set of trends that seem to be flowing both ways at once – employee food services.

On one hand, companies in general have been tightening the reins on their food service operations, squeezing or eliminating subsidies since the Great Recession started.  Many haven’t let up yet.  But on the other hand, there are companies going in the other direction as they embrace the “open office” concept, a rapidly growing trend in office configuration and work styles.
More companies are adopting this concept, especially as they move into new spaces.  Open offices were being planned by 77% of respondents to a 2011 survey by Teknion, a designer and manufacturer of office systems.  Some of these are coming online now.  The idea is that replacing cubicles and closed offices with more informal work spaces fosters collaboration and creativity as employees gather in formal and informal teams to plan, strategize, develop new products and pursue other initiatives.
Where does the traditional dining center fit in?  It may not, at least not everywhere.  As they convert to open offices, companies are taking varying approaches to food services to suit their particular requirements.
“These are not traditional cafeterias,” says Nina Cochrane of Restaurant Associates of new dining facilities her company has been opening.
“They’re more like a barista setup with a coffee bar and grab-and-go sandwiches, salads and snacks.”  In New York City, she says, “clients want the amenity, but not the kitchen.”
The primary users are “tech firms and hedge funds,” according to Cochrane.  “Tech firms offer free food to meet competition for skilled personnel from the likes of Google.  Hedge funds are concerned about productivity,” lost when traders leave their desks for a trip to the employee café.
Companies whose primary products are concepts and ideas have learned that an environment far less restrictive than the traditional office encourages more collaboration and productivity.  Google is the gold standard for the open, more relaxed office culture, including bountiful free food in cafes and kiosks throughout its workplaces.  Few companies can afford to match Google’s largesse,  but these types of food services require a subsidy, even if diners pay for their meals.
“A cafeteria is not cool and trendy,” Anne O’Driscoll, Senior Vice President of Building Operations for the ad agency Young & Rubicon, which recently moved into new offices at New York City’s Columbus Circle, says.  “We didn’t want to see lines of people with trays.”  The company had a traditional cafeteria at its former offices. 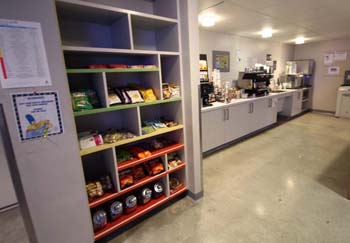 Y&R’s new Café 285 (named after its former Madison Avenue address) “offers knishes, salads, sandwiches, soups and specials, like a sushi day, ice cream day and afternoon tea,” O’Driscoll says.  “There’s also a farmers market where people can pick up fresh produce to take home.”
Y&R’s objective is “to offer a decent product at a decent price, a dollar under the local restaurants and to compete with Starbucks,.” she says.
The scaled-down café fits neatly into another increasingly important corporate imperative, encouraging wellness among employees, as well as accommodating to their greater consciousness of health and nutrition.  The days when employee café customers bought full-course hot meals for lunch are fading.  Hot meals make up only 15% to 20% of total sales in a typical office dining center, whether new-style or traditional.  The salad bar often generates the greatest percentage of sales, and desserts have nearly disappeared from menus.
In common with other companies that are adopting open offices, Y&R had another, more pragmatic purpose.  “We didn’t want to give up the footprint because of the high cost of midtown real estate,” O’Driscoll explains.  The café has a minimal kitchen and is supported from a Restaurant Associates commissary in midtown Manhattan, housed in the kitchen of the former B. Altman department store’s fabled restaurant, now the City University of New York Graduate School’s dining center.
Y&R is not alone in seeking to reduce occupancy costs by minimizing the space it occupies.  State Street Corporation, the Boston financial services firm, will reduce the average space available to employees by 36% to 108 square feet per person when it moves into its new offices next year, Boston Business Journal reports.
“It’s not about squeezing the real estate until people are touching,” Banc Windsor, State Street’s director of realty services told the Journal.  “It’s about achieving a much higher utilization and efficiency in the building.”  Some 20% of employees will not have an assigned desk.
The company, a long-term Sodexo account, will have a full-service dining center on the second floor of its 500,000 square-foot new building and four “gathering areas” on each floor above, each with a refrigerator and microwave oven for employees’ brought-from-home food, a coffee maker and possibly more.  “We’ll stock them with whatever we decide to put in,” Winsor says.
The spaces will be casual and furnished with comfortable chairs. “It’s important to have breakout areas where people can gather,” he added.  “The whole building is wired, so people can bring their laptops with them.”
In places where real estate isn’t as constricted as Manhattan and Boston, the dining center still has an important role.  On its spacious campus in San Francisco, SAP Laboratories, has three dining centers to serve its population in nine buildings.
The company attracts “a younger generation who want a different kind of food – a big salad for lunch and a snack at 4:00 p.m., says Larry Morgan, SAP’s director of corporate real estate, facilities operations and sustainability,  “There’s definitely an expectation of a higher quality, and Bon Appetit (SAP’s food service provider for the past six years) provides it.”
When SAP opened its newest building, including a staff café, last June, “we saw an increase in traffic compared to the same groups when they were in their former offices,” according to Morgan although, he added, it’s too soon to know whether participation will continue at the higher level.
“We know the open environment pushes people to dine collectively rather than back in their cubicle,” Morgan explains.
When NPR, the public radio network, opened its glittering new Washington, DC headquarters last April, employee dining was important, but not in the usual sense.  NPR operates and provides access to food for employees 24 hours a day.
“NPR has an open office with no barriers,” explains Ken McIntyre, Guckenheimer’s east coast regional vice president, who is responsible for the operation.  “There’s no employee cafeteria in the usual sense.”
There’s a compact café, including seating where informal meetings take place, but most of the service is at “micro kitchens,” stocked with light foods and snacks.  “We have a menu of 100 items,” he says, “There are about 20 different items offered each day and the program operates as a conventional cash/retail operation."
Properly designed, a staff café can be a center for working teams.  At CUNA Mutual Group, a Madison, WI company that provides insurance and financial services for credit unions, an open café at the base of a five-story atrium in the headquarters building is used regularly for informal meetings as well as offering grab-and-go breakfast items, soup, sandwiches, other light foods and beverages from a compact servery.  The café features a window wall that opens onto an outdoor patio, inviting to diners in fair weather.  It’s rarely empty during the workday.
At Dow Corning Corporation’s headquarters in Midland, MI, the café includes a series of semi-enclosed spaces with seating for six to 10, used for meetings both during lunchtime and throughout the day.
For Dow Corning, CUNA Mutual and other companies with similar facilities, these spaces reduce the demand for conference rooms; they can be used at any time, without a reservation – and the staff café benefits from extra business.
Tom MacDermott, FCSI, is President of Clarion Group, a consulting organization specializing in dining and hospitality services.
This article was revised on 10/21/13. The story originally cited SAS Institute rather than SAP and the relevant references have been changed to correct the error.
TAGS: Business & Industry Management
0 comments
Hide comments
Recommended Reading