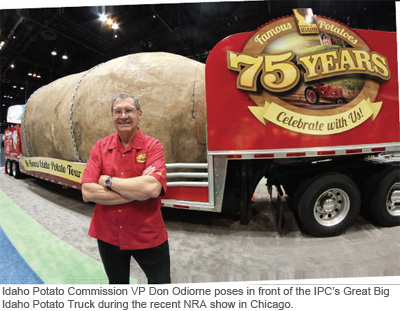 The Idaho Potato Commission’s Vice President of Foodservice Don Odiorne poses in front of the IPC’s Great Big Idaho Potato Truck during the recent National Restaurant Association show in Chicago. The IPC built the truck to celebrate its 75th Anniversary.

Weighing in at six tons, the Great Big Idaho Potato is traversing the country to greet fans and to help raise funds and awareness for the Meals On Wheels Association of America. It was the star attraction of IPC’s booth at the NRA Show, where more than 1,300 photos were taken of it.

“This is the biggest foodservice conference in the country so it made perfect sense for us to bring the world’s largest potato on wheels,” explained Odiorne.  “The IPC has been participating in this show for 25 consecutive years and we wanted to make this year, our 75th anniversary, a memorable one.”