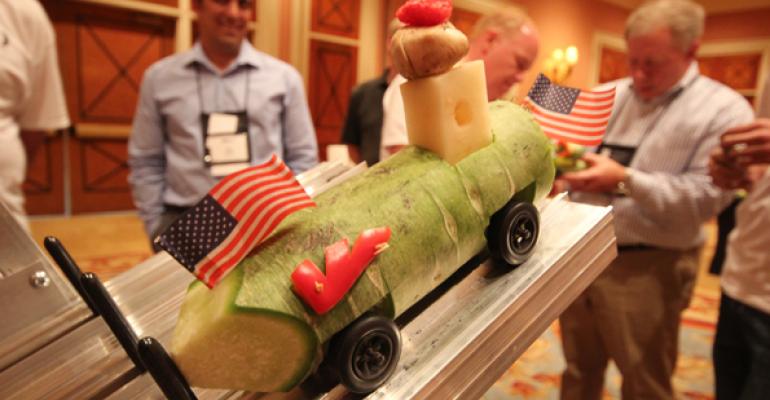 What’s the world’s fastest vegetable? SFM members give new meaning to the phrase "peel out."

In its annual initiative to raise awareness of the challenges of hunger in the U.S., SFM (Society for Foodservice Management), sponsored a novel fund raiser at its national conference—a Veggie Drag Racing competition that pitted SFM member teams against one another as they peeled, cut and carved model race cars out of whole vegetables, then raced them on a 30-foot, high-speed track.

The event raised almost $9,500 to benefit the nearby Whitney Elementary School in Las Vegas, where a high number of students are in need.

With a track borrowed from a local Boys Scouts of America troop, and with races modeled after those used in a Pinewood Derby race, SFM members designed and built a wide variety of vegetable-chassis "funny cars," racing them in team heats to determine which ones were able to reach the finish line in the shortest time.  The promotional T-shirt design that team members wore as their "uniform" was  contributed by Edgewater Marketing, whose president, Charlene Goff, also chaired the SFM Industry Advisory Board this year. 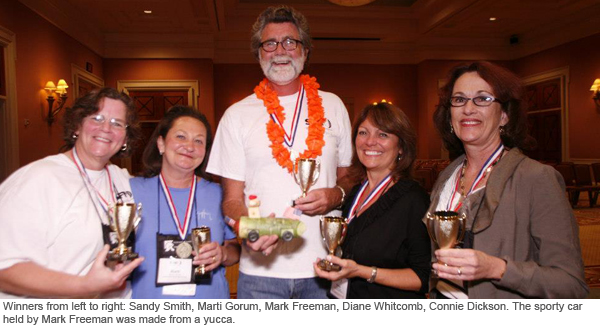 The winning entry, which shot down the 30-ft. track in under 3 seconds, used a high-mass yucca frame, sported a forward-pointing American flag fluttering from its nose and carried a small cheese and fingerling potato man in the driver's seat.

“For SFM members, food is both our life and our career, which is why hunger awareness is so central for us,” Kane says. “When we heard about Whitney Elementary School, we were truly touched by its mission and accomplishments and wanted to do something fun and unique that would benefit the students at the school.”