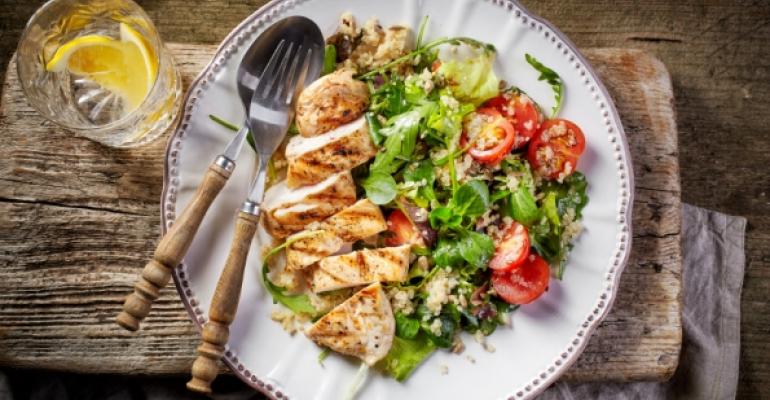 Presenting a beautiful and profitable plate

Appearance does matter. Plate presentation is more important than ever, and chefs and operators are arranging the components of the plate in a way that both looks appealing and helps boost profitability. They know that a dish's appearance is key to how satisfied the customer is with the dining experience.

In a study that polled commercial and noncommercial operators about how various proteins perform as menu items, the Tyson Menu Economics Survey — which was conducted in February by Penton Research — found that chicken remains a favorite among restaurateurs.

Not surprisingly, chicken also is a favorite protein for many American consumers, which has prompted chefs and operators to find ways to make it even more appealing on the plate.

“Today, chefs are also seen as artists so the creativity of the presentation is key,” says Andrew Freeman, president of Andrew Freeman & Co. Restaurant & Hospitality Consultants in San Francisco. “As for the profitability, the way the food is presented will ultimately impact food cost and the pricing of the dish, so portions should be measured carefully to ensure the guest sees value, but the dish also should make sense financially for the restaurant based on the pricing.”

Freeman adds that the creativity of the presentation plays into the value proposition, no matter what the restaurant's concept is. If the operation is known for large portions, the consumer expects value, so the lower cost food items may have more real estate on the plate, such as mashed potatoes arranged under the protein. “The idea of showcasing the most expensive item with a gorgeous plate and less expensive side dishes certainly adds appeal and creates that feeling of value,” Freeman says.

Chefs are indeed getting artistic with plate presentations, says Chef Shawn Culp, Culinary Academic Department Chair for The Art Institute of Pittsburgh. “One technique that’s really kind of cool is when the food is not centered, and it’s hugging the rim of the round plate,” he says. “It’s really striking and really elegant, and totally goes against the theory when I was in culinary school of everything being centered.”

Culp notes that the plate presentation places the focus on the protein. “Everything else is embellishment that enhances the protein,” he says. Good cooking techniques help, too. A well-sautéed chicken will have the appropriate color so that it looks appealing and gets the attention.

Also, the way the plate is presented at the table matters. If there is a bone in the chicken, for example, that part should be turned away from the diner, so that’s not the first thing they are cutting into,” Culp says. “You wouldn’t want them to take the chicken with a fork and knife, and turn it around on the plate so they can cut it.”

People eat with their eyes even before the plate arrives at the table. “For us the selling starts with the menu description,” says Tom Kaplan, Chief Executive of Hugo's Restaurant, with three locations in the Los Angeles area. “We have a whole committee and review process, and the executive chef and I come up with ideas months in advance.”

One popular dish at Hugo’s features organic chicken breast pan-roasted with a crispy tortilla crust on a bed of tomatillo sauce, served with a green tamale and plantains. The entrée is garnished with avocado-tomato black bean salsa, Parmesan and chopped cilantro.

“Organic chicken has been interesting for us,” Kaplan says. “It costs twice as much and we were not sure people would really want it that much, but so far it is a strong contender.”

The organic chicken sells well because the entrees are presented in a way that meets consumers’ demands for interesting, flavorful and healthful entrees. “People are interested in saving money, but I think people are more interested in health benefits,” Kaplan says.

One way to accomplish that is to offer variety in other items besides the protein. “We offer more than 10 types of sides, so while the protein choices remain consistent, guests can mix up their meal with a variety of sides each time,” says chef Rik Kiessling,  Director of Culinary Innovation at Boston Market. “The popularity of vegetables also continues to increase.”

Varying customer demographics also can present another factor that can impact the makeup of the plate. “Millennials, in particular, buy and eat differently than older generations,” Kiessling says. “They care about where their food comes from and are more open to exploring during meal time. We also see an increased demand for unique combinations and openness to international flavors which also contributes to how the center-of-the-plate is changing.”

Color and freshness also affect the presentation, but the key is to ensure that the central protein remains the highlight. At Boston’s Restaurant & Sports Bar, which is based in Dallas and has 28 locations in 23 states, the Santa Fe Salad features grilled chicken breast on fresh mixed greens tossed with Santa Fe ranch dressing and topped with black beans, tomatoes, cheddar cheese, black olives, sour cream and guacamole.

“It really packs a punch with the layers of fresh ingredients, but the chicken is the real star featuring a fresh, never frozen chicken breast,” says Brad Bevill, vice president of marketing. “It is our most popular salad among guests, accounting for 20 percent of salad sales.”

And when it comes to presentation, what might at first seem like small details really matter. “Oftentimes just upgrading your plateware to contemporary looking plates can add value to whatever you’re serving,” says Dean Small, founder and managing partner at Synergy Restaurant Consultants in Newport Beach, Calif. Also important is the way the protein is sliced. “If the chicken is properly grilled and sliced on a bias as opposed to just slicing it, you shingle it and lay it on top of grains or risotto. Then you put shaved parmesan on top, and really elevate it.”

Small agrees that appearance can contribute to profitability. “The plate presentation means everything because that’s how you perceive everything,” he says. “You eat with your eyes. If the value is strong, the elevation on the plate draws your eye in, makes it more dramatic and you are willing to pay more for it.”