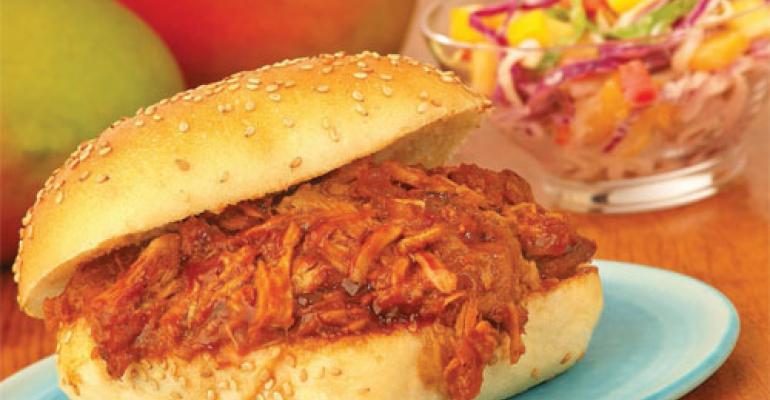 Cooked low and slow until it falls off the bone, slathered in tangy sauce, menued in many ways &#8230; pulled pork done right is perfection.

Here are seven tips for superior pulled pork: crafting the best flavor, cooking methods for foodservice, making the most of menu potential, knowing the difference between a few of the most loved barbecue sauces, and more.

During a recent afternoon Cleveland Indians baseball game, Major showed off the summer's best new menu selections featuring pulled pork (more on that later) and boasted of a smoker that can handle 400 to 500 pounds of pork shoulder in the stadium's main kitchen.

There is a reason “low and slow” is the mantra to many pit masters and foodservice operators alike, as the way to tender, fall-apart meat (pulled pork heaven): During the process, the collagen in those cuts of pork is broken down while the flavor gets better and better. Try to cook a pork shoulder in a pan and the result would be pork purgatory (tough meat that you could not pull with a fork, and without the complex flavor customers expect).

When the night shift leaves at the University of Oklahoma's kitchen, the electric smoker begins work, says Assistant Director of Foodservice Frank Henry. For 12 hours, pork is surrounded by hickory smoke at around 225°F, becoming succulent.

“When you take it out, you can pull it apart with your fingers — just as the name implies — and it…is…good,” Henry says, emphasizing the last few words.

Chefs can begin developing flavor in pulled pork before it meets the heat. Major brines pork shoulders overnight or longer.

“You've gotta brine,” Major says. “It loosens up the muscles and adds another layer of flavor.”

The brine should contain tastes that will complement the final product. For example, if Major will be making a barbecue sauce with beer to finish off the pulled pork, he will include beer in the brine. Adding a dry rub before cooking makes the pork even more flavorful, Major says.

The brown-sugar-and-paprika rub used by Robert Ginader, food service director at Susquehanna University, Selinsgrove, PA, is rubbed on a few hours before the pork is cooked.

“The rub is extremely important,” Ginader says. “It not only adds flavor, but it adds a protective crust as the meat cooks.”

Hickory wood chips are the chips of choice for smoking bone-in pork butt for the Sooner Smokehouse concept at the University of Oklahoma.

Having a smoker is great, because — in addition to being able to make pulled pork with smoky flavor in-house — by simply switching the wood chips, “you can switch up the flavor profile,” Henry says. He has used different wood chips to impart different flavors to many of the different items made in the smoker, such as brisket and sausage.

4. More than One Way to Cook a Pig

While ‘low and slow’ will always be true, it needn't always be that slow.

Some manufacturers make combi-ovens with a built-in smoker. The conditions that break down the meat are present, but thanks to the closed-in nature of the humidity, the same result can be achieved in a fraction of the time. Some “cook and hold” ovens can cook meat, then hold it for many hours without further cooking. These models might be worth looking at, especially if dishes featuring pulled pork are a staple in your operation.

At Susquehanna, Ginader uses a combi-oven with the “cook and hold” feature for pulled pork, and says that the moisture level that is maintained makes pork super tender.

“Moisture in the product is critical,” Ginader says. “When you overcook pork, it can dry out.”

5. The Secret's in the Sauce

For traditional pulled pork sandwiches, the naked pulled pork is dressed with a sauce, which is responsible for the big bold flavor customers crave. The sauce allows you to change the flavor profile dramatically with the flip of a ladle.

- Kansas City Style: What most people in the country consider to be ‘barbecue sauce.’ Thick, ketchup-based, sweet and tangy. Sometimes molasses and brown sugar are used for more sweetness. To cut the sweetness, mustard, chili peppers or vinegar can be added.

- Memphis Style: Has some components of Kansas City style, but thinner and with more tang. The spice is more defined, and caramelization (if cooking with it) is easier because it is thinner.

- Eastern North Carolina Style: To those who grew up with BBQ sauce in a bottle, this is almost not recognizable as barbecue sauce. Vinegar, black pepper and hot chile pepper make up the sauce in its simplest form.

- Western Carolina Style (aka Lexington Dip or Piedmont Dip): With the same vinegar as Eastern style, but with added tomato in the form of tomato paste, sauce or ketchup, to soften the sauce and make it thicker.

*note: BBQ sauces are fiercely debated and the differences can be marked from one zip code to the next. This list is only a starting point.

While it's hard to beat a great pulled pork sandwich, it would be a shame to limit its use to the bun. At Progressive Field in Cleveland, fans this summer will find nachos topped with pulled pork in the stadium's Market Pavilion. The “Major League Pizza” concept will feature several new pizzas, including one cheesy pizza piled high with sweet, sticky, barbecued pulled pork.

And Asian-inspired pulled pork sandwiches are an umami-packed addition to the stadium's menu, in keeping with today's premium food trend at such venues.

Pulled pork also easily switches flavor profiles at the University of Oklahoma. A local, vinegar-based barbecue sauce gets slathered on the pork for classic pulled-pork sandwiches on Kaiser rolls at the Sooner Smokehouse, where sandwiches are ordered on the line, but it's simple to take the pork in an entirely different direction.

Some of the tender pulled pork gets tossed with a Hoisin sauce and placed in Asian lettuce wraps at another concept, Shanghai Stir Fry.

“We grill a corn cake (basically a soft, pancake-shaped piece of corn bread), then top it with pulled pork, a mustardy sauce, and top that off with coleslaw.”

Smokehouses are a favorite place in Oklahoma, and at OU, students can find the same ‘fixin's,’ or perfect accompaniments to pulled pork, at the Sooner Smokehouse concept: coleslaw (which can be added atop of the sandwich for a cool, creamy compliment), potato salad, baked beans, okra, onion rings, and roasted 3" pieces of corn on the cob, which are cooked in the smoker.

Other fixin's might include corn bread, sweet potato dishes or even French fries.