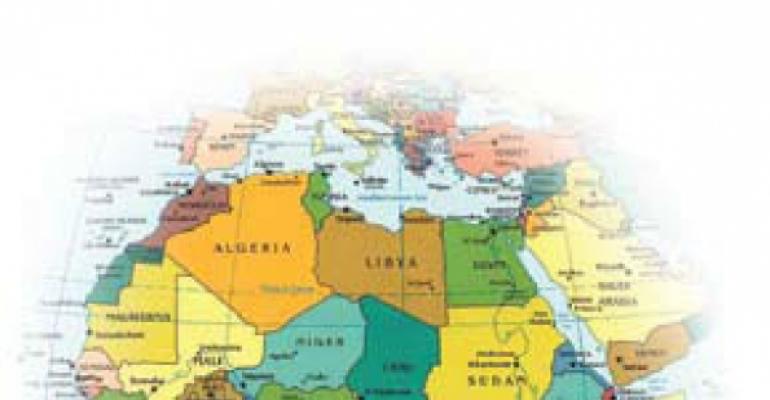 Africa: One Land, Many Cuisines

Africa, the second largest and second most populous continent in the world after Asia, straddles the equator, its climate ranging from tropical to sub-arctic on its highest peaks.

With 53 countries, definitively classifying African cuisine is impossible — one country is practically vegetarian while another thrives on meat recipes. Generally speaking, the hallmark of native African meals is the use of starch as a focus accompanied by a stew containing meat or vegetables, or both. Maize (corn), cassava, millet, beans, yams and peanuts are key ingredients and traditional green vegetables occupy an important role in household nutrition.

In North Africa the Phoenicians of the First century brought sausages and the Carthaginians introduced wheat and its byproduct, semolina. The Berbers adapted this into couscous, one of the main diet staples. Olives and olive oils were introduced before the arrival of the Romans.

In the 7th century, Arabs introduced a variety of spices, (saffron, nutmeg, cinnamon, ginger and cloves). Later the Ottoman Turks brought sweet pastries and other bakery products, and from the New World, North Africa got potatoes, tomatoes, zucchini and chiles.

In the inland savannah of East Africa, meat products are generally absent. Cattle, sheep and goats are regarded as a form of currency and a store of wealth, and are not usually consumed as food.

Here, too, Arabic influences are reflected in the Swahili cuisine with pilaf dishes, the use of sweet spices, and pomegranate juice. The British and Indians brought spiced vegetable curries, lentil soups, chapattis and a variety of pickles. And the Portuguese who brought the techniques of roasting and marinating also introduced oranges, lemons, limes, and “exotic” ingredients like chiles, peppers, tomatoes, pineapple, bananas, and the domestic pig.

Central African cooking remains the most traditional though there is the widespread adaptation of cassava, peanut, and chile pepper plants which arrived along with the slave trade during the early 1500s.

The basic ingredients here are plantains and cassava. Fufu-like starchy foods (usually made from fermented cassava roots) are served with grilled meat and sauces. Beef and chicken are favored but game meat preparations containing crocodile, monkey, antelope and warthog, are also served occasionally.

A typical West African meal is heavy with starchy items, light on meat and generous on fat with a high use of hot spices. Favored ingredients include rice, peanuts, black-eyed beans, brown beans, root vegetables, plantains, green peas, okra, citrus fruits, and pineapples, which are legacy of slave ship traffic between Africa and the New World.

During the pioneering days of the 19th century, new foods such as biltong, droë wors (dried sausage) and rusks evolved locally out of necessity. Meat products include lamb, and game like venison, ostrich, and impala as well as a large selection of seafood. South Africa's most unusual meat is called Biltong. It is a spicy form of jerky, wind-dried, used in traveling, snacks, and can be found not only country wide, but throughout the continent.

For a list of festivals go to www.africa.net. For general month-to-month listings go to goafrica.about.com/od/africafestivalsandevents/African_Festivals_and_Events.htm; for events in South Africa go to www.southafrica.info

Ingredients carried from the New World to Africa and back influence many menu items we see in the American South today. Fufu, a stiff cornmeal or yam mush, is related to spoonbreads and cornmeal. Porridges and ground millet, sorghum, teff, barley, and cassava flour make up the fritters, batters, flatbreads, griddle cakes, and grits popular throughout the U.S.

Regale your customers' ears with various African music styles, delight them with colorful art and entice them to the table with regional specialties like Doro Wat, a warming stewed chicken dish from East Africa; Morrocan couscous from the North; a spicy fish and meat stew from the West; or an Angolan egg and coconut pudding from the South. Go to www.africaguide.com/cooking for recipes and more cookbooks.

In an African Kitchen

General recipes to regional specialties abound in the pages of these cookbooks.

The Soul of a New Cuisine: A Discovery of the Foods and Flavors of Africa by Marcus Samuelsson, Desmond Tutu, Heidi Sacko Walters, Gediyon Kifle (Photographer), 2006, Wiley, John & Sons, Incorporated, $40.00.

*U.S. Basmati or U.S. Jasmine rice may be used in this recipe.

Recipe from the USA Rice Federation

In an African Pantry

A typical pantry needs a few additions in order to cook authentically African. Here are a few ingredients to add and some terms you may come across in your recipe research.

Baobab tree. Common leaf vegetable throughout mainland Africa. The dry pulp of the fruit, after separation from the seeds and fibers, is eaten directly or mixed into porridge or milk. The seeds are used as a thickener for soups, may be fermented into a seasoning, roasted for direct consumption, or pounded to extract vegetable oil.

Cassava: The soft-boiled root has a delicate flavor and accompanies meat dishes, or is made into purées, dumplings, soups, stews, and gravies. (Gari is the name of the starch from the cassava.)

Foofoo (fufu, foufou): made from starchy root vegetables like mashed yam, cassava, or yam, corn, and plantain pudding. It can also be made from cereal grains or plantains.

Niter Kibbeh: Clarified butter to which nutmeg, cinnamon, and cardamom seeds are added (with turmeric for color), browned, strained and used as seasoning and cooking oil in Ethiopia.

Plantain: a starchy banana, cooked like a root vegetable.

Sorghum: cane like grass with a small cereal grain (similar to millet)

Teff: the smallest grain in the world, is high in protein, carbohydrates, and fiber and is gluten free (see photo above).