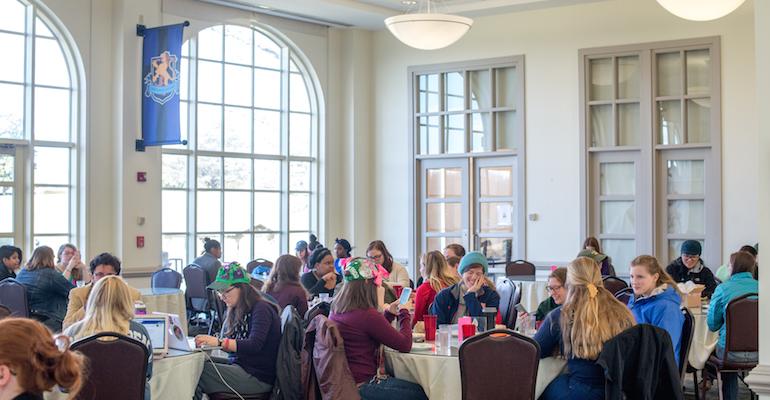 <p>Students at Sweet Briar&#39;s Prothro&nbsp;dining hall. The college almost closed, making it necessary for the dining team to work quickly, but they took time to honor the past as well.&nbsp;</p>
Menu Trends

A historical cookbook helps bridge the gap between past and present.

Last summer, Sweet Briar College was in limbo. The 114-year-old women’s liberal arts school in Virginia was facing financial challenges, cited by the Sweet Briar board, which suddenly announced a plan to close the school. Shockwaves went through the community, and soon a fiercely loyal alumni group was raising money, the legal system was involved and a venomous fight played out across the media, including in the New York Times.

Ultimately, the effort to save Sweet Briar succeeded, and with just over a couple weeks until fall semester, the school was set to reopen.

When the closure was still pending, all but a few of the foodservice employees sought and found other work. In August, foodservice contract management company Parkhurst Dining was brought in and tasked with assembling a whole new staff.

Robert Loconsole, newly hired general manager, hastily made the move from Baltimore where he’d been director of retail at the Maryland Institute College of Art and moved to the bucolic campus. He had just days to do the work that was cut out for him.

“We needed two new retail menus and also a menu for our main dining hall and we needed to restructure our catering program,” Rob says, emphasizing the tight time frame. “We took over on the 11th and we had athletes arriving and catered events that started on the 18th. Our executive chef started on the 18th.”

Loconsole relied on help from the few remaining Sweet Briar staffers and also the Parkhurst team at nearby colleges, getting ideas for which concepts had been working well with college diners in the region. Soon, he was setting up a revamped coffee shop and renewing a connection to local dairy products, including ice cream made with cream from a local dairy.

That spirit of renewal was soon joined by a strong connection to the past.

Not long after arriving on campus, Loconsole put on a catered event for some alumnae who invited him to sit down. They then began to talk about their favorite old Sweet Briar foods.

One alumna made sure that a copy of the Sweet Briar community cookbook that was published in the early 1990s made its way into Loconsole’s hands. The cookbook, “Tastes Remembered: A treasury of recipes from the good cooks of Sweet Briar College,” isn’t that old, but some of the recipes inside are.

Sweet Briar College was founded in 1901 by Indiana Fletcher Williams, who bequeathed her estate to establish Sweet Briar College. “Miss Indie” dedicated the college to the memory of her daughter, Daisy, who died when she was just 16.

Excerpts from Daisy’s diary entries are scattered throughout the cookbook, and it’s apparent that she loved to learn and also loved to cook. On a Tuesday in 1880, when she was 12 years old, Daisy wrote: “It is raining this morning and very dark…I am getting along very nicely in fractions and translate my French to Mama every day…I made angel cake in the morning. It would have been very good but it did not get done though.”

The forward of the cookbook states “and so we continue the tradition, begun by Daisy and Miss Indie so long ago, of passing on the tastes we remember.”

Now the culinary tradition has been entrusted to the culinary team, who have been busy recreating dishes like cheese Betty (similar to an egg strata but with whole pieces of bread rather than cubes), Sweet Briar cookies (delicate, meringue) and
Melvin’s casserole (with mayonnaise and squash).

“We tried to put some things on the menu that would be a little nostalgic and we’re being very faithful to each recipe,” Rob says. “There’s a lot of history here. What we’re really trying to do is integrate the old with the new.”