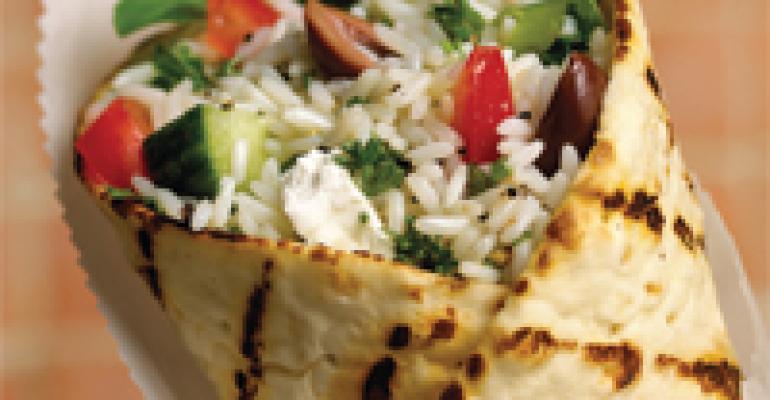 The notion that a bona-fide menu trend can only take flight from the platform of fine dining was challenged decidedly with the advent of the wrap sandwich about 15 years ago. What put the wrap on the map, so to speak, was its breakneck rise in popularity in the Mexican quick-service segment almost immediately upon debut.

Now found in every foodservice segment (even fine dining) and speaking virtually every tongue, the wrap proved to be a true menu trend. Thanks to Americans' eternal search for something novel — not to mention tasty, convenient and affordable — the wrap also proved that trends can trickle up as well as down.

“Wraps are featured in nearly every kind of menu we have,” says Scott Rattan, executive chef at Capital University in Columbus, OH, for Parkhurst Dining Services, which operates retail outlets and concessions in addition to the meal plan serving 1,100 students.

“They're are an integral part of our to-go programs,” he says. “Our students can build their own wraps with flour or flavored tortillas, pitas, lavash and other flatbreads. And, they're easy to handle. You can put even messy things in one, roll up like a burrito, and you're on the go.”

Indeed, interest in wrap sandwiches can be attributed, at least in part, to customers' increasing demand for flatbreads. According to the most recent Chef Survey conducted by the National Restaurant Association in conjunction with the American Culinary Federation, flatbreads such as tortillas, pitas and lavash rate 21st among 208 foods and beverages as a “hot trend” for 2009.

At Capital University, wraps' popularity has propelled over the last five years. “Wraps have the image of being healthier, and in most cases are,” Rattan says.

One of the most popular offerings on Capital University's catering menu is the Chicken, Lentil, Apple and Curry Wrap. “We get nothing but good feedback on it,” Rattan says. “It's nothing too fancy, but the flavors work well together. That's the nice thing about one — you can put anything in it. I used to have an apple-curry soup, and I thought it would be wonderful to marry those flavors with chicken and lentils in a wrap. That's what inspired the recipe.”

“Wraps serve as a great ‘container’ for all manner of flavors, from Latin directions to Indian, Mediterranean and Asian, and as a vehicle to deliver convenient, hand-held salad combinations like our Chopped Turkey Cobb Salad Wrap,” says Bill Mitchell, senior director of brand management for Sodexo Corporate Services based in Gaithersburg, MD.

Mitchell is a fan of wrap sandwiches for an additional reason.

“Besides their portability and ease of use — they're easy to eat — wraps generally deliver on the operations side, as well. They help operators control portion costs while delivering great value for the customer.”