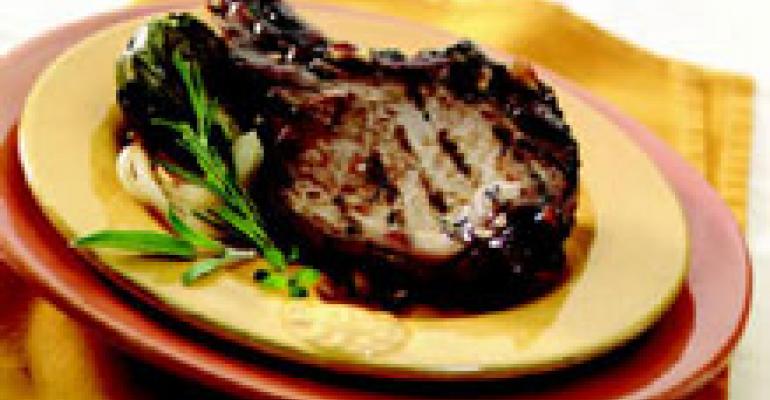 It's that season again. Time to haul out the gas grills, spruce up the outdoor tables and chairs, and hone lunch and special events menus to accommodate customers' seemingly insatiable hunger for all things barbecue.

Annual warm-weather barbecue theme events can be some of the most successful promotions of the year. Cooped up indoors all winter, many customers are dying to get out and enjoy the sunshine while noshing on any number of grilled-to-order main dishes and traditional sides.

Deep in the Heart of Texas
At Texas A&M University, in the heart of BBQ country, they take the idea a step further by bringing a competitive edge to the gatherings. “Barbecues are a staple in Texas, but I think what sets some of our events apart is that we do many in conjunction with a barbecue contest,” explains Associate Director Cynthia Zawieja.

Twice a year, at the annual Parents' Weekend in April and at First Yell, the university's opening home football game in the fall, up to 20 teams come together on campus for the contests. They're comprised of diverse groups— from university employees, parents' club members, alumni, students and foodservices staff to commercial caterers— and they all compete for bragging rights to the first, second and third place finishing in the categories of best brisket, sausage and chefs special. Students in various campus organizations act as the judges.

The barbecues make for an unusual twist on feeding large numbers of people. In several ways, the foodservice department catches a break with this approach: Student groups coordinate all the paperwork and logistics for the contest entry; each team is required to provide its own smoker, equipment, and any special ingredients needed for sauces or rubs; and the university's risk management department is on hand to distribute sanitation solution and buckets and to make sure all participants follow health department guidelines.

For foodservices, that leaves providing the meat to each team for their cook-off, as well as setting up a tent to provide side dishes and beverages. “We issue the meat to all the teams (up to 200 lbs. each, if needed) to make sure it's a fair competition,” Zawieja says. “They show up the afternoon before the event to set up and start smoking their meat, and it just becomes a big party for them and everyone else involved.”

To offset the costs of the contest, teams pay an entry fee of $200.00, and guests buy $7.00 tickets to get in and sample the wares. “We find out beforehand how much meat each smoker can accommodate, then we know if we will need to cook any additional meat ourselves, in order to have enough food for 5,000 or so people,” Zawieja continues.

There are challenges to this approach, she acknowledges, although they're mostly the same ones that arise from staging any outdoor foodservice event—concerns about “heat, flies, natural elements, and keeping cold foods cold.” But the benefits are great, she claims. “We don't have to coordinate the process, since the students do that, and we don't have to cook the meat for all those people. Instead of just a foodservice-specific event, it becomes a fun, outside activity, with interaction among all the teams and guests.”

Themed barbecues
At Fletcher Allen Health Care in Burlington, VT, outdoor barbecues, staged about five times a month during the summer at rotating locations around the campus, get a lively touch with themed menus. They range from Jamaican barbecues, which feature jerk chicken and grilled vegetable and fruit kabobs, to an Asian event with Chinese ribs, to pride-of-New England festivals.

For this year's opening barbecue, Executive Chef Richard Jarmusz set up a Maple Fest, with maple baked beans, maple mustard turkey burgers (see recipe), maple chicken sausage, and meats and chicken breasts with maple barbecue sauce. “We try to use as many local ingredients as possible, and celebrate Vermont products,” he notes.

So popular are the summer barbecues, in fact, that they proceed even in the rain, when the department pulls out tents to keep the customers dry. “It rained on the final barbecue of the season last year, but we didn't let it get our spirits down,” says former Manager of Dining Services Kevin Brown. “We just played it up and decorated with duck decoys. The customers loved it.”

Craig Mombert, executive chef at Davidson College in North Carolina, presents barbecue themed meals about three or four times a year. “They're some of biggest-drawing events for us, since they tend to bring in lots of staff and faculty,” he says, noting that counts increase by about 100 each barbecue.

This year, one such event was a Southern Feast, coordinated with members of the Black Student Coalition. The meal included barbecue chicken, corn on the cob, collard greens, baked yams, and green beans with smoked ham hock, along with fried catfish and macaroni and cheese. “It turned out to be a big hit,” Mombert says. “The students really got into the menu planning process.”

One side benefit of barbecues is the welcome “attitude adjustment” they elicit from customers. As Mary Keysor, M.S., R.D., director of food & nutrition services at Maine Medical Center in Portland, points out, “Employees never want to stand in line indoors at the retail section, but when it comes to getting their food outside at the grill, suddenly, no one minds waiting.”

A tradition at the medical center, the summer barbecues take place twice a week over a three-month period in a tree-shaded courtyard in the heart of campus. “It's all very low-tech and unsophisticated, but that's part of the appeal,” Keysor explains. “We've just got a big gas grill under an awning, with a cart with condiments and sides, barrels of soft drinks and water, and at the end of the line, a cashier sits under an umbrella with a cashbox. The simplicity makes people feel good. Employees stand in line side by side with the CEO, and it's different and relaxing.”

Gerry Goulet, manager of retail services, notes the menu is kept simple as well, with burgers, hot dogs, chicken, and occasionally grilled sausages and peppers. This year, the department planned to introduce grilled vegetables as an additional entrèe selection. “We'll offer a six-ounce serving of a variety of vegetables, from zucchini to peppers and summer squash,” he says. Sides include standards such as coleslaw, tossed salad and chips as well as a homemade baked beans special, all sold a la carte.

One challenge arose when employees complained about excess smoke billowing into their windows when the burgers were cooking. “We solved that by switching from raw patties to a pre-cooked patty, so we don't have the fat from the raw meat hitting the flames and creating the problem,” Keysor says. “That not only curtailed the smoke, but sped up the line, too, because basically all we're doing is warming up the patties now.” Using the same approach, chicken breasts are pre-cooked that morning before being put on the grill “for show and to get the grill marks.”

Even some patients—by invitation only, depending upon their individual situations—get to join in on the barbecue festivities, which generally draw an extra 200 to 250 customers on those days. “It does take four extra staff members to implement, and every year as budget time rolls around, we ask ourselves, do we still want to do this—just to bring in an extra $400 to $600?” Keysor muses. “And the answer is always, yes. Not everyday, but twice a week is just right. Employees and customers just love it, and we're providing them not just food, but an experience.”

To view the recipes that originally appeared with this article, click here: