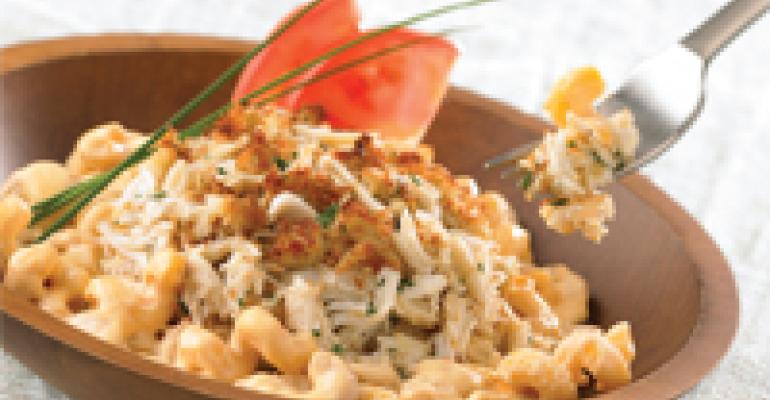 Customers discover adventure in a meal when tasty ingredients deliver comfort and convenience in a single bowl.

At the start of the latest term, St. Norbert College in De Pere, WI, began using Twitter to let students know when its mashed-potato bowl is being served. So popular is the action-station offering introduced last year that the college doubled the bowl's presence on the four-week rotating menu.

“It's good, homestyle food that warms the cockles of students' hearts,” says Daniel Froelich, executive chef, who was inspired to offer the mashed-potato bowl following the success of KFC's Famous Bowls line that launched in 2006. Indeed, SNC's mashed-potato bowl reflects a similar KFC offering featuring breaded fried-chicken bites atop mashed potatoes and corn kernels, with chicken gravy and a crown of shredded cheese.

Mealtime counts go up when the college offers the bowl. “I couldn't get rid of the dish even if I wanted to,” Froelich says. Noodle bowls are more recent, and the 1,800 students on the meal plan like them, too. “We're trying to do more ethnic and street foods, and bowls are easy for us. The students just love them. Anytime you can give them something freshly prepared that they don't have to dish up themselves, they really enjoy that.”

Next on the menu? An ono (“delicious” in Hawaiian) rice bowl featuring boneless buffalo chicken wings and a sauce of soy, pineapple and brown sugar over fried rice. A chicken tikka-masala bowl with basmati rice and sautéed green beans and a Korean beef and rice bowl will also join the rotation.

Besides the fact that our early ancestors ate this way at every meal, one-bowl meals maintain their appeal today because they “offer a multi-dimensional meal in one convenient package,” says Robert Danhi, CCE, CHE, CEC, CCP, principal of Chef Danhi & Co., Inc., in El Segundo, CA, and author and photographer of Southeast Asian Flavors: Adventures in Cooking the Foods of Thailand, Vietnam, Malaysia & Singapore (Mortar and Press, 2008), which was a James Beard Foundation book award nominee this year. “It's comforting to know everything you need is there, and some like the thought of being able to mix it all up and dig in. The searching for those items you love is like a discovery of tastes, textures and colors — an adventure in a bowl.”

Such adventure is easily delivered with a hearty and satisfying bowl of chili, a bold gumbo, and even a cold breakfast cereal. Indeed, any meal that says “fresh” with comfort and convenience and that also can be served in a single bowl speaks to the current trend.

The tortilla-less burrito bowl at Swedish Medical Center was also inspired by a popular chain offering. Just like at Qdoba Mexican Grill, diners at the full-service cafeteria at any of the three SMC hospitals in Seattle may opt to “go naked” with typical burrito ingredients in a 24-ounce bowl as an action-station option.

“Our clinical manager said this would be a great idea for people who don't want that tortilla,” says Eric Eisenberg, executive chef of the hospital system's foodservice that includes patient meals, off-premise catering and F&B at SMC's conference center. “We're a healthcare organization, and the burrito without the tortilla is less heavy. We're looking at replacing the rice with fresh greens as another customer option.”

That “less heavy” burrito bowl is nonetheless a pound of food, which, at $5.75 (the same price as traditional burritos offered), spells value for patrons. It's valuable to the self-op, too: Sales at the burrito station exceed those of all other stations, and the bowl option is 35 percent of total burrito sales. “I think when we add the greens option, we'll exceed that,” Eisenberg says. “It will be like a taco salad without the taco shell.”

Unless it's made on premise, the tortilla is Eisenberg's biggest expense in a burrito, even more than the meat. From a profit perspective, “it's a benefit to me when people go with the bowl,” he says.

“Frito Pie is a New Mexico favorite, and even students from out of state expect it on the menu,” Provost says. “It's comfort food. We give it the added touch of our own chili sauce, plus, we serve it with a green-chile bread pudding on the side for a little sweet-hot bread-dessert. It came from a family recipe of our baker, and it accompanies the Frito pie really well.”

Evanston Township High School District 202 just north of Chicago introduced its own version of KFC's mashed-potato bowl last year and a burrito bowl inspired by Chipotle Mexican Grill more recently, and both bowls became instant hits with 9th- to 12th-graders, says Kim Minestra, assistant director of nutrition services. Each bowl is menued once every three weeks, and what makes the bowls a win-win for everyone is the fact that Minestra's team was able to recreate popular restaurant fare to meet school nutrition guidelines.

When seeking a second bowl concept last semester to mimic the success of the mashed-potato bowl, Minestra looked no further than a local chain unit. “We had done an Asian rice bowl that wasn't a big hit, so we decided to try something that we'd seen advertised,” she says. “We went to Chipotle for lunch one day and got some ideas for little touches, like adding cilantro to the rice. Those little things help our burrito bowl pop and give it more flavor.”

Minestra's school serves about 1,000 of the 3,100 students on the open campus, and both the mashed-potato and burrito bowls are served from the line. The mashed-potato bowl, which consists of popcorn chicken, mashed potatoes, corn, chicken gravy and reduced-fat cheese, weighs in at a respectable 404 calories per serving with 19 grams of fat, 4 grams of which is saturated fat. Burrito bowls, which are offered in shredded chicken and pork and taco-beef varieties, feature 3.2 ounces of meat with brown rice, refried beans, shredded lettuce, black beans and corn, cheese and salsa, yet contain only 313 calories per portion, with under 12 grams of fat (seven grams of which is saturated), although fat and calories increase somewhat with the choice of sour cream or Southwest ranch dressing that students drizzle from squirt bottles.

“What happens a lot with new items is that they're exciting at first, and they then teeter off,” Minestra says. “But this time we're adding a bit more choice, especially to the burrito bowl, and we're advertising in front of the sneeze guard and explaining that students can choose one of this, two of that. The bowls give students choices, so we're not just plopping items on the plate.”