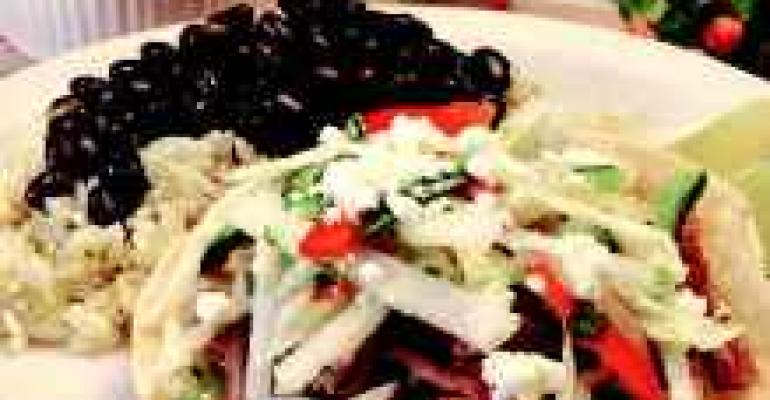 When Eric Lenard, chef and manager at University of Washington's Husky Den (the Student Union), decided to introduce some more complex, traditional Mexican dishes to his customers, he could easily have added them as specials at the popular "Coastal Taqueria" station, which daily cranks out prodigious amounts of burritos, tostadas, nachos and tacos.

Instead, he opted to showcase his line-up of moles, Yucatanstyle roasted pork and turkey in banana leaves, homemade tamales, and fajitas in the "At Home" station, the Den's designated comfort food spot."These dishes are very savory and delicious – true comfort food," Lenard explains. "It just made sense to feature them in the comfort food station."

The specials, originally created for a Cinco de Mayo theme event, proved "overwhelmingly positive" among customers, convincing Lenard to wrap several of the recipes into At Home's regular rotation. To complete the meals, Lenard menus a Mexican cucumber/jicama/orange/chipotle salad for a side, and creamy coconut flan with marinated fruit for dessert.

Cuisine of the Americas
A twice-weekly Mexican feature at UCLA Medical Center's International Corner is a mainstay at the site's Cafè Med, regularly selling 350 tostadas at a pop, along with plenty of tacos and other wellknown Mexican favorites. "We could never take those tostadas off the menu–there'd be a riot," claims Executive Chef Mark Dyball.

So when he decided to "diverge and delve into some traditional Latin specialties," Dyball turned to the regular entrèe line to unveil his new, weekly "cuisine of the Americas" theme.

Since September, customers have especially looked forward to Wednesdays, when Dyball and his chefs bring out four different Latin entrees, such as whole sides of salmon Veracruz, wrapped and baked in banana leaves and sliced in front of them on the line; whole slabs of Oaxacan pork ribs cut and portioned as customers wait; birria, Mexican stew; half chickens marinated in beer, onions, garlic, cumin and spices, then roasted (see recipe for Chicken Tampiquena); varieties of fish with chipotle and tomatillo sauces; homemade tamales; and marinated and charbroiled skirt steak fajitas. Complementing the main dishes are savory sides like soft spoon cornbread and homemade beans and salsas, along with salads of beet root/cabbage/ jicama/pineapple or Mexican melon with bleu cheese and chiles.

For $5.30, customers pick an entrèe, two sides and a beverage. "This is really driving the menu for Wednesdays," Dyball says. "The only difficult part is for the customer–it's hard for them to choose just one entrèe."

"We already had a program in place that periodically featured chefs from local restaurants, so we immediately added her to the rotation," he says. "Customers love her food."

Serving up authentic specialties such as posole (hominy and pork stew), chayote with carrots and onions, homemade guacamole and enchiladas, tinga de pollo (chopped chicken with onions), birria, and salads made with cactus paddles, Rocha's menus pump up sales by 15 to 20 percent when featured every couple of months.

"She goes to the specialty shops and gets a lot of the ingredients herself, so that everything is very authentic," Howell explains.

After four years in the guest restaurant program, Rocha is still one of the event's biggest draws. For more ideas, try some of the recipes on the following pages.