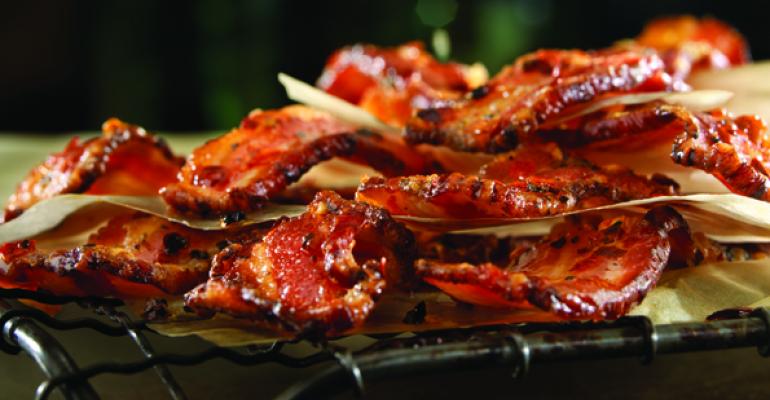 Everything is Better with Bacon

RELATED: Beyond The BLT &nbsp;

From bacon milkshakes to bacon candy to bacon martinis, today’s best chefs have come up with countless recipes to showcase the crisp, salty and sweet meat.

New ideas and venerable classics alike tap into perhaps the quintessential carnivore’s truism: Bacon makes everything better. Its versatility is second only to its deep, smoky flavor.

“Bacon has an ability to bring out and amplify the flavors of whatever it is paired with,” says Chris Koetke, vice president of the Kendall College School of Culinary Arts. “Historically, bacon was prized because of the preservation technique (You’ve just slaughtered an animal...what do you do now? Smoke it.) and because of the fat. You couldn’t buy a bottle of olive oil 150 years ago.”

Present day, Koetke laughs when bacon is called a trend, but he allows that there’s definitely been a widespread realization that “this is a commodity, but it’s so much more than a commodity.” 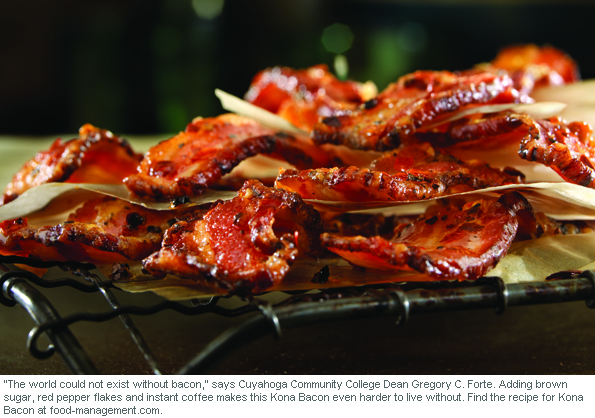 Using bacon as a seasoning, rendering flavor from the fat early in the cooking process and a bit of letting your imagination run wild will expand bacon menu horizons and yes— make everything better. Don’t forget riffing on the BLT for some truly trendy results (see Beyond The BLT).

Making the Most of Bacon Flavor

Coaxing the most intense flavor out of bacon can lead to us- ing less of it, a good thing, since fat is no longer quite as prized as it was in the 1800s.

Here are a few chefs’ favorite methods for getting the most bang from bacon:

“Render the fat—bake off the bacon for the cafeteria in the morning, and then use the fat throughout the day to sauté things instead of butter,” says Finney.

“I save bacon fat pan drippings like I used to see my grandmother do,” says Benjamin Jenkins, catering chef at San Diego State University. “I use it to saute Brussels sprouts. The students have gone crazy for them.” (see the recipe, Sauteed Brussels Sprouts in Bacon Fat at food-management.com).

There are many bacon-powered menu items on the catering menu at SDSU: Bacon cups that can be filled with eggs or French toast and maple syrup, and the TJ (Tijuana) Hot Dog: bacon wrapped around a hot dog that is griddled on a flat top, then topped with shredded lettuce, hot sauce, jalapenos, sour cream and cheese. “The TJ is really good, and I thought it couldn’t be beat, until I visited Norway last month and found a cheese-filled hot dog wrapped in bacon—amazing!”

Using bacon fat to make a roux will impart that unmis- takable flavor into the roux and, in turn, any of the countless sauces or soups that take off from that point, says Gregory C. Forte, dean and general manager, Hospitality Management Center, Cuyahoga Community College, Cleveland, OH.

Many of Forte's students work at Pura Vida, an open-to-the- public restaurant on Cleveland’s Public Square, and a recent grilled-cheese-with-bacon menu item featured bacon that is smoked in-house.

When making a split pea soup or a bean soup, first rendering chopped bacon in a tall pot sets the stage for rich, deep flavor. And adding a bacon rind to a chowder or stew as it simmers is another way to maximize flavor, says Finney, who serves a lot of chowder.

Chopping or grinding up the bacon in a partially frozen state is another way to get even more flavor out of the same piece of bacon. (Putting bacon in the freezer for about 15 minutes before slicing gives you an edge in chopping.)

“If you just threw whole pieces of bacon into a soup, you would still get flavor,” Forte says, “but think of it as crushed ice. What gets your drink colder faster, ice cubes or crushed ice? More surface area makes the difference.”

On the flip side of not wanting too much fat, adding fat and flavor with bacon keeps very lean proteins from becoming dried out.

“I use a lot of bison and turkey—very low fat meats,” says Finney, who grinds bacon together with bison for a burger that’s been a hit on the menu.

In instances where less fat is desired, it makes sense to think of bacon is a seasoning rather than the main event— don’t worry, the flavor of bacon really doesn’t take a back seat.
Jenkins learned to think of bacon as a seasoning from a South Carolina chef who, when asked what his favorite herb was, replied with: “Bacon.”

“It’s almost like putting salt on something, the way you add salt to bring out the flavor,” Koetke agrees. “Bacon can be roasted, dried out and turned into powder. Saute fish and sprinkle it with the powder for a whole new depth of flavor.”

Bacon Desserts? Sweet! And why not? Bacon’s smoky, salty flavor is the perfect foil for a few sweet ingredients in particular (chocolate, maple cream, ice cream), making des- sert menus that much better.

"Could bacon have a role in apple pie? It makes sense," says Koetke, and with that, another wild bacon scheme is born.